Ten things your camera can see that your eyes can’t

Often in photography, the problem we feel we have is that the photos we take don't match what we saw at the time. The way the camera works is quite different from the human eye. While there is nothing wrong with trying to capture what you saw, have you ever thought about using your camera to capture what you can't see?

In this article I'll cover 10 things that your camera can see but you can't, with an added bonus point at the end. Capturing photos that don't exactly match what you see with your eyes can often give stronger images than just an exact record of reality. 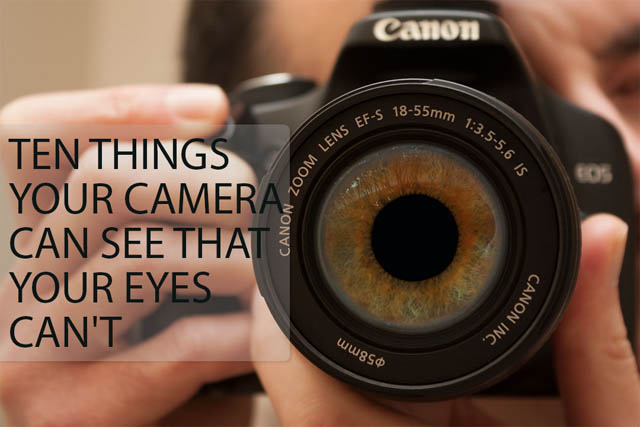 Although the human eye is able to observe fast events as they happen, it is not able to focus on a single point of time. We cannot freeze motion with our eyes. With a camera, however, so long as there is enough light, we can freeze motion. We can even record events that happen too fast for the human eye to see them. 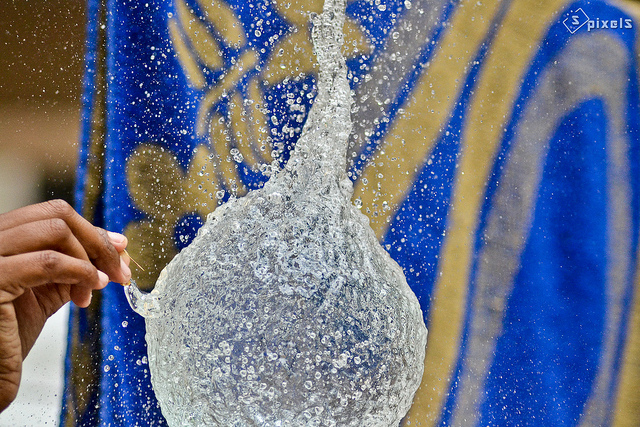 Generally, recording fast action is mainly used in Sports photography. The idea is usually to record the moment of 'peak action', just as the ball is hit or about to be caught, the athlete reaches the top of their jump, or the winner crosses the finish line. The camera can capture 'the moment', while your eye cannot. 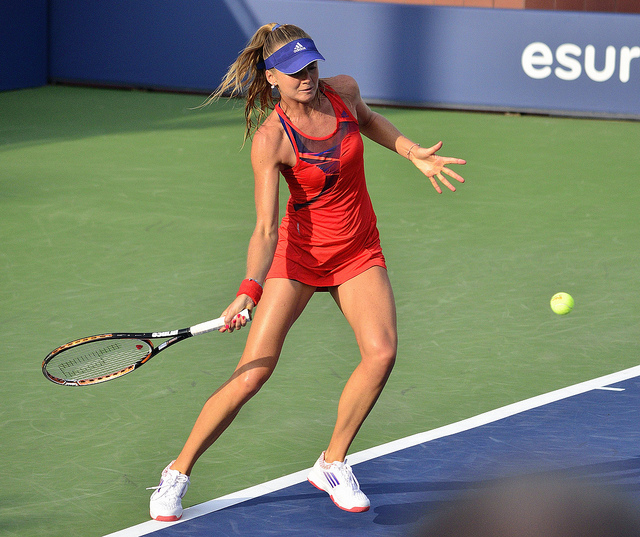 Combining flash with high speed photography allows capture of events that happen too fast for the eye to perceive. Things like the bursting of a water-filled balloon, or a light-bulb smashing on concrete.

Our eyes can see a small amount of blur when fast motion is involved (e.g. try waving your hand quickly in front of your face). However, a camera can record blur from movement over much longer periods of time. For example, a long exposure of blurred clouds moving across the sky, or blurred waves along a seafront. 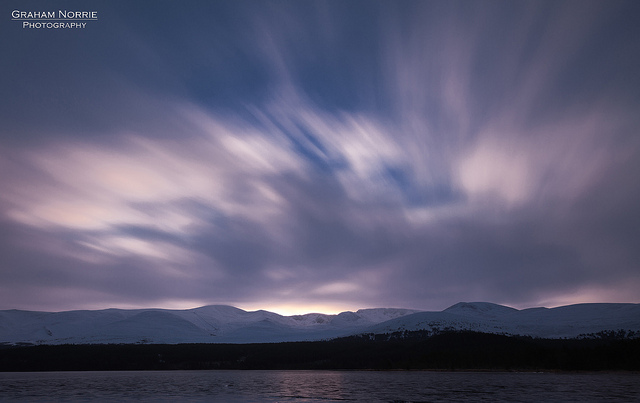 A camera can also record blur from movement by being moved itself. As long as the exposure time is not too short, then moving the camera will create blur. This can be used creatively in a couple of ways. 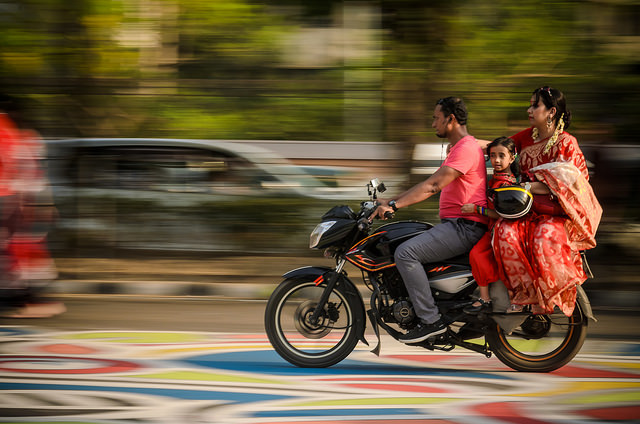 Another technique is to just move the camera to create blur across the whole image. This will often create a very soft, abstract, and often painterly photograph. 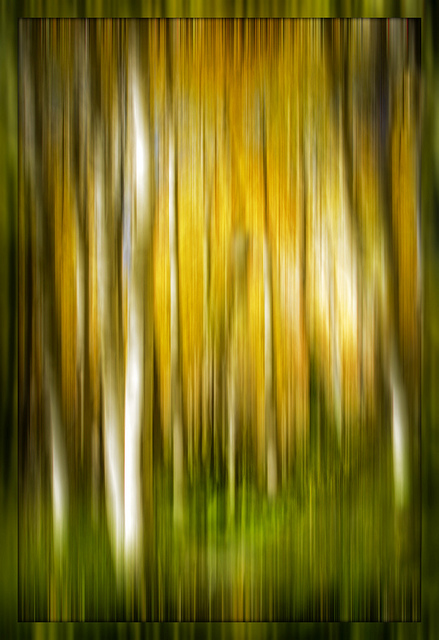 Achieve a shallow depth of field

It is possible to achieve a shallow depth of field with your eyes, but only by focusing on something very close. For example, hold your finger up in front of you, focus on it, and the background will blur. But you can't look at a person standing a few meters away and blur the background behind them like you can with a camera. 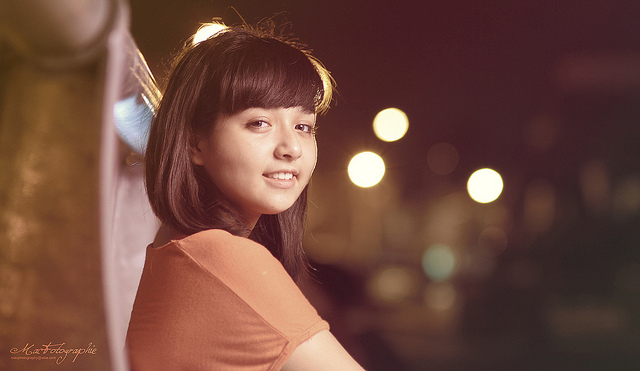 The larger the camera's image sensor, and the larger the maximum aperture of the camera's lens, the shallower the depth of field you'll be able to achieve. Most interchangeable lens cameras have fairly large image sensors, and have at least one 'fast' (e.g. f/1.8) lens available, which can help you achieve a much shallower depth of field than the human eye. This allows you to blur out the background behind your subject, drawing more attention to your subject.

In one sense, our eyes are better at seeing faint light than cameras. Stand under the stars on a clear night, and wait for your eyes to adjust to the dark. Then quickly look around at the sky, and you can see many stars.

Use a camera to take a quick single frame of those stars, and you are likely to only capture the very brightest ones. However, with the latest camera sensors high ISO capabilities we are getting quite close to matching the sensitivity of the human eye.

What a camera can do that the eye can't, is to collect light over a long period, and then use this to form a single image. By using a long shutter speed, we can capture very faint stars that the eye can't even see. Or the brightness of the light reflected from the moon can be built up over a long exposure to create an image that looks like it was shot in the daytime. 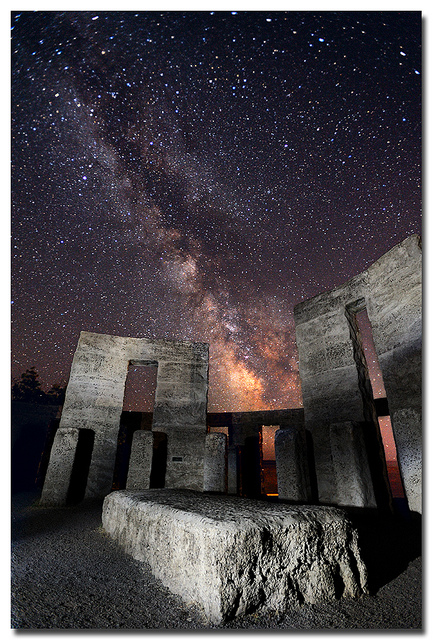 Use a very narrow field of view

Use of a telephoto lens with a digital camera gives you a very narrow field of view. This allows you to capture 'close' images of subjects that are some distance away. The human eye can't do this. 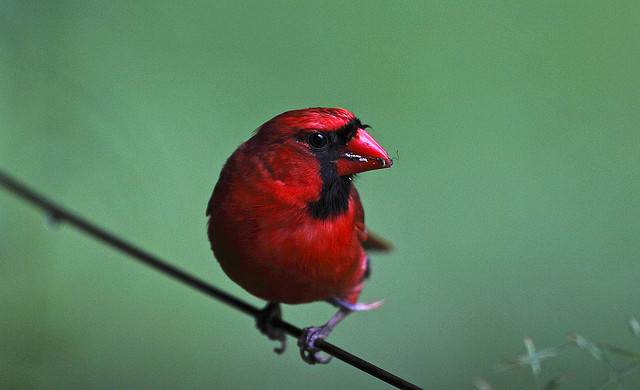 Telephoto compression is an effect of a narrow field of view. This describes the way that the background behind the subject is enlarged when using a telephoto lens, compared to shooting with a normal or wide lens. Again, another effect the human eye cannot achieve. 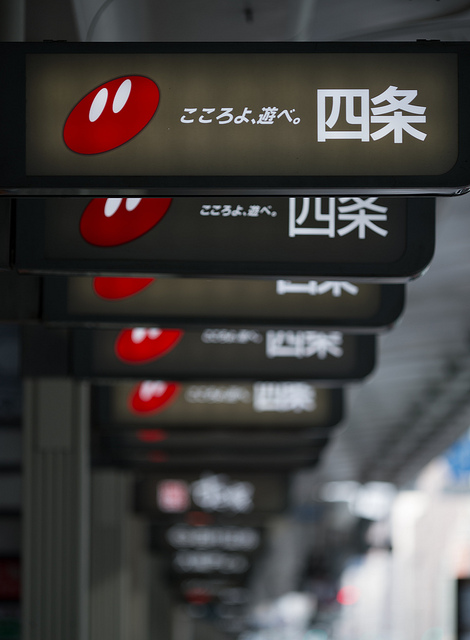 Use a very wide field of view

Carrying on from the previous point, the human eye cannot achieve a very wide field of view either. Using a wide angle lens can give you images that you just cannot see with the naked eye.

A wide angle lens has the opposite effect to a telephoto lens. Instead of items behind the subject appearing larger (and so, closer) to the subject, they appear smaller, and with more distance between them. This can be very useful to exaggerate perspective. 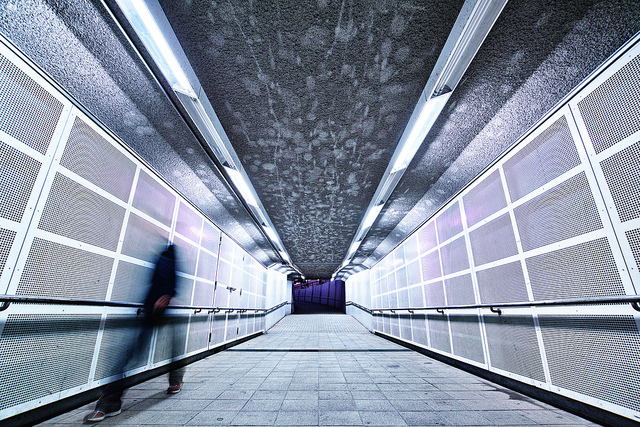 Get a wide and distorted view

A fisheye lens gives you an extremely wide field of view. Some even offer over 180° degrees of vision, meaning they can see behind themselves! The view is also distorted, so items in the center of the frame appear larger than those near the edge. If you place a straight line (such as the horizon) anywhere in the frame other than dead centered vertically or horizontally, the line will become bent due to the lens' distortion. 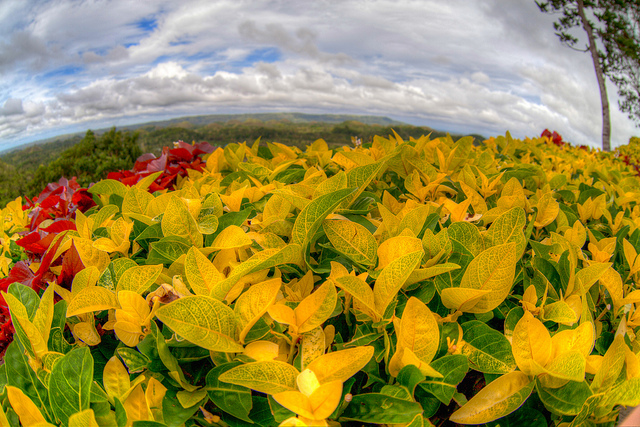 With our eyes we have neither such a large field of view, or such strong distortion. Fisheyes are very good for giving a view of the world quite different to what we see. Note that because of the wide field of view, you need to get quite close to your subject for maximum effect. 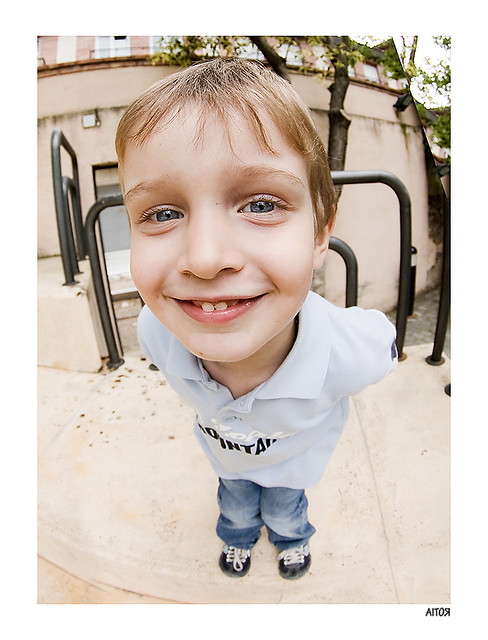 Our eyes are actually very good at discerning fine details. However, they can't focus close enough to see as much detail as a camera with a macro lens can. A macro photo can capture tiny details of plants and insects, opening up an alien world that you can't see with your eyes. 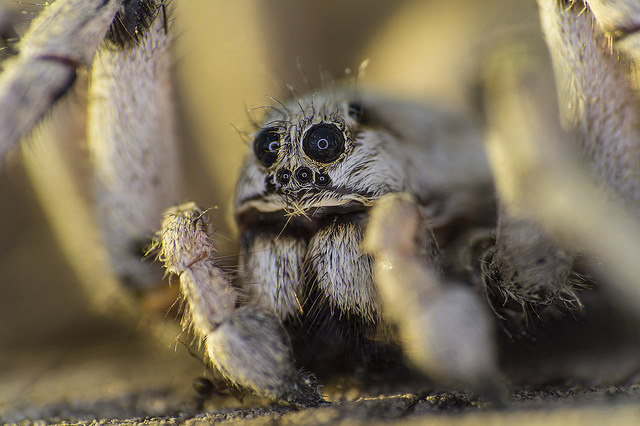 Even everyday objects can look very different when captured at the macro level, opening up image opportunities you never would have considered before.

See tone but not color

Black and White photography is still extremely popular today, despite the invention of color photography over 100 years ago. Our eyes always see in color (unless you suffer from total color blindness), reducing an image to shades of gray is not something we are able to do. 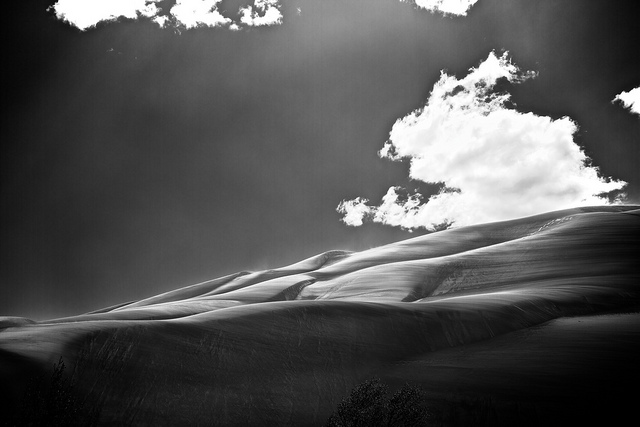 You can't change the way your eye perceives color - a blue sky will always look blue. You can, however, change the way that a camera sees color. The easiest way to do this is by simply using an incorrect white balance setting.

As well as in-camera modification of color through the white balance, you can also modify colors in image editing software. You can shift the hue of an image to give a red sky and blue grass. You selectively modify the hues of certain colors, or swap colors, the possibilities are endless. 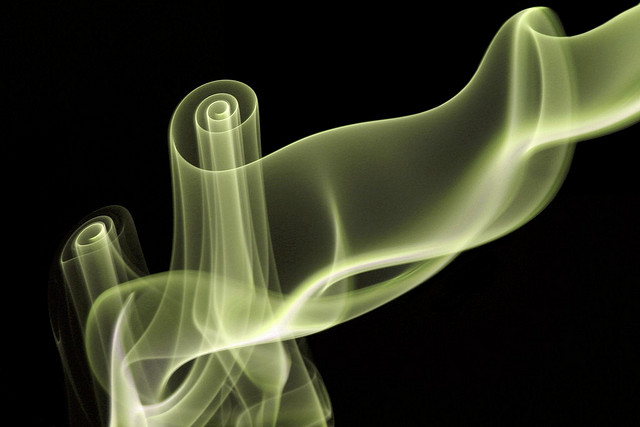 View the world from cramped or dangerous places

I'm including this one as a bonus eleventh point. You can put your camera in cramped locations, such as inside a box. You can take photos from the floor level, or hold it up above your head. You can put it in the path of a herd of stampeding animals and trigger it remotely. 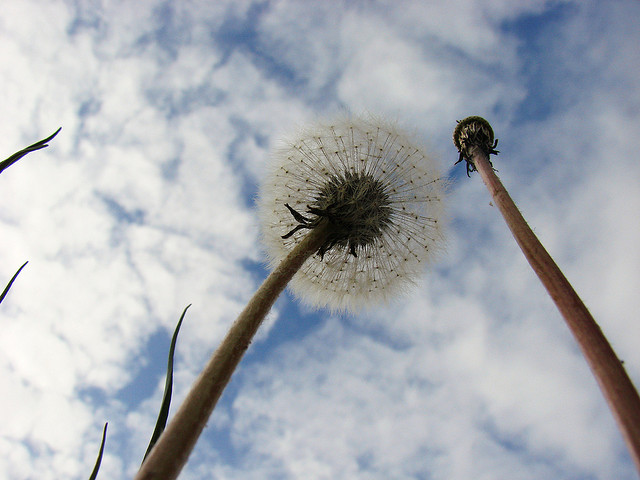 You could technically put yourself in all these positions to get the same view with your eyes, but it would not be easy or safe. The relatively small size of a camera, and modern benefits such as tilting screens and remote control through your phone mean you can easily take photos from positions that you wouldn't normally be able to get into.

So try capturing some things your camera can see but you can't. Because you can't 'see' the image you're trying to capture you may well find it gets you thinking more creatively, and you end up with better pictures.