Improve your Photography by making mistakes

When getting started with learning photography, you'll likely make a lot of mistakes in your photos. Even seasoned pros still make plenty of mistakes - they just don't show off the shots that didn't turn out so well.

We've all taken photos with Lamp posts or trees growing out of people's heads. Or forgotten to reset the camera settings after working in low light and then taken a load of photos in bright light with a high ISO, resulting in unnecessarily grainy images. Or got everything set up for a shot, only to realize you've forgotten the camera's memory card or battery.

In this article we'll look in more detail at how you can use the mistakes you make in your photography to help yourself learn, and reduce the probability that you'll make the same mistakes again. We'll also look at why purposefully making mistakes could expand your creative horizons. 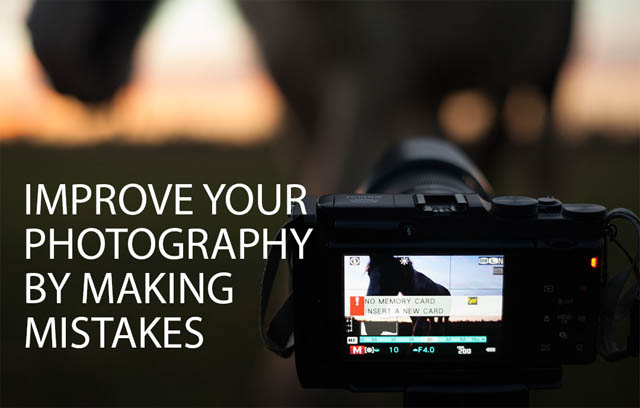 Realize when you're making a mistake

The first step to learning from your mistakes is to actually realize when you make them. If you don't realize that you're making a mistake, then you can't learn from it, and you'll just carry on making the same mistake again, and again.

Often, when you make a mistake, it will be quite obvious what you did wrong (or what would have improved the photo, but you didn't do). 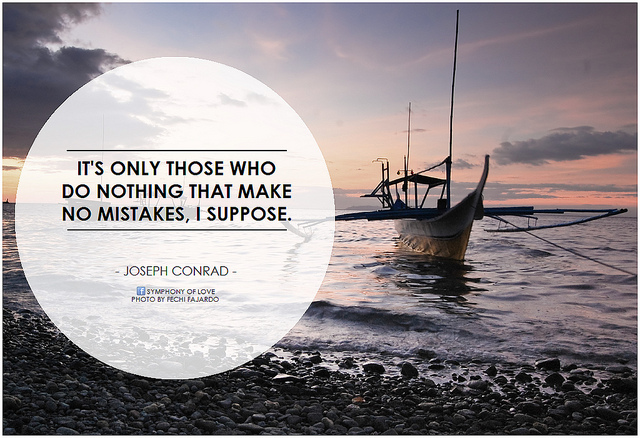 It's only those who do nothing that make no mistakes, I suppose by BK on Flickr (licensed CC-BY)

Increasing your knowledge of photography techniques and guidelines can also help you spot smaller issues. You can do this through reading articles, books, or taking courses.

Just reading a whole book and then afterwards trying to think of whether you make any mistakes covered by the book won't be too helpful. Instead, think about whether your own photos follow the advice given as you read it. And try and practice each technique as it is taught to prove that you really do follow the advice given. It is easy to say to yourself that you follow certain guidelines, but it can be more difficult in practice, particularly if you have previously learnt some bad habits.

The main thing is, just don't be big headed. Don't brush off mistakes you make, always attributing them to something beyond your control. Don't think Oh, it was only a quick snapshot, it doesn't matter that I did X, Y, and Z wrong. You need to be critical with yourself, you need to push yourself to improve.

Analyze your photos for mistakes

Going through your photos and analyzing them to try and spot any mistakes can be a very useful task. Particularly look out for any mistakes you seem to be making on a regular basis. These are the ones you want to focus on correcting first. 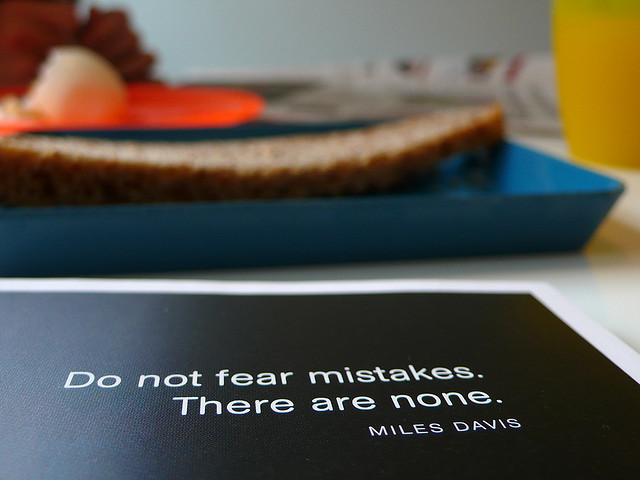 When doing this, you may find mistakes that are not directly your own fault. For example, it could be the camera's autofocus didn't lock on properly, resulting in out of focus images. Or it could be a lot of images are underexposed or overexposed, despite you relying on the camera's auto-exposure. Or maybe you've taken some family portraits but the family all wore different colored clothes that clashed with each other.

While these mistakes might not be directly attributable to yourself, they are still things that you have the power to fix and get right. For example, if there are problems with focus, it could be that you need to learn more about properly setting the camera up for the optimum autofocus performance for the subject you're shooting. Or maybe you just need a better camera / lens. Or maybe you should spend some time learning how to manual focus.

If the pictures aren't exposed properly, maybe you need to learn more about your camera's metering system and choosing the best mode for your subject. Maybe you need to understand when the camera is likely to expose incorrectly, and apply exposure compensation to adjust for this. Maybe you could do with learning how to read the light levels with your eyes and use manual exposure.

If other people are the problem, maybe you need to learn how to better direct them. How to be more specific about what you actually require from them, and what you expect them to wear and do.

When you've gone through the obvious mistakes, try looking at the photos that you're pretty happy with. Are there any minor problems? Is there anything that you could have done better?

Have someone else critique your photos

If you're not quite sure what's wrong with your photos, or what could be improved, it can be helpful to get a second opinion. Often we can see positive things in our photos that others don't, or they can have special meaning to us, which makes us overlook the problems with them. Getting someone else's opinion can help point out these flaws we may be missing. 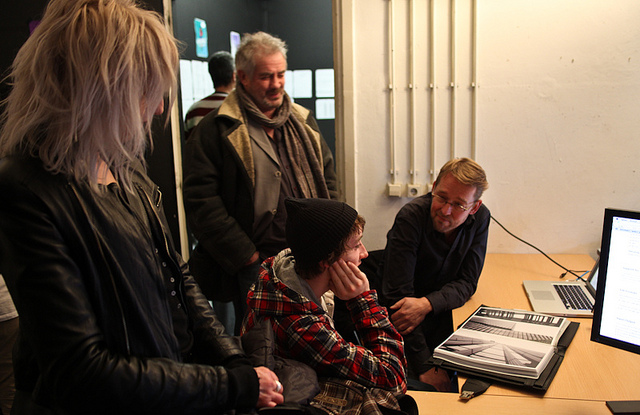 There are lots of ways you can have someone else critique your photos for you. You can submit them to a photography website, and ask for feedback from other members. Most photography forums are suitable for this kind of critique request, and many photo sharing websites can be used for this too.

If you have a local photography club, they may well have critique sessions. This will usually be done on prints rather than digital copies, so you'll likely need to spend a small amount of money on having your images printed. Often professional photographers will be invited along to give the critiques.

Similarly, many photography shows have professional photographers and art directors offering critiques. These are nearly always done on a paying basis. Typically you'll pay a fixed amount for a certain number of image critiques. As with photo clubs, they'll likely prefer prints to digital copies, and you should try and book with a photographer who shoots the same type and style of work you're aiming to produce.

While I certainly wouldn't say that you shouldn't ever fix up problems with your images by editing them, you shouldn't use editing as a crutch. If you always think I'll fix it later in Photoshop, then how will your photography improve? Try and fix it in camera, typically this is much faster than trying to fix a problem later in post too. 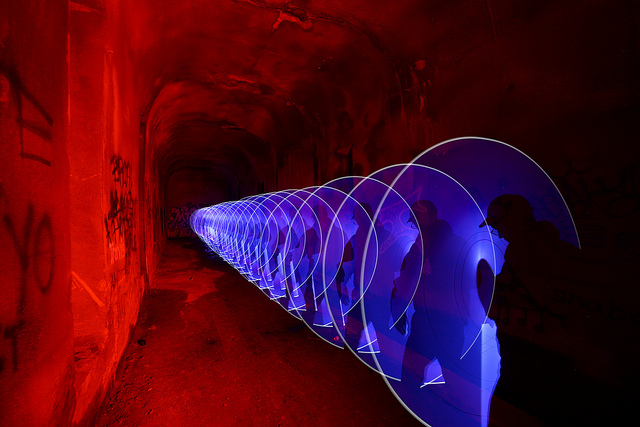 If you are used to fixing a problem when editing, then you're less likely to see it as a problem when shooting. You'll be overlooking something that really needs fixing with your actual photography process.

As I said, using photo editing software is not wrong. In fact it is generally very good practice, to help bring out the best in an image. But it should be used for enhancing what you captured in-camera, not fixing mistakes you made that could easily have been corrected at the time.

A good exercise can be pretending that you are using film (or actually using film) and so only have a limited number of photos you take (e.g. 36). This forces you to be more careful about your photography, ensuring that everything is as good as it gets before you press the shutter. You don't want to waste a precious frame on something that contains a mistake.

One of the great things about digital photography is there is little cost to taking as many photos as you like. This means you can freely experiment, taking lots of photos and making lots of mistakes. But out of some of these 'mistakes' you may actually find something you really like. 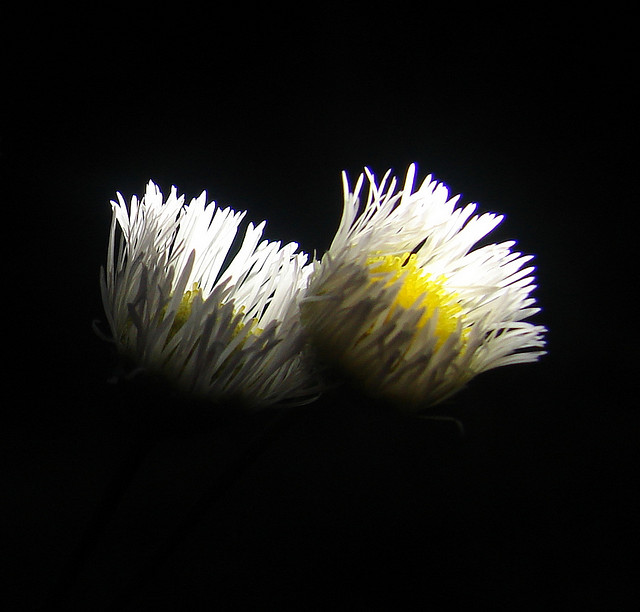 For example, maybe you accidentally really over-expose a photo. The result may be a high key image, and you might decide that actually you really like that style. Then it's just a case of experimenting more, making more mistakes, and honing your technique to be able to capture beautiful high key images. 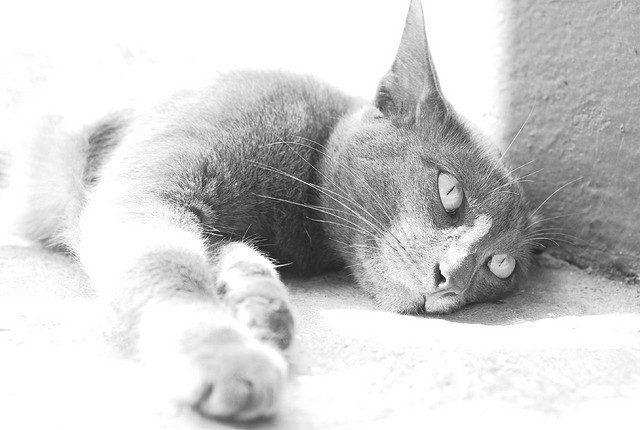 You can experiment with things like using a slow shutter speed and moving the camera during the exposure. Or zooming while taking a photo. Or having something partially blocking the camera's lens. While these could all be considered mistakes, they can all produce some great images too. So experiment and see if you can find some gems amongst the mistakes.

When doing this, try to keep a record of what you did for each shot. This will help you learn, so you can create a similar effect again in future, rather than just having to experiment randomly until you get the same effect.

To sum up, making mistakes is just part of the process of learning. Learning by making mistakes will usually stick in your memory much better than just reading a list of don't do this or do do this. By doing something wrong yourself you get to actually experience the problems it causes, and this will create a stronger memory.