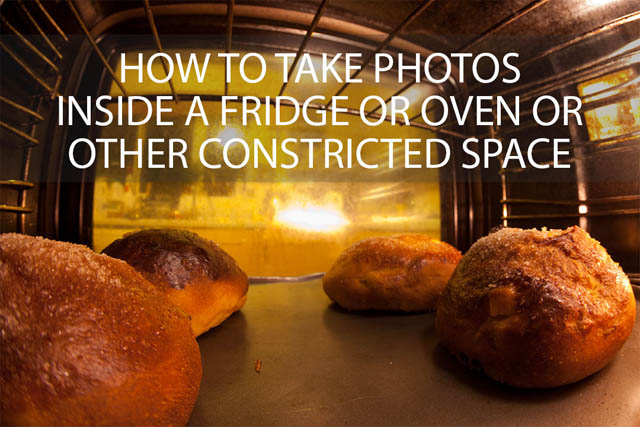 There are lots of subjects that can be used for this type of photo. To give some examples:

Any small space that provides an interesting or unusual perspective will work well really. 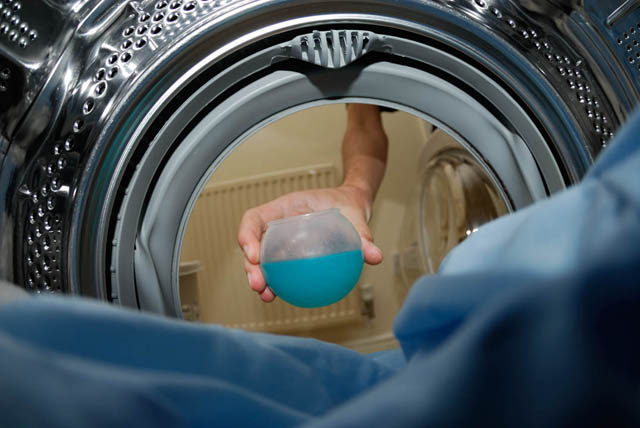 Putting detergent in the washing machine

To make a photo like this, you need a camera with a very wide angle lens. Because the space is so constricted, a lens that is not wide angle will not likely capture enough of the interior space for an interesting photo.

A fisheye lens gives a very large field of view (often around 130° to 180° horizontally), and works very well for this kind of photography. Standard wide angle lenses (e.g. 7-14mm for micro 4/3, 10-20mm for APS-C cameras, and 14mm for full frame cameras) should work reasonably well also.

If you have a compact camera, you can create a cheap fisheye lens by using a door peephole. You can find lots of information on this by just searching the web for "Fisheye peephole". Or see this Flickr group: Peephole fish eye. 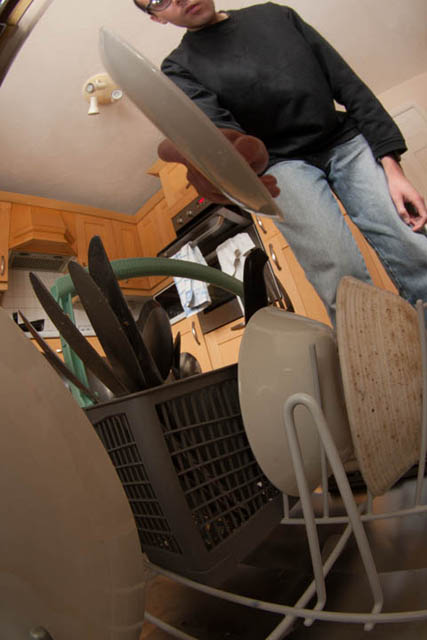 Putting a plate in the dishwasher

Depending on where you are shooting, you will probably need some extra light as well. Most constricted places are quite dark, and if you are shooting from inside a fridge with the door closed, there won't be any light at all. Lighting the scene is mostly a bit of trial and error.

Continuous lighting e.g. an LED torch or small LED light panel will usually necessitate a longish exposure, e.g. over 1 second. If you are using flash as your primary light source, this will allow you to use a short exposure. Flash is better if you want to include yourself in the image (e.g. opening the fridge door) as during a long exposure you are likely to move a little bit resulting in slight blurring.

The features of your camera partly determine how easy it is to shoot inside a constricted space. If your camera has an LCD screen that can be tilted out to the side or above the camera, this is very useful. It allows you to take test shots without having to remove the camera after each shot to check the image on the rear LCD.

Even better is if your camera has Wi-Fi and allows you to control it wirelessly from your phone. Not only can you see how the photo turns out easily, you can also adjust the camera settings without having to even touch the camera. This is very useful if you have placed objects in front of the camera, making it tricky to get to the camera without re-arranging the scene. 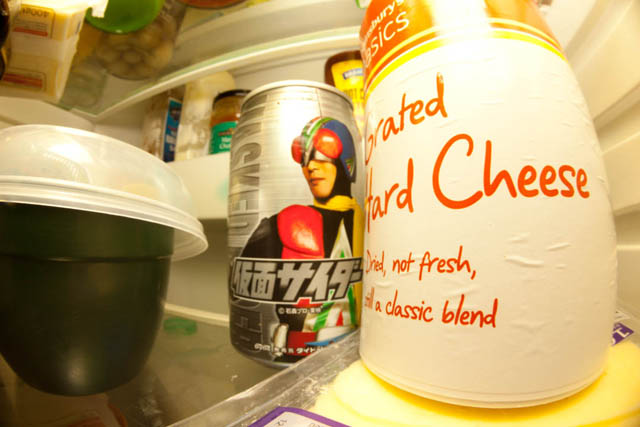 Sadly, my camera doesn't have a tilting LCD or Wi-Fi (though I wish it did). To shoot inside the fridge I used a tablet computer with a USB cable connected to the camera that allowed me to view the images and adjust settings without touching the camera. Then I removed the cable from the image in post-processing. For the other photos I just removed the camera after each shot, checked the image and adjusted settings, then put it back.

Check to see how the image is focused. Generally it is a good idea to switch the camera to manual focus, and then set the focus near the closest focusing distance. You will likely have things very close to the camera, and so you want these things to be in focus. 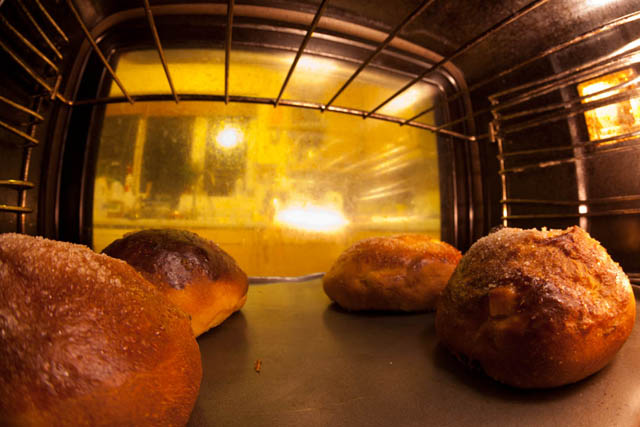 Cooking buns in the oven

Here is a setup photo that shows the how I took the buns cooking in the oven: 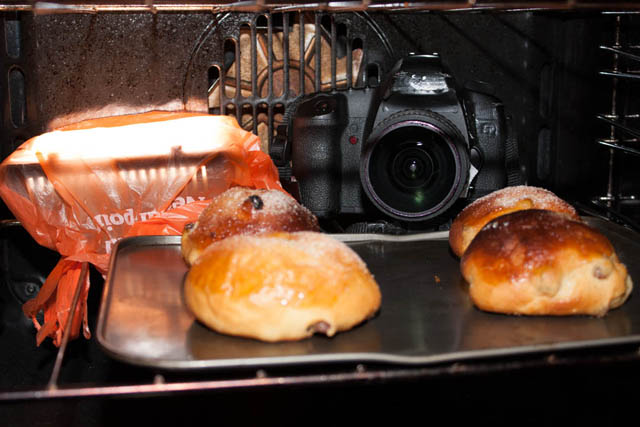 I wanted to use quite a warm color inside the cooker, to give the impression that it was actually switched on and cooking the buns, so I wrapped my light in an orange plastic bag. The light needed to be placed right at the back of the cooker near the camera, as I didn't want the light to appear in the shot.

I used a fisheye lens and focused it to near its minimum focusing distance, then placed the camera right near the back of the oven. I put some already cooked buns on a tray, then put these in the oven. The end of the tray sticks underneath the camera lens a little bit.

The camera was set to self timer drive mode. This meant I could press the shutter button, then have time to close the oven door and move out of the way before the camera took the actual photo.

When the photo had been taken, I had to remove the tray and camera from the oven and then check the photo on the camera's rear LCD. A bit of a do, and it took a few tries to get the final photo, which I am reasonably happy with.

The trick of coloring your light can be a good way to make the image appear as if the device you are taking the photo in is switched on. To light the microwave shot below I used flash, with a warming gel on the flash to give a warmer color temperature. This more accurately represents the color of the light from the bulb in the microwave when it is actually switched on, and so gives the impression that the microwave is switched on. 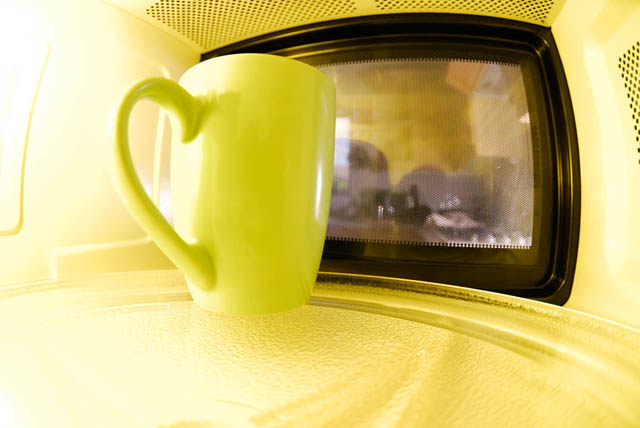 Mug of drink being warmed in the microwave

I certainly would not recommend putting your camera in an oven or microwave when they are actually switched on. A fridge shouldn't cause any problems when on, and a freezer should be okay so long as you don't leave the camera in there for very long.

If you're looking to create the impression that the camera is somewhere wet, such as inside a washing machine or dishwasher when switched on, you can try wetting everything down before you put the camera in place. Maybe get a few suds and place them in the scene. You can even carefully apply a drop or two of water to the front of the camera's lens to make it look like some of the water has splashed on the camera.

So, for some unusual perspectives, try putting your camera in a small area and give constricted space photography a go.

Cheap alternatives to expensive camera filters What is Lens distortion and how to correct it?