Using a tripod for flower photography

Some photographers feel a good tripod is essential for their photography. Others don't use one at all, feeling that a tripod encumbers their freedom. Most of us like having one available so that we can use it for certain shots, but don't like having to carry one around with us. Never the less, a tripod can help us capture images we otherwise wouldn't be able to.

In this article I'll look at the pros and cons of using a tripod from the specific point of view of photographing flowers. I'll also cover the features that you should look for in a tripod if you want to use if for flower photography. 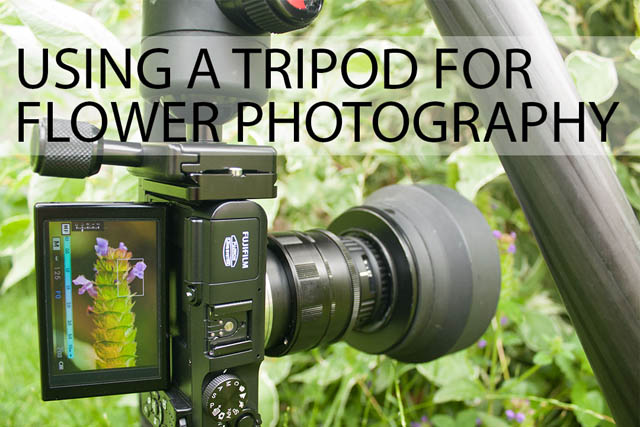 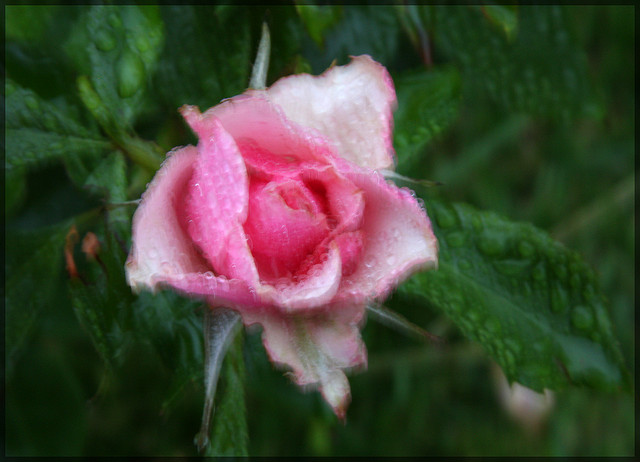 However, in regards to flower photography, it's not quite as simple as saying use a tripod if you want a sharp image when shooting at slow shutter speeds. In many cases the subjects themselves (the flowers) will be moving too. The tripod will only keep your camera steady, and if the flower is blowing about in the wind, it can still end up blurred.

Generally though, low light levels and lack of wind go together. If you're photographing woodland flowers, you will have a lack of light caused by the tree cover. But the trees also block much of the wind, making it easier to get a sharp image by using a slow shutter speed with the camera on a tripod.

Likewise at the end and start of the day the light levels are lower, but the air is also often much calmer at this time of day. If you're shooting cut flowers or potted plants inside it won't be as bright as outside, but it will also be protected by the wind. Meaning a tripod is a good choice for shooting at these times. 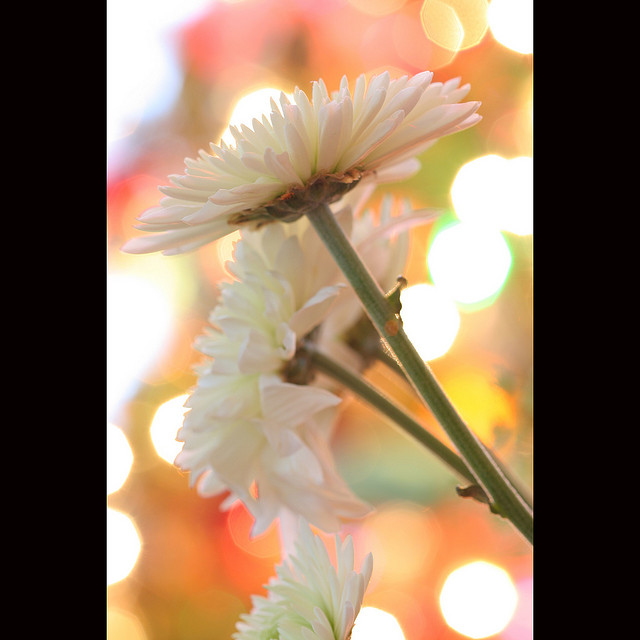 When taking macro (or near macro) photographs of flowers, a tripod can also be useful, though for a different reason. With macro photography you are often working in effectively a low light situation. You may be using a small aperture to maximize your depth of field, which reduces the amount of light that gets through to your camera's sensor.

You'll likely also be working with extension behind your lens, whether that be in the form of extension tubes, or just your lens' internal extension from focusing closely. This extension also reduces the amount of light that gets through. Add a diffuser between the sun and the subject to soften harsh sunlight, and the light level is reduced even more.

But the problem when capturing flowers at macro magnifications is that even when it feels completely still, there can still be micro-breezes blowing your subject about. The flower might only move a fraction of a millimeter, but in a macro photo this can cause significant blurring.

Where the tripod comes in handy here is aiding in composition, focusing, and keeping the camera locked in place while you can position a flash for lighting. 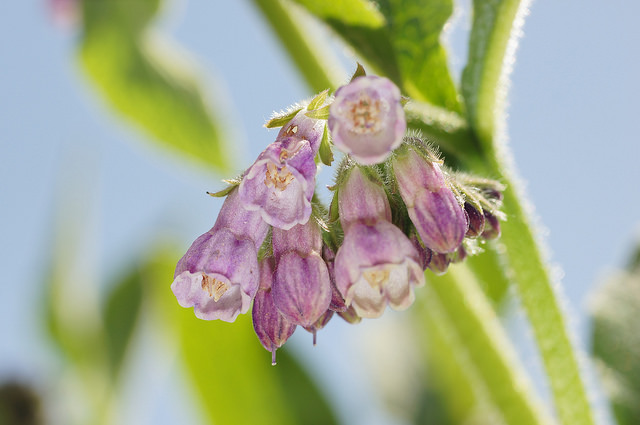 With the camera positioned on a tripod you can think carefully about the exact composition you want. You can look at the frame and move the camera very slightly if there is something just poking in at the edge of the frame. Whereas if you're shooting handheld, particularly when shooting macro, your concentration is more likely to be on getting the flower in sharp focus rather than the composition. A tripod gives you time to consider all elements of the image.

A tripod also makes it easy to retake a photo with the exact same composition if you misfocus on your first shot. Just adjust the focus and try again. 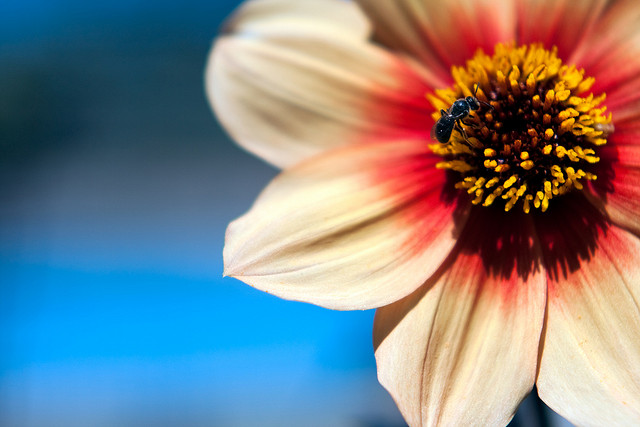 When lighting a flower with flash, again a tripod is very useful. Using a wireless trigger system, you can have your camera locked in place on the tripod, and the flash held in your hand. The short burst of light from the flash allows you to use a fast shutter speed and freeze the subject with no motion blur.

With the camera locked in place you are free to experiment with your lighting. You can hold the flash above the flower, below it, behind it, to the left, or right, or even introduce multiple lights or reflectors. It allows you to get creative with your lighting without having to worry about re-finding the focus and your desired composition for each shot. 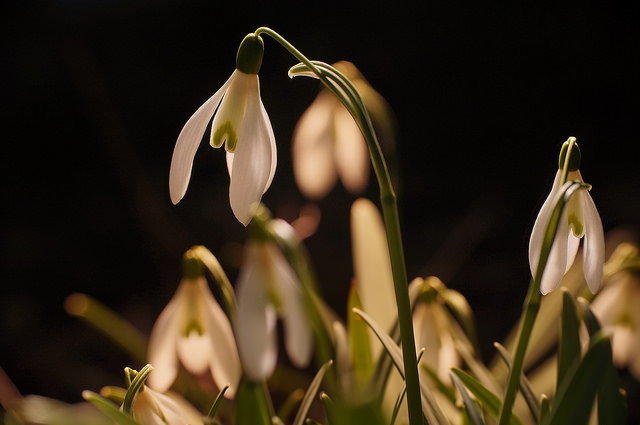 Where a tripod can fall short

I don't suggest you always use a tripod for flower photography though. There are some times that you are better off just shooting hand-held. Non-macro shots during the daytime are often better off taken handheld. You can get a fast shutter speed, so don't need anything to steady the camera, and working handheld allows you to quickly and easily move the camera around the flower(s) to try a large variety of compositions.

Abstract images, particularly macro abstracts, I think also work better handheld. You can easily move your camera around, looking at the compositions as they evolve through the viewfinder (or on the rear screen). It makes it much easier to find a pleasing composition than working on a tripod. 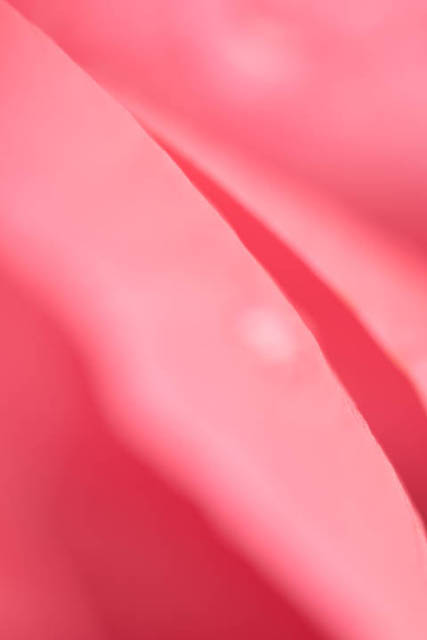 Of course, you might want to try looking for interesting compositions with the camera handheld, then when you find one, start using a tripod. This enables you to make careful adjustments, fine tuning the composition, which can be more difficult to do when the camera is held freely in your hands.

Another problem with tripods can be positioning them. If you're trying to photograph a flower on a bush, for example, the tripod legs may need to go inside the bush to position the camera in the correct place. When working in areas with lots of flowers, positioning the legs so as not to damage any of the other flowers can also be difficult.

Usually it is possible to find some way of positioning the tripod to get the camera where you want it while avoiding these issues. But it can take quite some time to figure out how and where the legs should be positioned.

What to look for in a tripod for flower photography

An essential feature is that the tripod provides some way of getting your camera down to (or near) ground level. Many flowers grow quite close to the ground, and so you need to get your camera down near them. With taller flowers, you will also sometimes want to have your camera pointing up to capture them from below.

Different tripods have different ways of achieving this. Some have a reversible center column, which lets you mount the camera upside down under the tripod. While usable, operating an upside down camera can be a bit inconvenient. 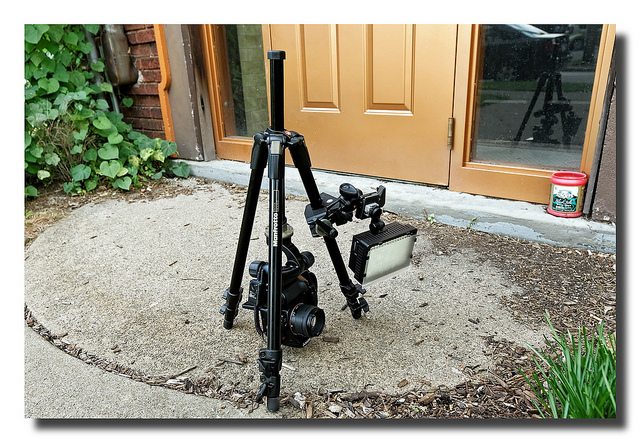 Others have the option of using a very short center column, or even no center column at all, and having legs that can be angled at 90°. So you can splay the legs out to put the camera near ground level. However, it doesn't get you quite down to ground level since you still have the height of the center of the tripod and whatever head you're using on the tripod.

Still others have a center column that can be pulled out of its normal position, and rotated to stick out like a boom arm. Often when this feature is included, the tripod will also feature legs that splay out fully. 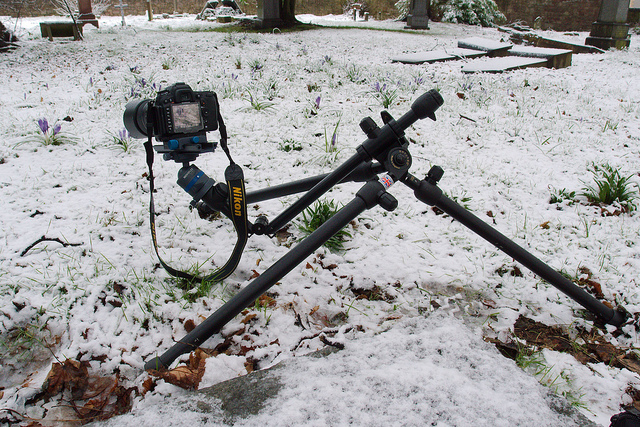 The height a tripod goes to is not particularly important, unless, perhaps, you're trying to photograph tree blossoms. This means that you can go for a smaller, lightweight tripod, which you hopefully won't mind carrying around so much.

Tripods are rated by how much weight they can hold. Generally this is not a big consideration for flower photography, as you are unlikely to be using heavy super telephoto lenses when photographing flowers. However, if you decide to use a geared head and focusing rail (see next section), then this can be more of an issue. Just make sure the tripod is rated to handle the weight you intend on putting on it before you buy it.

In general a ball head is fine for flower photography. It allows you to position your camera quickly and easily, with a reasonable amount of accuracy.

Make sure you get a good head that doesn't move when you lock the position of the head though. If you line up a perfect composition, tighten the head, and then find the camera has shifted a few millimeters down from where it was positioned when the head was loosened, it can be quite annoying. Just read reviews of any heads you are considering to see if this is an issue.

In the same way, a focusing rail can be very useful. This allows careful positioning of the camera closer to or further away from the flower, without having to move the tripod at all. Trying to move the tripod just a little closer or further away from a flower when working at the macro level is extremely difficult. Using a focusing rail is much much easier. 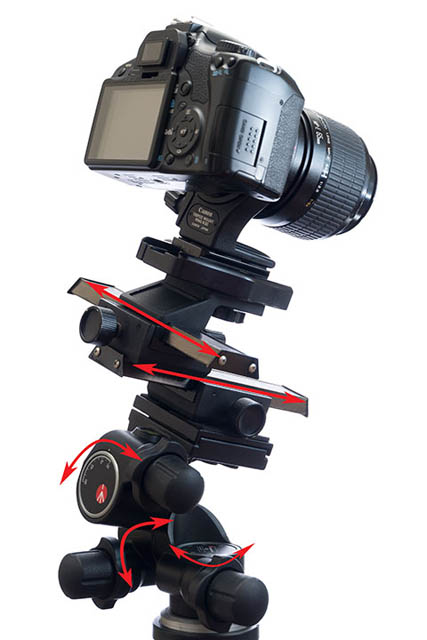 The disadvantage of a geared head and focusing rail setup is the size and the weight. It's not the kind of setup you really want to be lugging around on a hike to photograph mountain wildflowers. I'm sure some people do carry this heavy kit with them on long hikes, but it is not something the majority of us are going to be willing to do.