Tripod Head Types – What are the differences? 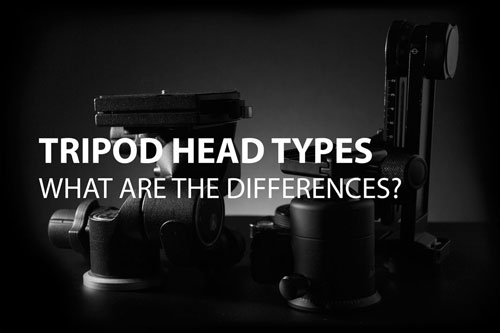 There are a few different types of head available for your tripod, which is what we'll look at in this article. Some tripods come with a built-in head, which cannot be removed. Others come with a head included that can be removed (which allows you to swap for another head if wanted). If you purchase a legs only tripod, then you'll need to purchase a head separately.

It is best to get a head that is over-rated for the weight of equipment that you will use with it. This means the head will manage with the weight of your equipment easily, and you will not be fighting the equipment weight when adjusting the head. 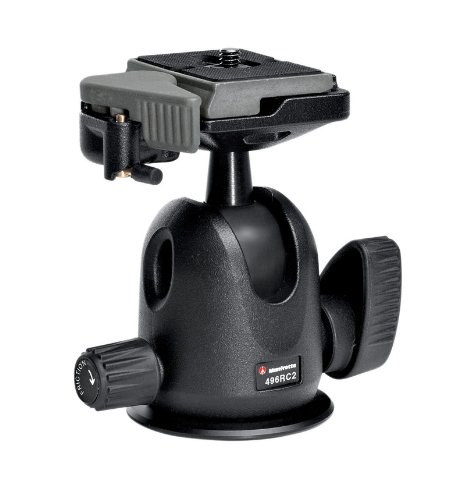 A ball head consists of a ball within a socket. On top of the ball is a raised platform (usually a quick release clamp), which you attach the camera to. The socket part that the ball rests in will have a knob that can be used to tighten or loosen the ball.

So, in use you mount your camera on the head, move the camera on the ball to the framing you want, then tighten the knob to lock the ball in place and prevent it from moving.

Most ball heads designed for use with cameras have a tension knob and a panning knob as well. These are not usually found on small basic ball heads. The tension control lets you adjust how easily the ball will move when loose. The larger the weight of the camera you are using, the higher you will want the tension to be, to allow easy positioning of the camera.

The pan control allows the head to be rotated around its base even when the ball is locked in position. This could be useful if you want to pan the camera for a series of images to stitch into a panoramic photograph.

The ball head is quite a general type of head, and is probably the most popular type of tripod head. The small size and easy adjustability make it very popular for landscape photography.

A three way head has three separate controls – one for panning, one for tilting left to right, and one for tilting up and down. This allows you to carefully position the camera in one axis at a time. 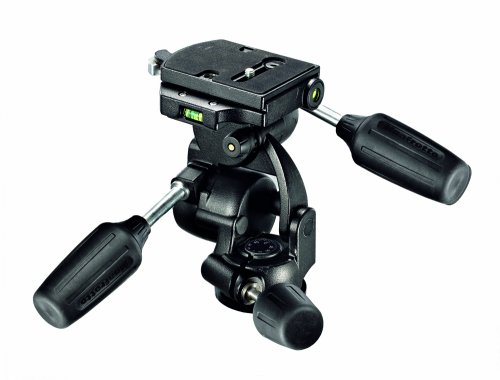 Typically the controls are in the form of levers that stick out from the head. The end of each lever is a control that can be twisted left or right to lock or unlock the control. Then moving the lever moves the head in that direction.

Pan-tilt heads are quite a bit larger than most other heads, especially when the sticking out levers are taken into consideration. They nearly always weigh more than a ball head.

Like the ball head, the the three way head is a bit of a jack of all trades. It's not really specifically suited to any particular type of photography, but will work just fine for most photography. 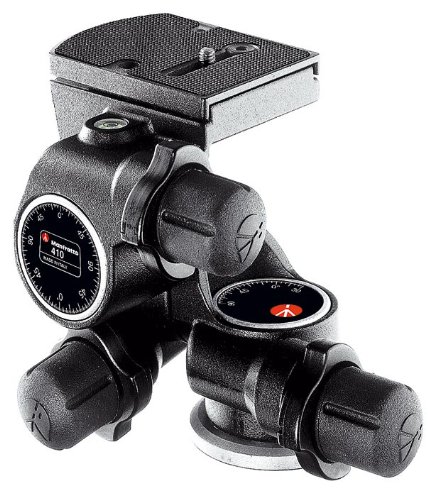 This makes it much easier to adjust the camera's position, since it is easier to turn a knob a small amount than it is to move a lever (with the weight of a camera pushing down on it) a small amount.

As the head's name suggests, the knobs are geared so that a full turn of a knob will make a smaller adjustment to the head's position. Most geared heads also allow unlocking the head in one axis at a time, so larger adjustments can be made quickly by moving the head manually in that axis.

Geared heads typically work best for macro photography, where making small precise adjustments to the camera position is very useful. A geared head would not be much use for any type of photography where you need to pan quickly (such as Sports or Racing photography). While they will work fine for more standard work, the weight and size of the head can be a problem.

Fluid heads give a very smooth panning motion, and are generally used more for cinematography than photography. Most heads have a single lever, which can be used to pan the head left to right and tilt up and down. The lateral tilt of the head is not adjustable, you must adjust the length of the tripod legs instead. 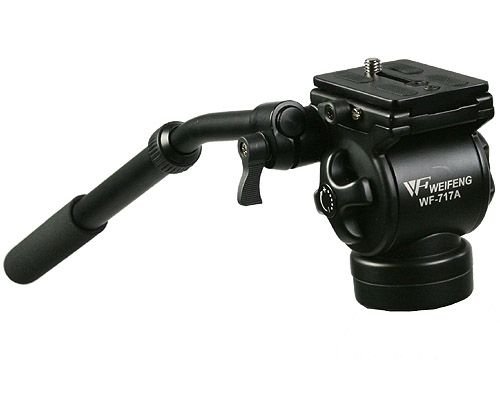 Some Fluid heads do feature an adjustment for lateral tilt, typically via a ball system on the bottom. Note that this is not compatible with all tripods.

Fluid heads will feature a lock or tension control (or both) separately for pan and tilt. This allows you to easily adjust the head so that a heavy camera can be moved slowly and carefully rather than letting the camera's weight swing the head.

The frictionless movement of fluid heads originally came from the use of fluid in the head's construction. Many fluid heads today do not use any actual fluid, but they still have the same fluid movement.

While fluid heads are primarily used for video, they can be used for photography as well. Some wildlife photographers use them with their long lenses for a smooth panning action when tracking moving wildlife (such as birds in flight).

A Gimbal head is a special type of tripod head designed especially for use with large (super telephoto) lenses. Typically Gimbal heads have an L shaped arm that sticks out from the centre of the tripod, with a smaller L shaped arm attached to this that puts the lens / camera back over the center of the tripod. 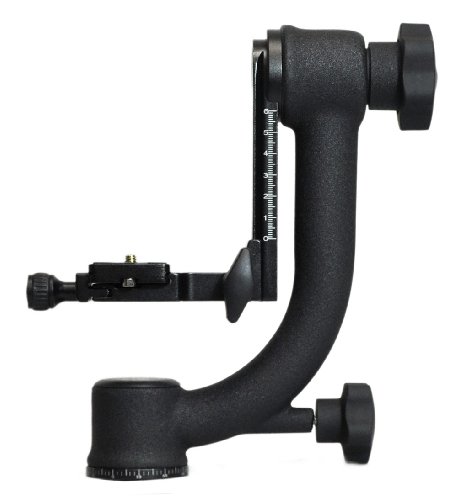 Gimbal heads can move the camera by panning around the base of the head, or by tilting the arm up / down. There is no lateral tilt control, but this is not much of an issue as you will typically be using a lens with a tripod collar with this type of head. You can then rotate the lens in the tripod collar instead of having to tilt it. Alternatively, lateral tilt can be controlled by changing the length of the tripod legs.

The tension of the swing arm and panning base can be controlled through tightening or loosening the relevant knobs. This allows you to adjust the head to the weight of your equipment, and allow it to swing quickly and freely, or stay in place and require more force to move.

Compared to ball heads Gimbal heads are large. But their size compares quite favorably to other tripod heads. When using a large super telephoto lens, size is often not so much of a consideration anyway.

Gimbal heads are typically used for any type of photography where a super telephoto lens is needed, in particular Sports and Wildlife photography.

Another type of specialist tripod head is the panoramic head. These heads are specially designed to allow you to take multiple overlapping photos and then stitch them together into a single image. 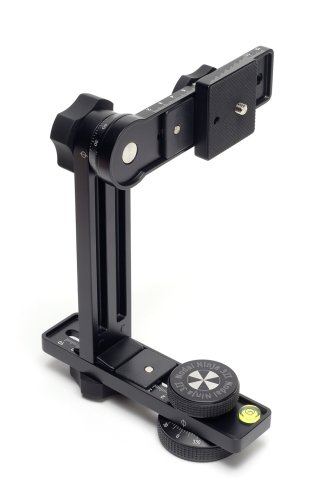 While you can do this with any other type of head, a panoramic head allows you to position the camera over the entrance pupil of the lens. This means that you can capture a panorama without any parallax errors between the different images. (A parallax error is where an object in the distance appears to move relative to an object in the foreground between two overlapping images).

Neither type of panorama head offers lateral tilt control, so it is important to level the head by changing the height of the tripod legs if necessary.

Quite a few of the tripod head types don't have lateral tilt control. This means that the only way of leveling the camera is by adjusting the height of the tripod legs. This can be quite tricky, especially if you are trying to be quite accurate in your leveling. 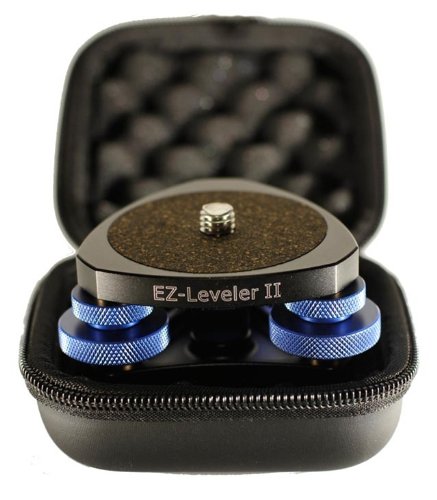 To combat this, you can use a leveling base. This base sits between the tripod and head, and offers a small degree (often around 10-15°) of tilt adjustment. You get the tripod set up so that it is generally level, and can then precisely tweak the leveling using the leveling base.

With all types of tripod head there are a range of manufacturers producing a range of different models with a range of different prices. As far as pricing goes, you generally get what you pay for. More expensive heads tend to be easier to adjust with a camera mounted, easier to make smaller movements of the camera, and have less (or often no) play.

There is also the matter of reliability. Reliability cannot be determined from a product description, so I suggest researching any tripod head you are interested in, and check user reviews. Again, you normally get what you pay for.

Choosing a tripod head (or tripod with a head included) might seem quite tricky given the large selection available. A ball head with the easy 3 way adjustments makes sense for most photographers. A tripod where the head can be changed also makes sense, as you can then add a specialized head later if you need one.

Do you have a favorite type or model of tripod head? Which is it and why?