Different color casts can give different feelings to an image. Oranges, reds, and yellows can give a warm, sunny day feeling. Blues can give a cold feeling. Greens and magentas can give a cross-processed film look.

There are quite a few different ways a split toned effect can be applied to an image. Different methods can be applied at different stages of the image editing process, they differ in how much control they offer, and how quickly they can be applied. In this article we'll look at the main split toning methods so you can decide for yourself which one would work best for your needs.

What makes a successful split-toned image?

Generally split toning works better on photos you'd like to give a film effect, vintage, low contrast, or dreamy look. If you intend your photo to have strong contrast with bright popping colors, then split toning is unlikely to work well. (Of course, there are always exceptions to the rule).

While split toning can be useful for photos where the intended output is low contrast, it works best when applied to images that contain a wide range of tones before processing. If you have a photo that is quite bright with hardly any shadows, then split toning won't be effective. You'll be able to tint the highlights, but if there aren't any shadows to tint then you're effectively just tinting the image a single color, not split toning.

Split toning can be applied to monochrome or color images. With color images you need to bear in mind that the colors you choose for the shadows and highlights will blend with the existing colors in the image. So you need to think carefully about how well that will work. You can, of course, create both a color split tone and monochrome split tone version of an image, then see which one you prefer.

Normally the colors you choose for split toning will be complementary colors, i.e. opposite colors on the color wheel. For example, orange highlights and blue shadows. Or magenta highlights and green shadows. 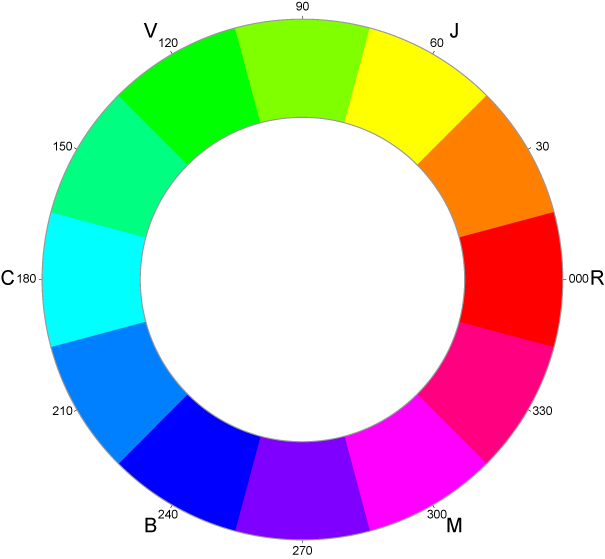 Adobe Camera RAW and Lightroom (also made by Adobe) are the two most popular RAW converters. Both programs use the same RAW conversion engine, and so both offer the same simple way to apply split toning to an image at the point of RAW conversion.

In ACR Split toning is under its own tab, which has an icon of a white bar above a black bar. 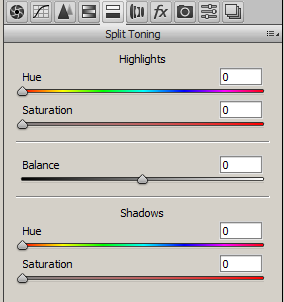 In Lightroom the tab is located between the 'HSL / Color / B & W' and 'Detail' tabs (by default) in the Develop Module. 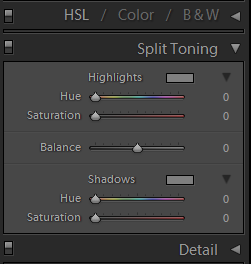 The process of split toning is pretty straight forward. The Hue settings let you choose what color you want the highlights or shadows to be. The Saturation settings affect how strong the color cast is. 0 means no effect at all.

Typically you'll want something around 20-30%, but it depends how strong you want the effect to be. 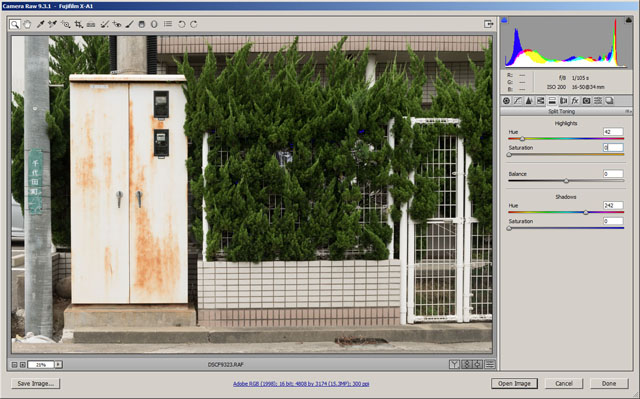 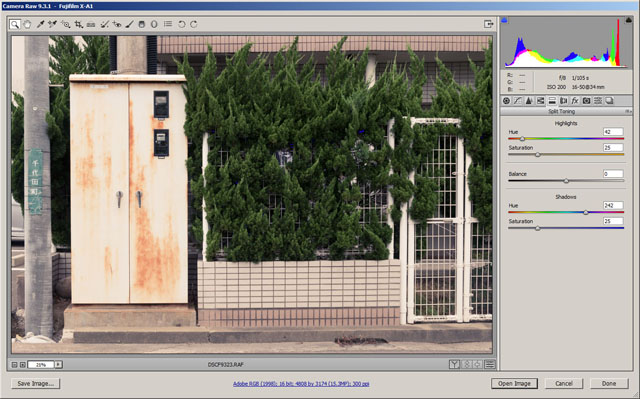 What you can do though is shift the balance of how the tones are considered. So shifting the slider towards the left (darker side), it will consider more of the tones in the image to be shadows, and only the brightest tones to be highlights. 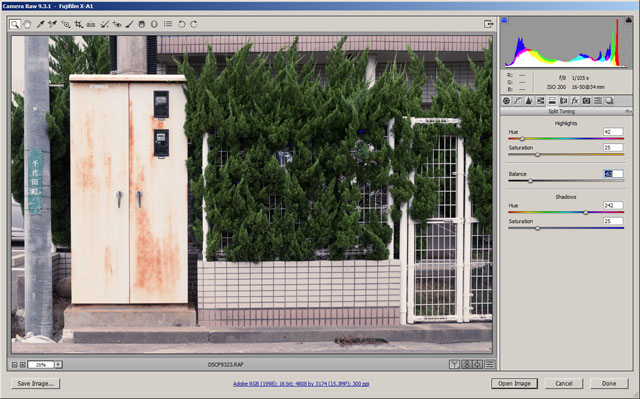 Biasing the tinting to the shadow color 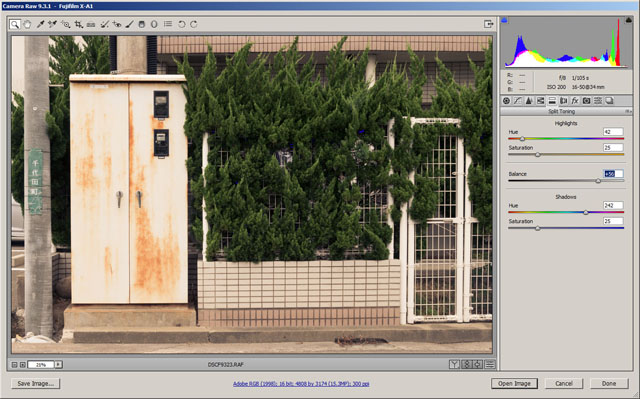 Biasing the tinting to the highlight color 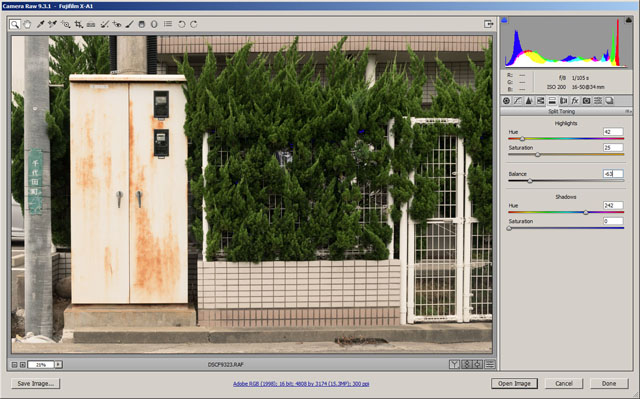 As I mentioned earlier, you can apply split toning to color or black and white images. For a split toned monochrome you can adjust the main saturation setting to -100. Or you can use the B & W (Lightroom) or HSL / Grayscale (ACR) panel to convert the image to monochrome. The split toning effect is applied on top of either. 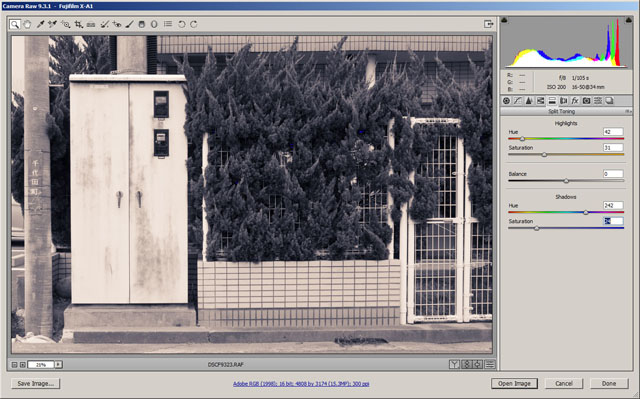 Most image editing software will offer the ability to adjust the curves for each of the Red, Green, and Blue color channels separately. By selecting a color channel, then pulling up the curve for the brighter tones while pulling down the curve for the darker tones (or vice versa) you can easily create a split tone image.

Note that Photoshop Elements does not include Curves adjustments for separate color channels, but this functionality can be added by installing the SmartCurve plugin. I'll be using the Tone Curve setting in ACR for the example images below, but it works the same in all other software. 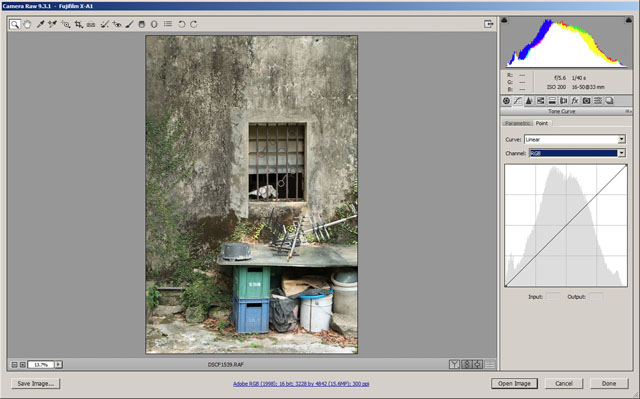 Image before making any adjustments. 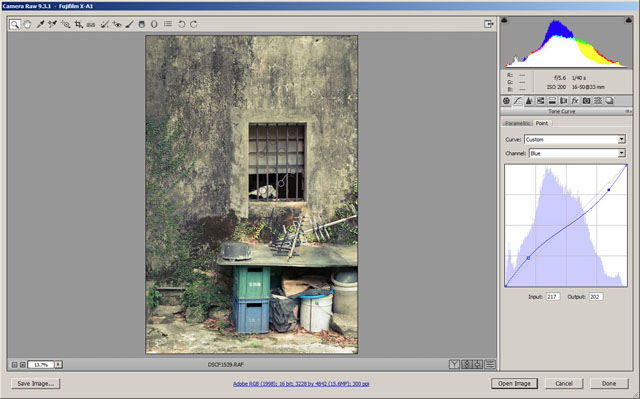 You need to bear in mind how the color channels work:

Just like using the split toning panel in ACR / Lightroom, separate channel curves adjustments can also be applied to a black and white photo. If working on a file that has already been converted to black and white, note that you may first need to convert your image to RGB.

Most black and white images tend to be saved in RGB, which will let you change the curves for each color channel with no problems. However, if an image has been saved in the grayscale color mode, then there are no color channels for you to adjust. If you open a grayscale image and find you can't adjust the RGB curves, then make sure the document is in RGB color. 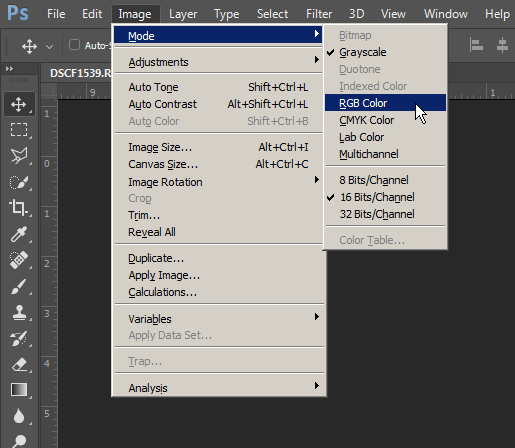 The color balance tool allows you to adjust the three color channels separately for the Midtones, Highlights, and Shadows. In some ways it is similar to using RGB curves, except that you work using sliders rather than manually placing points and pulling them up or down. 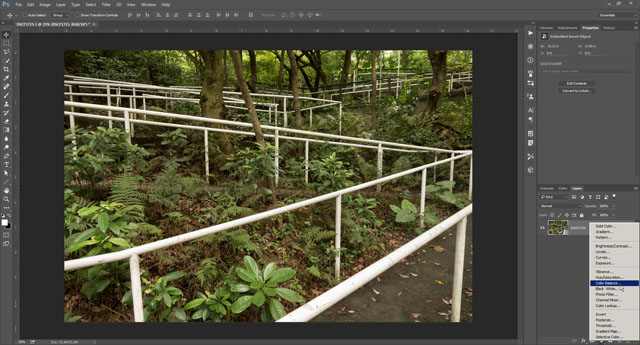 In GIMP the tool can be found under Colors > Color Balance. 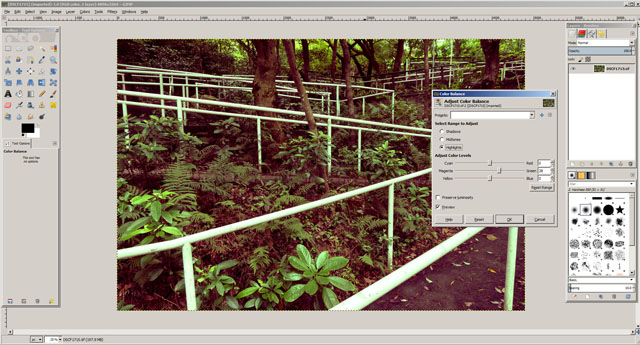 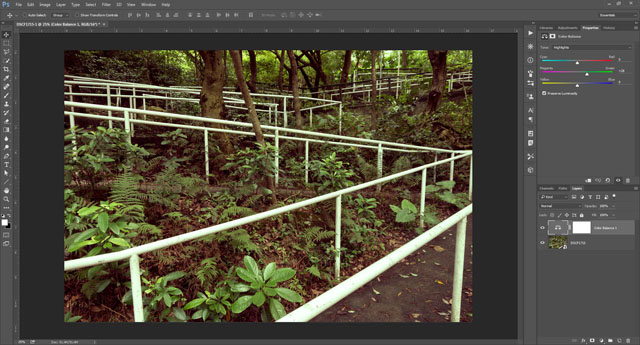 Unfortunately the Color Balance tool is not available in Photoshop Elements, so you'll need to stick to one of the other split toning methods if you use PSE.

In Photoshop (CS / CC / Elements) you can create a Gradient Map adjustment layer. This is a non-destructive method that allows you to change the gradient colors after applying the effect. 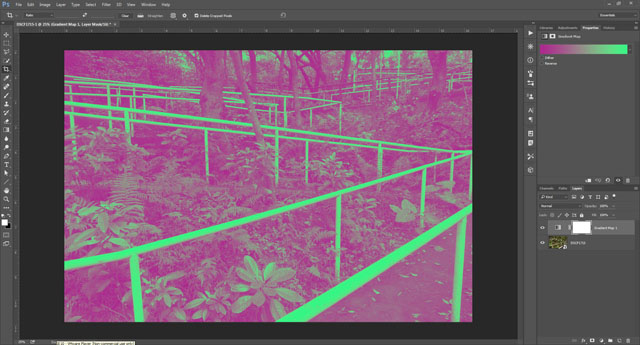 With the adjustment performed, the image doesn't look great. But change the blend mode of the gradient map layer to Overlay and the split tone effect is applied. Don't be afraid to experiment with other blend modes for the layer too.

In GIMP you'll need to duplicate your layer. Set your foreground and background layers to the colors you want to use for the gradient map / split toning. Select your duplicated layer, then go to Colors > Map > Gradient Map. As in Photoshop, change the gradient map layer's blend mode to Overlay. 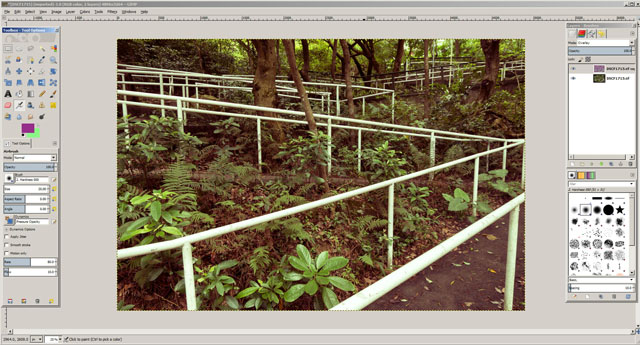 Another way you can split tone an image is to use colored layers overlaid above your image. In your image editing software, open your photo. Above it create a color layer, filled with the color you want to use for the shadows.

The next step is to adjust the shadow color layer so that it applies the color strongly to the darkest tones, weakly to the midtones, and not at all to the highlights. In Photoshop CC this can be done using the 'Blend if' blending options for the layer. However, using a luminosity mask is a much more generic option for achieving this.

In Photoshop CC / CS you will need to hide your color layer, so you can just see the image. Now create a luminosity based selection - Ctrl + Alt + 2 (PC) / Cmd + Opt + 2 (Mac). Make your shadow color layer visible again, and select its layer mask in the layer palette. With black as your background color, hit Ctrl + Backspace (PC) / Cmd + Backspace (Mac) to fill the selection with your background color. 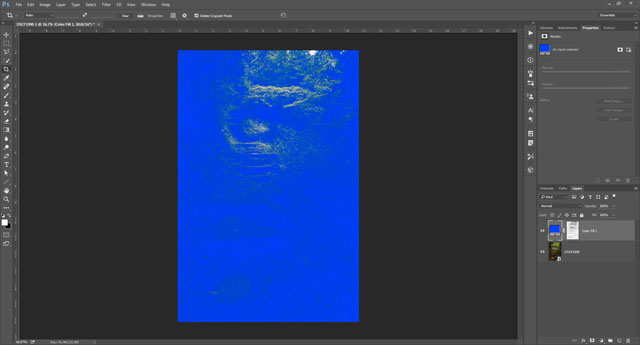 In a layer mask white reveals and black conceals. So by creating a luminosity mask where the brightest tones are black and the darkest white we ensure that the shadow color layer will affect the shadow tones much more strongly than it will the highlight tones.

In GIMP the process of creating a luminosity mask is slightly different. Probably the simplest way to do it is to create the mask before you create your color layer. Duplicate your image layer, then go to Layer > Mask > Add Layer Mask. From the Add Layer Mask dialog choose Grayscale copy of layer and ensure Invert mask is checked. Then click the Add button. 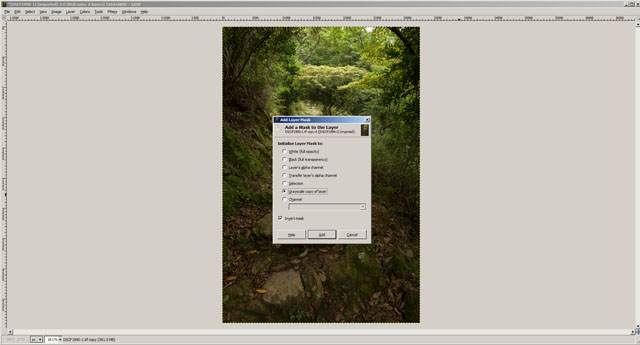 Adding a layer mask based on the inverted image in GIMP

In the layer palette, select the image thumbnail for the layer (rather than the mask, which will be selected by default after adding it). Using the color fill tool, and ensuring that Fill whole selection is checked, fill the layer with your shadow color. 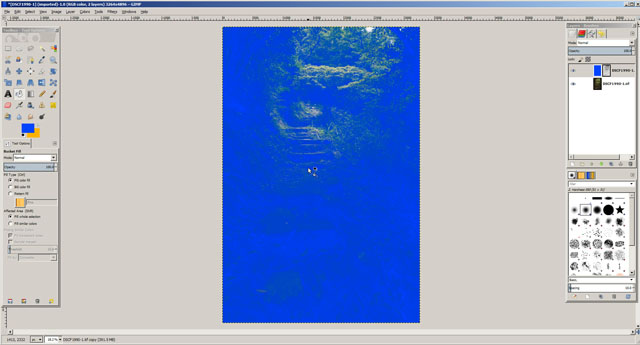 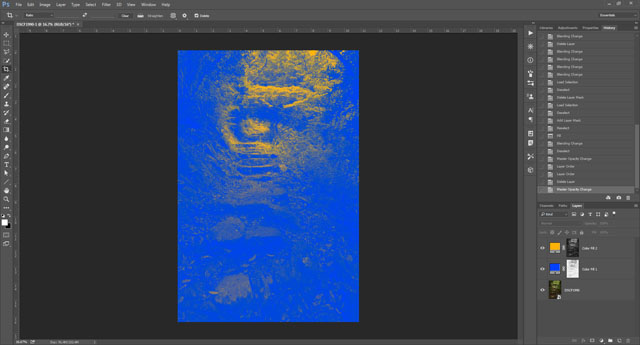 In GIMP you can duplicate the image layer again, add the layer mask using the Grayscale copy of layer option, but ensure Invert mask is not checked. Then fill the layer with your chosen highlight color. 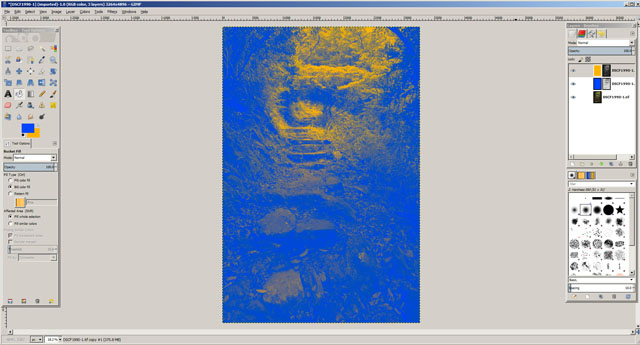 For Photoshop Elements copy the image layer and paste it into your highlight color layer mask. But this time there's no need to invert the mask.

Now just adjust the opacity and blend modes of the layers until you get the split toning effect you want. 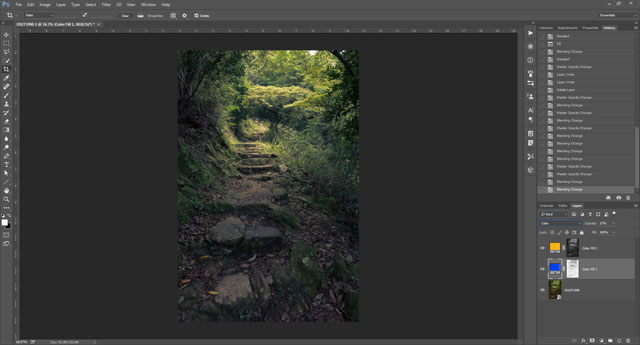 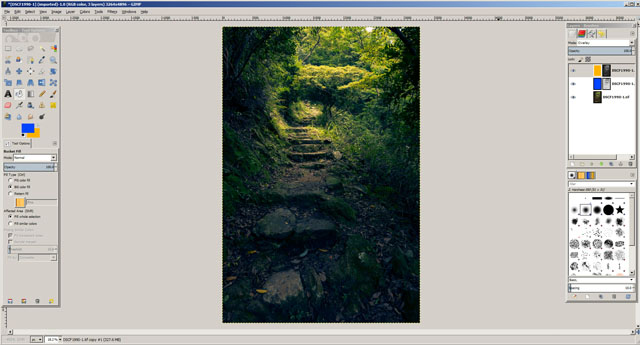 With the techniques described above, even if you're not using GIMP or Photoshop as your editor, hopefully there will be at least one you can easily apply to split tone your images. And don't forget that for many of these methods, when you find a setting you like the result of, you can save it as a preset and then easily apply the same effect to other images in the future.