How to use Exposure Compensation

Although cameras often get the exposure right in automatic shooting modes, sometimes an image can turn out too bright or too dark. By adjusting the exposure compensation and taking another shot, you can get an image that is exposed just how you want it.

Exposure compensation will make the image brighter or darker by adjusting the exposure variable that you are not controlling. (For more about exposure and how aperture, shutter speed, and ISO work together see Photography Basics – Exposure).

If you have auto ISO switched on, then exposure compensation may also adjust the ISO, meaning that it can be used in Manual mode (with auto ISO enabled) as well. This feature only works in some cameras though - check your camera manual.

How to apply Exposure Compensation

Most camera models that feature exposure compensation will have a specific exposure compensation button. It should be marked with a square cut diagonally into two. One half will be black with a white plus symbol, the other half white with a black minus symbol. (See the image at the start of this article for an example).

It is usually a case of holding down this button and then turning a control dial or wheel to choose the amount of exposure compensation that you want.

Normally the amount of compensation will be measured in thirds of a stop. When talking about exposure, a stop is often expressed as EV (Exposure value). A stop and an EV are both the same - a doubling or halving of the exposure. See Photography Basics – Exposure for more information. 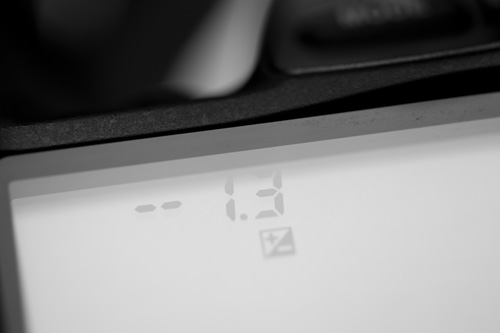 Do bear in mind that this does vary between cameras. Some cameras allow you to set the exposure spacing, so you can choose to have each click on the dial adjust the exposure one stop instead of one third of a stop.

When you set exposure compensation, the camera will indicate the amount set on the exposure scale. This is normally visible in the camera's viewfinder, or with the camera settings on the rear LCD. The exposure meter must be active (e.g. you have half pressed the shutter button) for the scale to show up. 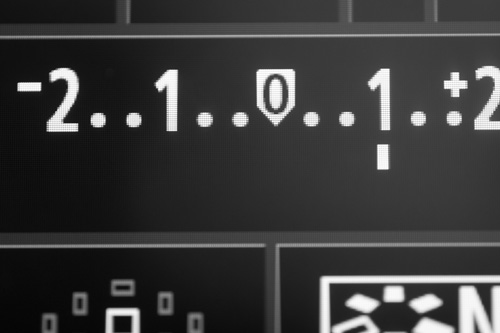 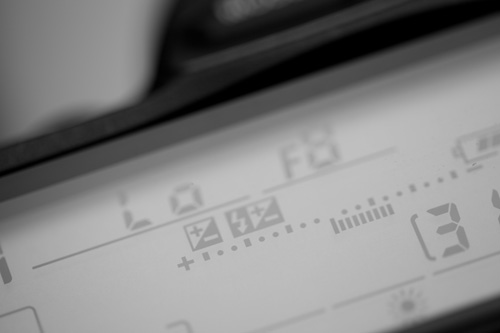 Minus 1.3 stops exposure compensation indicated on the top LCD of a Nikon Camera - note the scale is reversed compared to the other image above, which is of a Canon camera

When and how much exposure compensation to apply?

Knowing which situations will need exposure compensation, and how much will be needed is mostly a matter of trial and error. If you have a camera with an EVF, or you use the rear LCD for composing your photos, and the camera preview is accurate, then whether exposure compensation is needed or not should be obvious. (If the preview is too dark or too bright then it will be needed).

For everyone else, it is a case of taking a photo, and then checking whether the photo is too dark or too bright. If it is, then apply exposure compensation to correct it.

There are a couple of tools that can help in obtaining an optimal exposure. (Note that optimal is not the same as correct - the correct exposure is down to you and your creativity). The first is the histogram. If the histogram shows information bunched up against either edge of the chart, then exposure compensation may be a good idea. You can read more about how to understand the histogram here: Stop Exposure Problems Ruining Your Shot.

The other tool is the highlight warning tool (sometimes referred to by users as 'blinkies'. This is normally found in your camera settings for image review playback. Using this will flash the image wherever there are any blown out pure white areas in your image. So if you see part of your image flashing where you wanted to record detail, then you know to apply some negative exposure compensation to reduce the exposure. 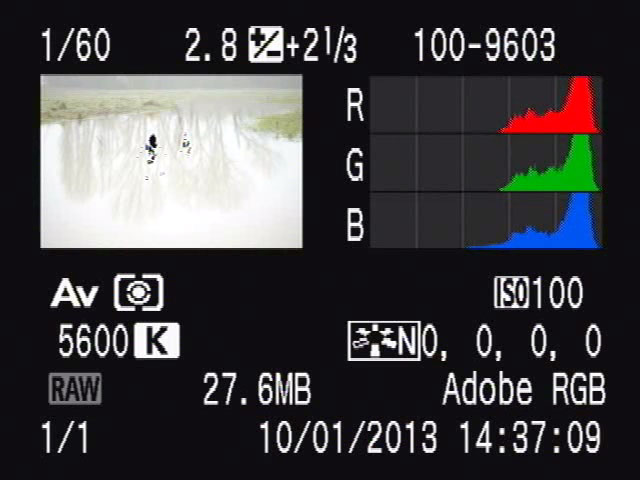 There are some situations where you are more likely to need exposure compensation. These are where you shooting subjects that are very bright or very dark. Very bright subjects could be snow, sand, and sky. Very dark subjects might be a dark rock cliff face, or someone standing in shadows where just a small amount of light is falling on their face.

For example, let's say you are shooting snow in a forest. You take a photo in aperture priority mode, and the snow appears grey. So you add 2EV exposure compensation. This reduces the shutter speed used, so you take another photo and get a brighter photo of nice white snow.

Now you move out of the forest into the sun. A much faster shutter speed is needed here. The camera automatically adjusts the shutter speed to compensate for the increase in light, but it will still expose 2 stops brighter than it would normally, keeping the snow a nice white color.

Exposure compensation is just adding a bias to the camera's automatic meter reading. Manual exposure relies on you setting the correct settings for each individual image.

One last tip is to make sure that you reset your exposure compensation settings after you have finished taking any photos that require it. Otherwise next time you come to use your camera you'll wonder why it's constantly under or over exposing all the photos. (And it's even worse if you don't check the photos and discover the problem until later).

Some cameras automatically forget exposure compensation settings when they are switched off. With others, just make sure that you reset the compensation to 0 after use.

Exposure compensation can be very handy when you want to quickly adjust the exposure settings to create a brighter or darker photo. It can also be very useful if you find yourself in a lighting situation where the camera is constantly under or over exposing. Have a play with it on your camera and see how it works.