This technique works well with static subjects, since they won't move between the two images. The images both need to be aligned, so it probably won't work too well with living models.

So, to start off, here are the two photos I am going to work on. I used a sheet of white card curved up against the wall, and placed the toy on a sheet of white acrylic, which gives a reflection. 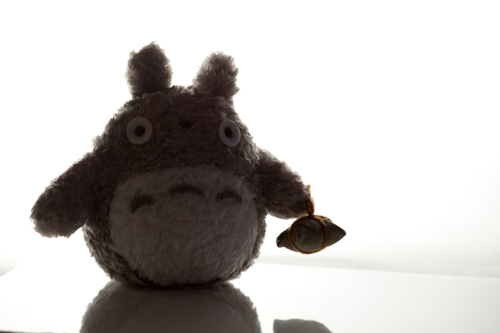 For this photo the light (a speedlight flash) was pointed at the background. The flash power was set high enough so as to blow out the background pure white. (Check the camera histogram and highlight warning). 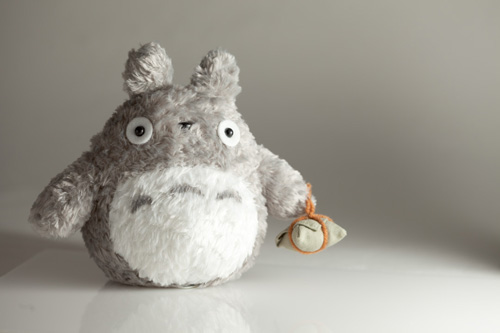 In this photo the light was pointed at a piece of white polystyrene to the right, to bounce the light back at the subject and produce softer lighting than direct light.

Feel free to save the images above and work along with the tutorial. This is the final image we'll be working towards: 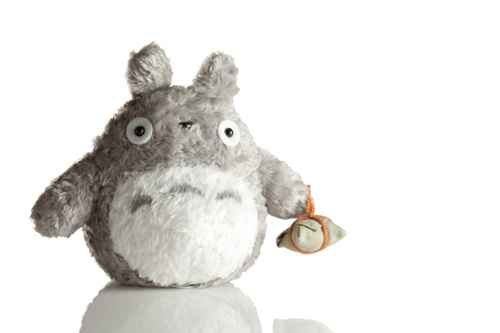 Final image after adjustments in Photoshop

Take both your photos and open them in your image editing software. For this tutorial I'll be using Photoshop Elements. The general process of editing the photo is the same for other software, though command names etc. might be a bit different.

After opening the photos, go to Window > Images > Tile. This lets you see both your photos side by side. In the layers palette, click on the background layer. Hold down the shift key, and drag the layer into the other image. 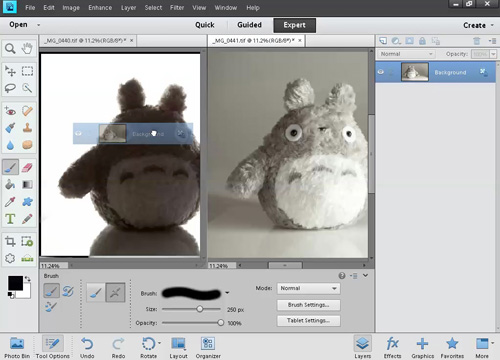 Drop the layer into the image, so you now have an image that contains both photos. You can now close the other photo that the layer was dragged from. 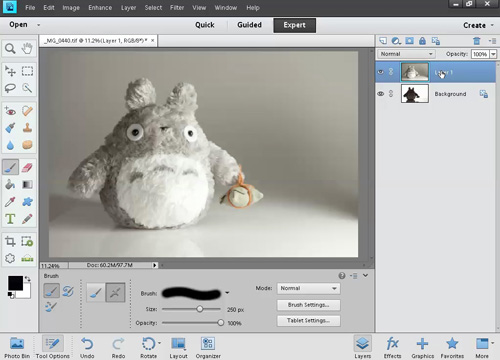 Change the blending mode of the top layer to 'Lighten'. 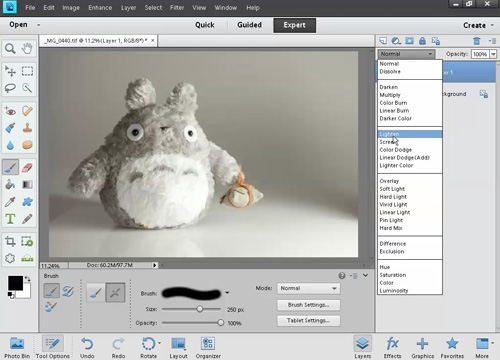 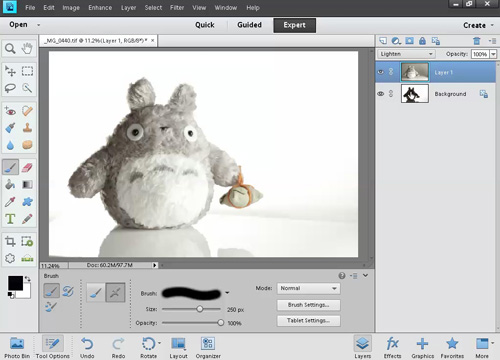 With this particular image, we need to do a little more work to finish it off. The edge of the acrylic the toy is sitting on is visible, and the bottom right corner of the image isn't pure white.

To brighten these areas, we'll use a combination of painting over them with white, and a selective curves or levels adjustment. To paint with white, you can either:

For this tutorial I'll use the second method, but I don't believe one method is better than the other. Add a Solid Color adjustment layer, and choose white as the color. 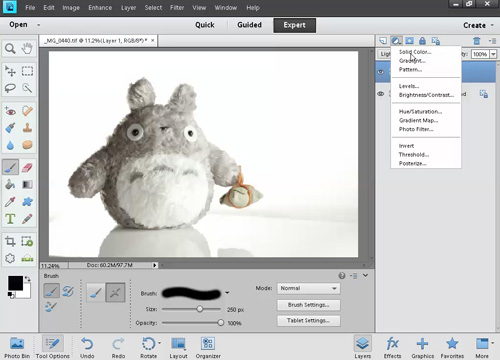 We want to paint in the effect, so fill the layer mask with black. Since black is my background color, I can do this by pressing Ctrl + backspace on the keyboard. Alternatively, you could just press Ctrl + I to invert the mask. 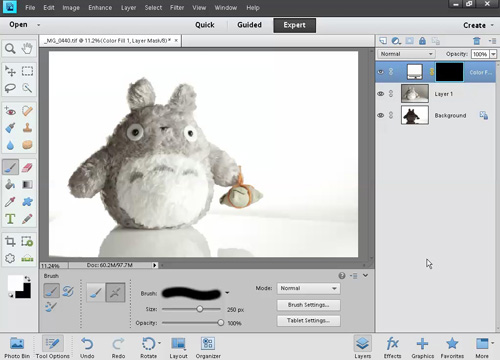 Use a soft white brush, and paint on the layer mask to show the effect of the solid color adjustment layer. (See How to use Photoshop Layer Masks for more information on working with layer masks). After painting over the areas of the image that weren't white, you should have something like below. 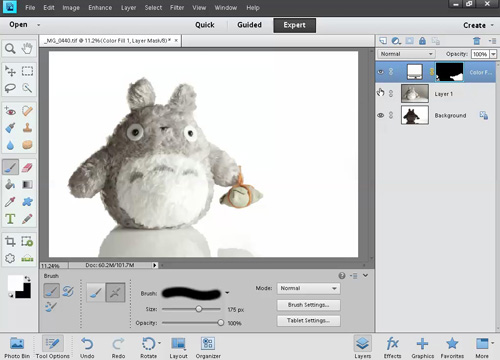 To aid in checking whether whether you have missed any areas that should be white, you can use a threshold adjustment layer. 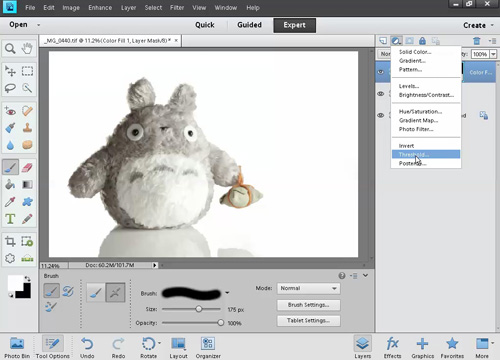 By setting the slider all the way to the right, any areas of the image that are not pure white will appear black. This makes it easy to see the areas that need brightening. 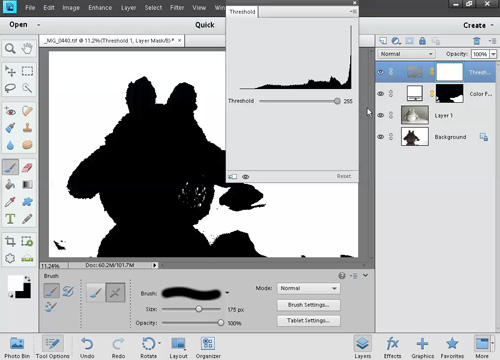 The areas that are not near the toy you can just paint in using the white solid color layer's layer mask. The areas near the toy and its reflection will not be so easy to accurately paint white over. Instead we can use a levels or curves adjustment to bring the white point in over these areas. 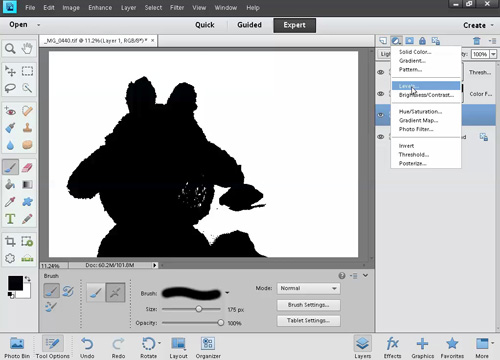 In the levels dialog, bring the white point in until all the areas that you want white in the final image are appearing as white with the threshold layer visible. Don't worry about areas of the toy also becoming blown out white - we will use a layer mask to keep the effect to only where we need it. 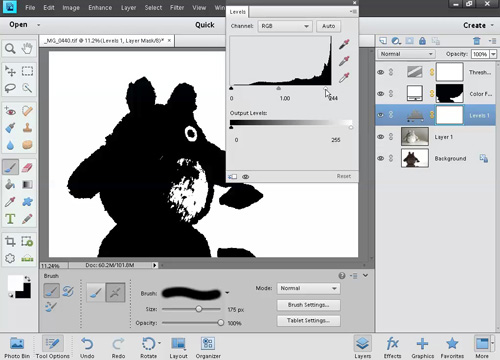 Fill the layer mask of the levels adjustment layer with black to hide the effect of the layer. Then paint in (using white) the effect just over the areas where it is needed. 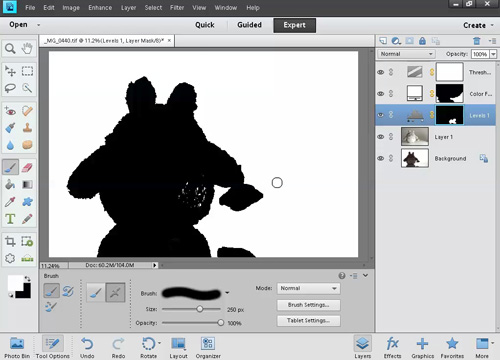 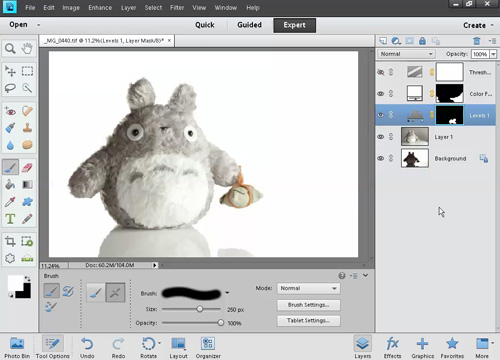