When you take a photo of a landscape, it's not too difficult to get everything from a few feet in front of you all the way to the horizon in focus. But as you get closer to your subject and the magnification level increases, the depth of field (amount of the image in focus) rapidly drops off.

In macro and close-up photography, depth of field is so narrow it is usually measured in millimeters. So taking photos where more than just a thin sliver of the image is in focus can be tricky. 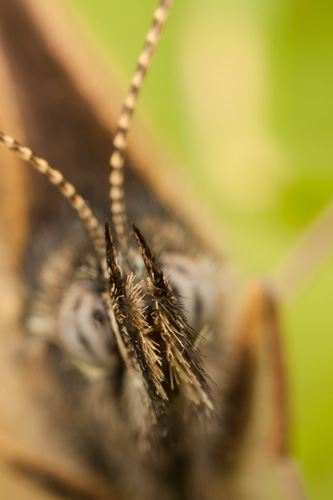 For this reason, much macro photography work is done with relatively small apertures, such as f/8 - f/16. This produces a slightly larger depth of field, so you can at least get a reasonable part of your subject in focus. 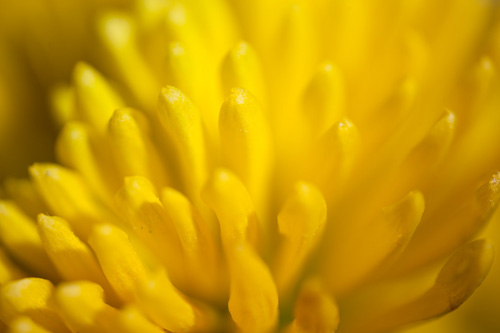 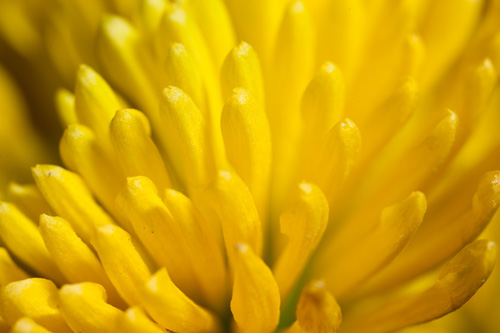 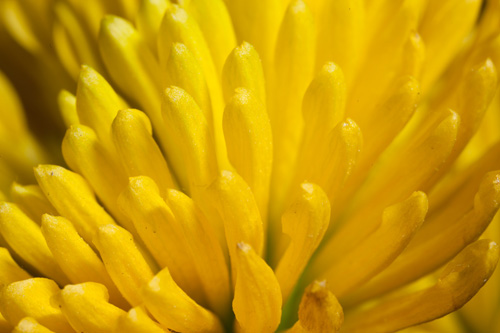 Placement of the plane of focus

Because depth of field is so small, it is important how you place the plane of focus in your image. Remember that this plane is parallel to the image sensor of your camera. So, as well as considering composition when positioning your camera relative to the subject, you also need to consider the positioning to make sure that the plane of focus will go through the most important parts of the subject. 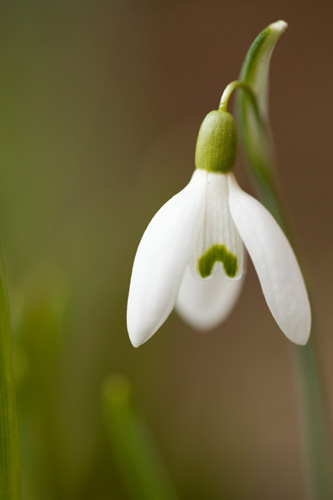 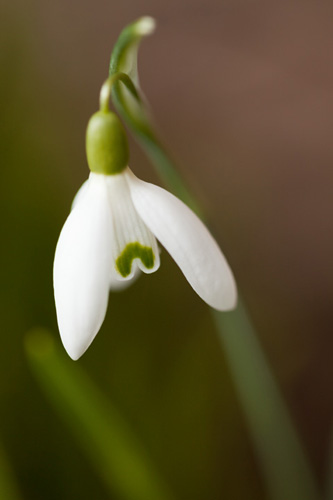 If photographed at an angle, the plane of focus slices through the flower at an angle

In some situations there may just not be enough depth of field to get the main features of the subject all in focus. Or adjusting the camera position to put the plane of focus in an optimal position may compromise the composition of the photo too much. In this case you can consider focus stacking.

Focus stacking is the process of taking a number of photos at slightly different focus points. These can then be merged into a single image that combines the in focus part of each of the images. Resulting in an image with a much larger depth of field than any of the individual images by themselves. 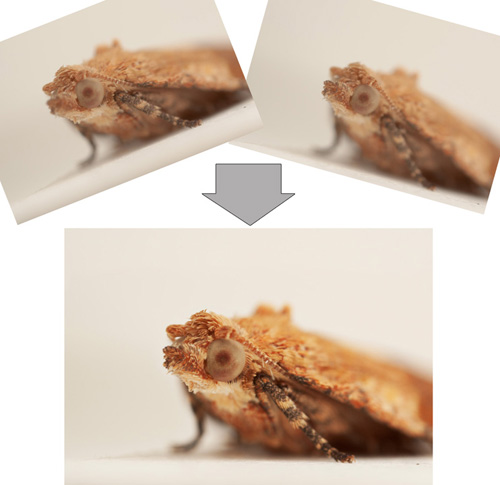 Focus stacking works best in a studio situation where you can precisely control the camera movement and the subject will not move. For outdoors subjects, it will work best during the early morning when there is little wind to blow flower subjects and insect subjects are not moving.

Focus stacking can be used in other situations, but if there is subject movement or camera movement (other than moving the camera backwards or forwards for focusing), then you might have problems combining the stack.

Focus stacking can be done manually by using layer masks in image editing software. Starting with the top layer, just paint out everything that is not in focus (or paint in everything that is in focus), then work your way down through the layers. This is my preferred method when working with a stack of only 2-3 images.

One of the issues of using a small aperture is that any dirt on your camera's image sensor will become visible. This is especially true over areas of an image that are out of focus, which is normally most of the image in a macro photo. 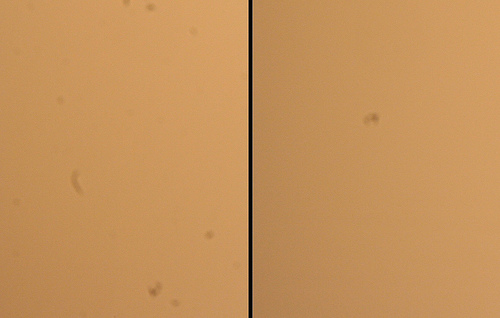 If you have a camera with a built-in lens, then hopefully you won't have this problem - if you do, you'd have to have the camera serviced to clean it. Cameras with interchangeable lenses are likely to suffer from the problem though, as dirt gets into the camera when you change lenses. I covered tips on cleaning your camera's image sensor, reducing the likelihood of dust spots, and removing dust spots from existing photos in a previous article: How to clean your DSLR or MILC’s image sensor to remove dust spots.

When you use a very small aperture, your images can suffer from diffraction softening. This is dependent on the aperture used, the pixel density of your camera's image sensor, and how closely you look at the resulting image. It results in fine detail in the image being softened.

So although we want to use a small aperture to maximize our depth of field, we also want to avoid using too small an aperture so our images don't suffer from diffraction softening. Ultimately it is a fine line to walk, and the decision whether to give up fine detail or depth of field will depend on the image. 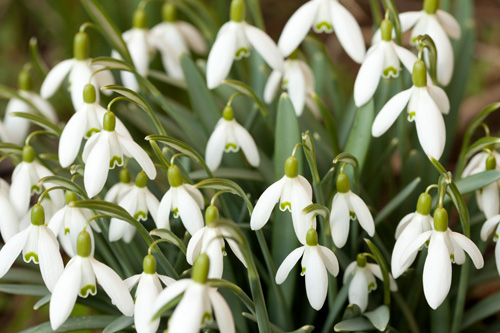 Photo taken at a diffraction limited aperture of f/22 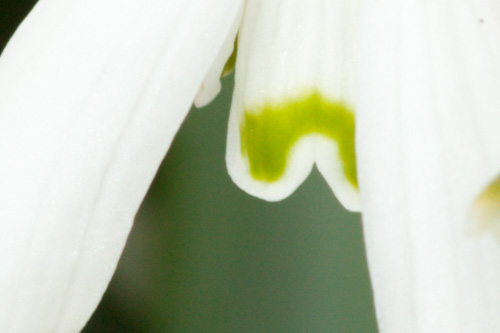 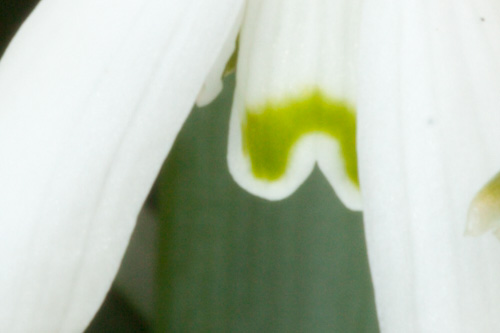 Even when viewed at 100% on screen, it is difficult to see much of a loss of detail from diffraction. If you look at the edges of the flower petals, you can see they are slightly blurred from diffraction softening in the f/22 photo, while they are sharp in the f/8 photo.

For some (most?) images depth of field will be more important than absolute pixel sharpness. For others you may prefer to use a slightly shallower depth of field and retain pixel level sharpness. If you are focus stacking an image, then you may decide to use an aperture that avoids diffraction, and just use smaller steps as part of the stack to negate the reduced depth of field in each image.

The point at which diffraction softening starts to become visible in an image is known as the diffraction limit. A camera that is diffraction limited at f/5.6 means that stopping the aperture down beyond f/5.6 the image will start to get slightly softer.

To calculate the diffraction limit for your camera, there is a diffraction calculator on the Cambridge in Colour website. It's well worth reading the article on diffraction on that page for more of a technical explanation as well.

While often the small depth of field can be a problem in macro photography, sometimes it can be good to embrace it. Shallow depth of field macros where only a small part of the image is in focus can work very well, particularly for flower photos. 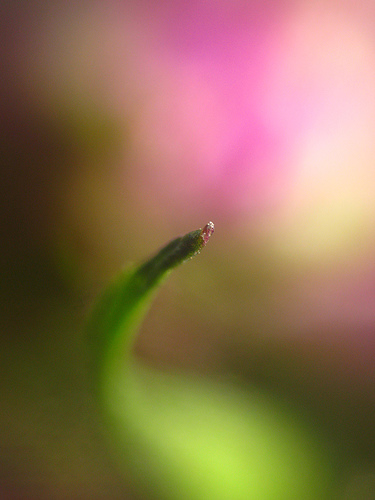