Why use a UV Filter?

Whether you should use a UV filter on your camera's lens or not is probably one of the most often discussed subjects among keen photographers. Some say that they use them all time as it helps protect the lens. Others say that they never use them as they degrade image quality. The truth actually lies somewhere in between these two conflicting points of view. 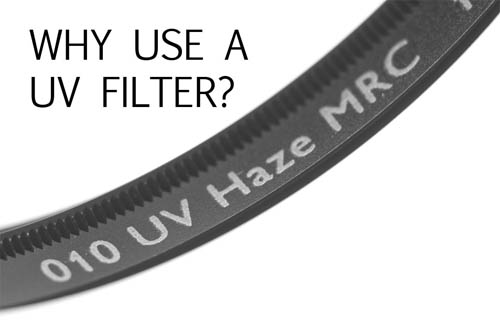 Today UV filters are primarily used as protective filters, to protect the front of the lens against dirt. But this was not their original purpose. Before digital photography was invented, they served a useful purpose on film cameras by blocking ultraviolet light.

Film is comprised of three layers, each sensitive to a different part of the light spectrum - Red, Blue, and Green. However, the blue layer can also be sensitive to ultraviolet light (UV is just below blue in the light spectrum). This could result in an image with a blue color cast. UV light also makes objects in the distance appear more hazy, hence why UV filters are sometimes known as Haze filters.

So to prevent the blue color cast and haze problems, photographers would use a UV filter to block the UV light. Now, even in the film days, UV wasn't a big problem. At low altitudes the amount of UV light that gets through the atmosphere is very low. The sensitivity of film to UV light also varied between films, meaning you might not have any problem with UV depending on the film you shot.

With digital, cameras have built in UV blocking filters on top of their image sensors. So, adding a UV filter onto the end of the lens doesn't make any difference, as the UV is already blocked. Many modern lenses also have coatings that block UV as well.

Another thing to note is that many UV filters don't actually block much UV. Below is a photo of one of my UV filters, the left side was taken with UV light (and a special UV sensitive camera), while the right side was taken with standard visible light. The left side is darker, showing that some of the UV light was blocked, but it is certainly not blocking 100% of the UV light (the filter would appear black in that case). 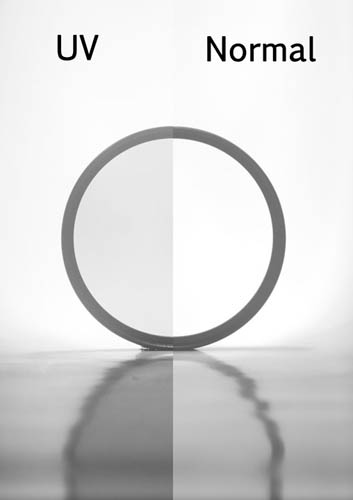 Using a UV filter as a protective filter

So, the UV blocking ability of UV filters is pointless when used on a digital camera. Instead they are used as protective filters, particularly by users of interchangeable lens cameras. A lens can be quite expensive, using a UV filter on the front of the lens protects the front element from dirt, dust, smudges, and any other mess.

If a UV filter gets scratched, either directly by dirt, or accidentally by yourself when cleaning it, it is a lot cheaper to replace than a new lens.

I have heard some people say that a UV filter is easier to clean than a lens. However, this is highly variable, depending on both the lens and filter in question. So while it may be true in some cases, it isn't really a good generalization.

A UV filter can provide some protection against dropping a lens, the filter will hit the ground rather than the front of the lens. Again, it's much cheaper to replace a smashed filter than it is a lens. 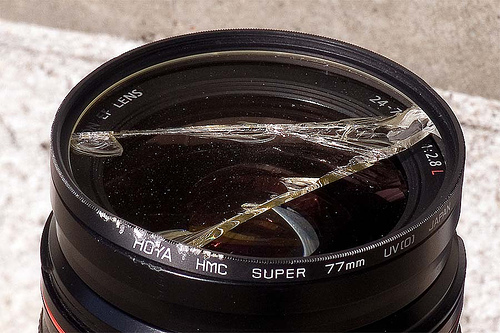 Okay, so why do some photographers never use UV filters? The primary issue is cost. If you are not worried about your lens getting dirty, then buying a UV filter for your lens is just a needless expense. The cost particularly adds up if you own multiple lenses.

A lens hood can often do just a good a job at protecting a lens from dirt. It provides more protection that a UV filter against damage from impact (e.g. if you drop your camera). And it helps prevent lens flare.

Another argument is that adding another layer of glass between the lens and the subject will degrade image quality. While this is true, in most cases any degradation will be so small that it will not be visible.

The quality of UV filters can be quite variable though. With some cheaper filters you may get a visible loss in image quality. Generally it's a case of you get what you pay for.

Which brings us on to another point against UV filters - flare. A UV filter can introduce lens flare that you wouldn't have without the filter. Generally the more expensive UV filters have better (and more) coatings and are less likely to cause flare than cheaper filters. In the example images below you can see the top image has a lower contrast area near the top caused by veiling flare, and a spot of lens flare around the center of the image. 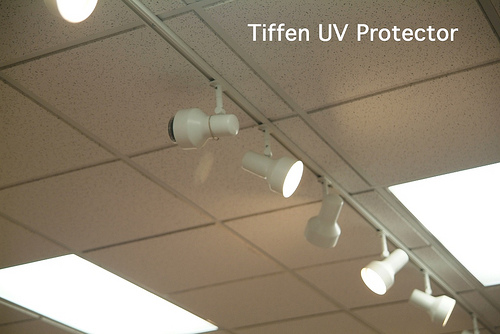 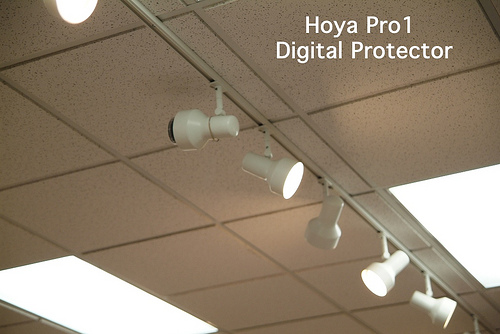 On wide angle lenses, stacking filters can sometimes result in vignetting. So, if you wanted to use a polarizer on your lens that you always keep a UV filter on, you might need to first remove the UV filter before adding the polarizer to avoid any vignetting. This is an extra step that can be avoided by just not using a UV filter in the first place.

Should you use a UV filter or not?

Using a UV filter when you are shooting in dusty areas or where your lens may get dirty makes sense. For example, shooting at the beach a UV filter will protect your lens from sand and sea spray.

But most of the time, a lens hood is a better choice to protect your lens than a UV filter. A hood will provide some degree of protection for your lens, and reduce the probability of lens flare, rather than increasing it like a filter might.