With over a billion photos being shared every day on social media, it can be very difficult to have your photos stand out from the rest. With the vast majority of photos being taken on smartphones, one way you can help your photos vie for attention is by taking advantage of the abilities of a compact system camera or DSLR.

Now, using a CSC / DSLR to take your photos is no substitute for a creative, well composed, and beautifully lit image. Using a 'proper' camera rather than a phone doesn't suddenly give you a better image.

But there are some things a CSC / DSLR camera can do that a phone camera cannot. And by combining your creativity with the abilities of a CSC / DSLR you can achieve a strong image with features that help it stand out from amongst the smartphone images. 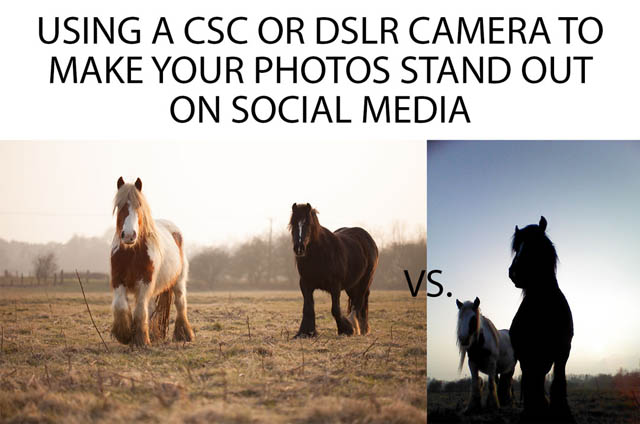 One of the main ways that CSC / DSLR images can stand out from smartphone images is through the use of a shallow depth of field. This is where only part of the image is in focus, and the area behind (and in front) of the subject is blurred. 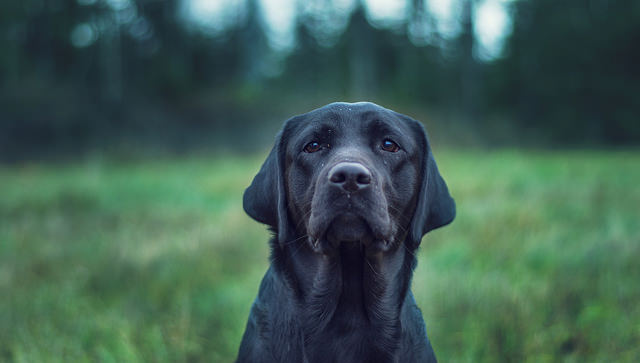 This effect can be emulated on a phone via certain apps, which apply blur over parts of the photo to make them look out of focus. However, this does not give the same look as a photo taken with a shallow depth of field in the first place.

Shallow depth of field can be used to create stronger images by blurring away distracting backgrounds behind a subject. It helps isolate the subject and focus the viewer's attention on what is important. 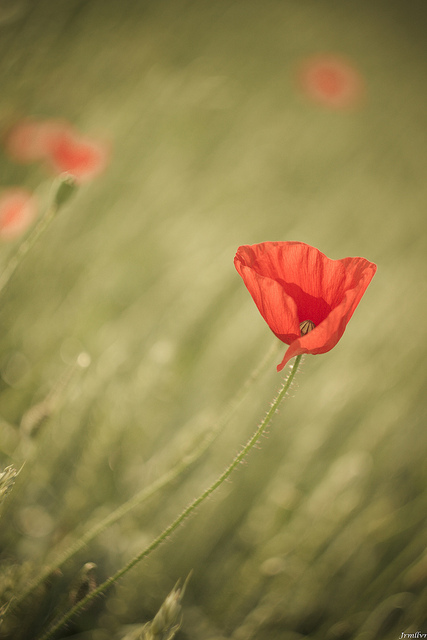 It can also be used to give images a soft and dreamy feeling. This works particularly well when you combine a shallow depth of field with back lighting and low contrast.

The typical smartphone photo taken in low light will be quite blurry, or very grainy, or both. This is again down to the small size of image sensors used in phones. Because they are so small, they cannot gather as much light as a larger sensor, and so give much noisier results when the sensitivity is boosted.

CSC and DSLR cameras, with their larger image sensors, can use much higher sensitivity (ISO) settings before the image becomes overwhelmed by noise. Using a higher sensitivity then allows a faster shutter speed to be used, avoiding blurring when hand holding a camera in low light.

For photos of subjects like evening markets, a DSLR / CSC can give much more usable images than a smartphone. 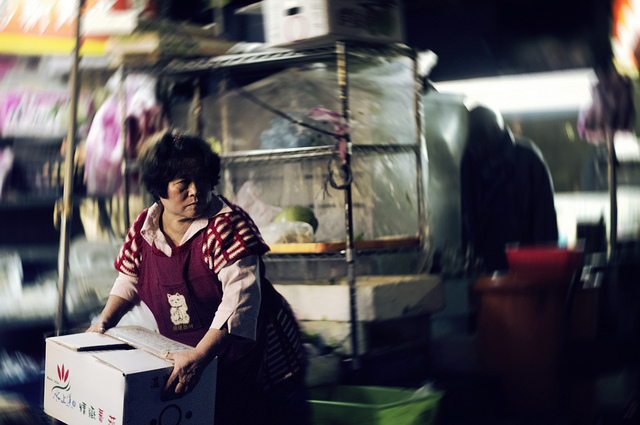 You might think there would be little difference between the performance of a smartphone and a CSC / DSLR when taking photos of people with flash, since the extra light from the flash means that a low sensitivity setting can be used. Outdoors this is generally true - while a camera can be used with off-camera flash to give nice lighting outdoors in low light, a phone can be used with off-camera LED lighting. So it is hard to say a camera has a real advantage over a phone in that situation.

But indoors the situation is quite different. The flash on a camera, especially if you're using a speedlight flash rather than the pop-up flash, can be bounced off a wall or the ceiling. This gives much more pleasant lighting than head-on flash, which can give harsh shadows, bright highlights, and a quick fall-off of light into a black background. 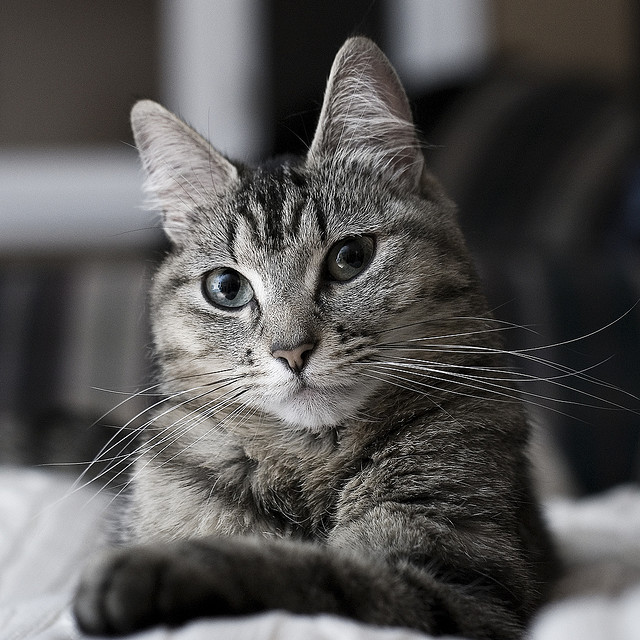 Bouncing the flash of a phone camera would be very tricky, and the flash itself would likely not be powerful enough to bounce anyway.

For some subjects, such as capturing stars in the night sky, you need a relatively slow shutter speed, such as 30 seconds. Most smartphones can get nowhere near this. When combined with the much greater sensitivity to light, this gives CSCs / DSLRs a big advantage when it comes to photographing the stars. 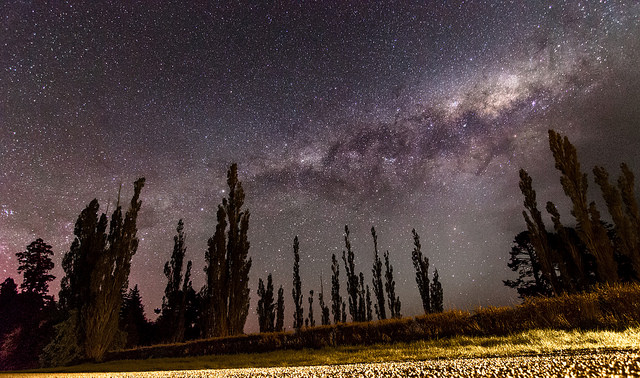 There are some smartphone apps that offer long shutter speeds through the blending of multiple images. This can work for things like a long exposure of moving water, but not for low light subjects like stars.

Smartphones aren't useless for action photography, but they do tend to be quite a bit slower than 'proper' cameras. Typically you need to anticipate the action, and the phone can take some time to focus before the actual photo is taken.

For capturing erratic movement, such as children running around, tracking a moving subject while keeping them in focus, and taking a sequence of shots of a moving subject, a DSLR is much better suited. Most compact system cameras can provide much better results than a smartphone, but only a few CSCs can currently autofocus on moving subjects as well as a DSLR. 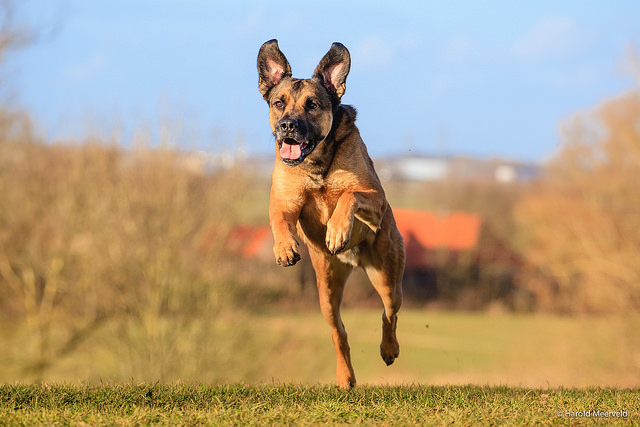 When the autofocus abilities of a CSC / DSLR are combined with a shallow depth of field, this can give excellent images that really stand out from what a smartphone is capable of capturing.

Many phones feature a fixed focal length lens, and zooming is done on a digital basis. This is basically just taking an image and then cropping it. The few phones that do feature an optical zoom don't tend to cover much of a zoom range. 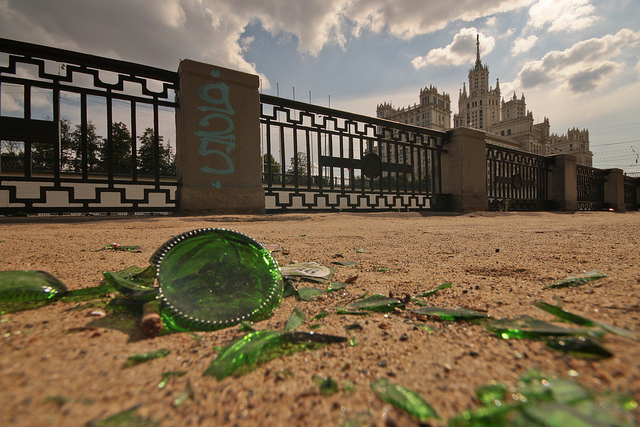 Whereas with a long focal length, you need to stand further back from your subject. The background behind the subject is enlarged. The distance between items in the image can seem very small. This effect is often referred to as telephoto compression, because the elements in the frame seem to be compressed together. 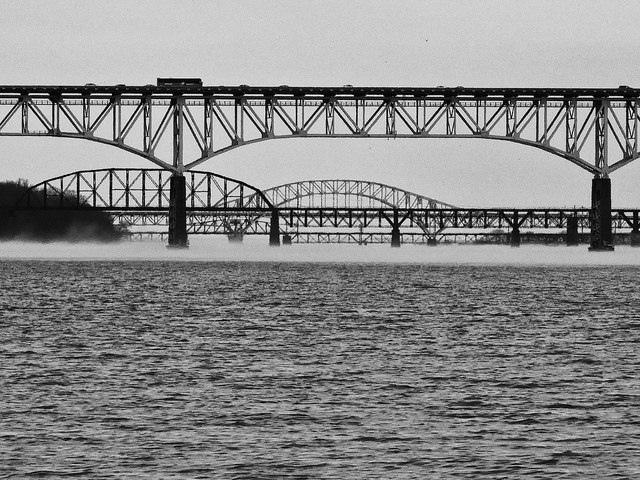 Most phones have a relatively wide angle lens, so achieving a wide-angle perspective is not difficult. However, they can't provide the same level of foreground - background distance exaggeration that a super-wide angle lens for a DSLR / CSC can achieve.

And achieving the telephoto compression effect on a phone camera can be very difficult. Most phone cameras just don't offer a long enough equivalent focal length.

As well as controlling the perspective of an image, the other way in which changing the focal length is useful, is when you can't get any further away or closer to a subject.

For example, if you want to take a photo of a large building but can't back away any further as you have a row of shops behind you. With a smartphone you may be able to shoot a panorama to get the whole building in, though this could have issues if there are people / traffic moving in front of the building. Whereas with a DSLR / CSC you can switch to a super-wide angle lens and get the whole building in the frame with a single shot.

Photographing rooms / enclosed spaces is another area where an ultrawide angle is useful. Using panorama mode on a phone will usually result in parallax stitching / blending errors due to some parts of the image being very close to the camera while others are far away. No such problem if you can get the image in one shot using an ultra-wide lens. 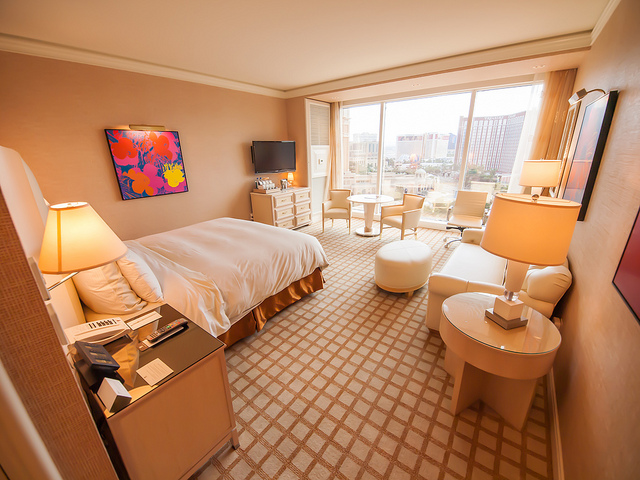 Or maybe you're trying to photograph an animal in a zoo. You can't get any closer because there's a fence in the way. With a DSLR / CSC you can switch to a longer lens to get a better close-up photo of the animal. With a smartphone you can't really do anything to get a closer photo. 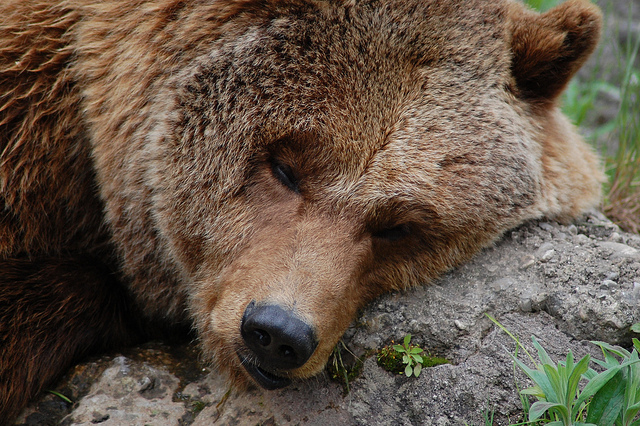 Fisheye adapters for phones are usually of the circular type, leaving black borders at the edge of the frame. And image quality near the edge of the image is often pretty bad, even at typical sizes when viewed on the web / on a phone.

While for CSCs and DSLRs you can use a full frame fisheye lens that gives no black borders, and retains excellent image quality even at the edges. Fisheyes can be great for silly pictures, but are also a favorite for things like Skateboarding photography. 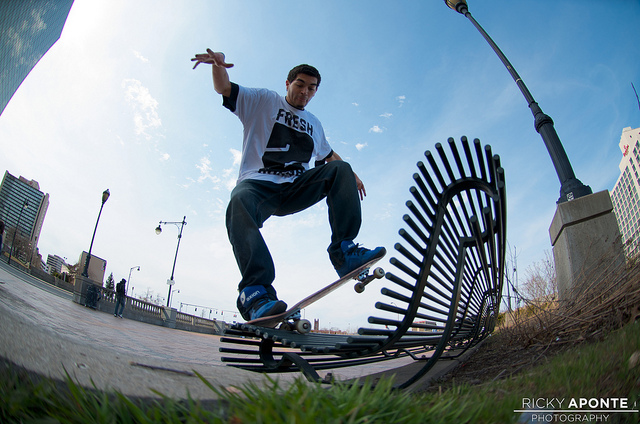 However, the problem with using a phone for macro / close-up photography is that you need to get it very close to your subject. For live subjects, such as butterflies, this means you'll likely scare them off before you can get close enough for a photo. It's not impossible to get close enough for a good photo without scaring them, just more difficult than using a 'proper' camera.

The other problem with having to get the phone so close to the subject is that lighting can become an issue. The phone can block light from hitting the subject, making it difficult to get a well exposed but not blurry image.

With a DSLR / CSC and a macro lens you can position the camera further away from the subject while still getting a good close-up image. Thus, you are much more likely to be able to take a compelling macro / close-up photo (particularly of inverterbrates) with a DSLR / CSC than with a phone camera. 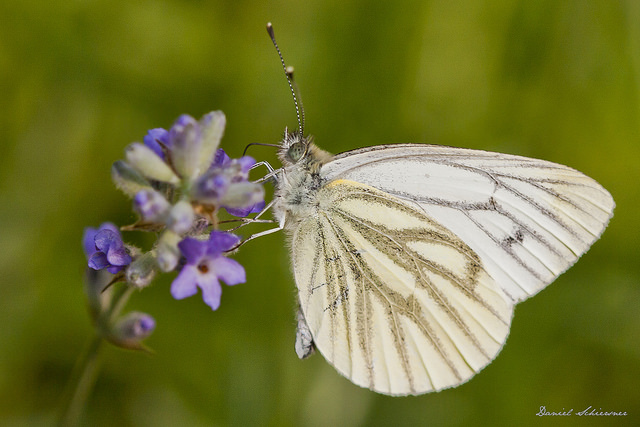 One area in which DSLRs / CSCs fall down is in their connectivity options. With a smartphone you can take a photo then share it on social media straight away (or when you get to a location with free WiFi). 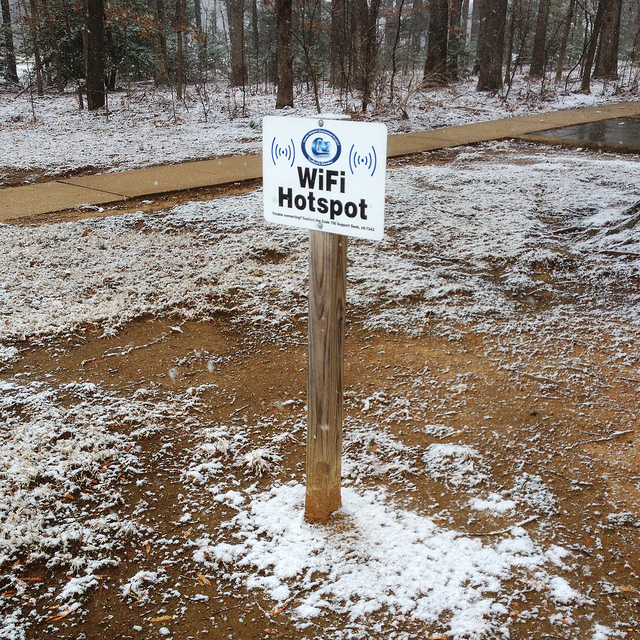 With the majority of DSLRs / CSCs you can't directly upload images to the web or via an app. Instead you still have to rely on your phone, first transferring the photo from the camera to the phone, then sharing it from there. So, not as convenient, but not a big deal either.

Making use of the things DSLRs / CSCs are good at but smartphones are not can help your photos stand out from amongst all the heavily filtered typical phone photos. As I said earlier though, this is not enough in itself, you also need to be producing photos that are interesting and aesthetically pleasing.

There are plenty of articles about different techniques you can utilize for eye catching photos. And just trying out a new technique can give you a burst of creativity. (As can using a 'proper' camera if you're used to taking photos with your phone). But above all, practice is the best way to hone your skills.

Lastly, it's important to mention that getting lots of likes and comments on social media isn't the be-all and end-all of photography. You don't want to be taking photos with a shallow depth of field just because it helps your photos stand out and get lots of likes. You want to be photographing in a style that you enjoy.

So don't go out of your way just to shoot certain subjects or taking photos in a certain style because it's popular. Just shoot what you enjoy, and if you're enjoying yourself and are passionate about what you're photographing, this will carry through in your images.