If you've ever read a review for a lens, you'll probably have noticed how the review will show crops of an image of a test chart, comparing the resolution at the center of the image and the corners. And in most cases the corners are worse than the middle, sometimes considerably so.

For practical purposes, we can say that the corners of such a lens are soft. However, technically speaking the lens may actually have very sharp corners. The softness may be caused by field curvature.

Field curvature refers to when the plane of focus projected by a lens is not flat. This is the case for almost all lenses, though they differ in the amount and style of field curvature. In this article we'll look at it more in depth, and why in some cases it is not necessarily a bad thing. 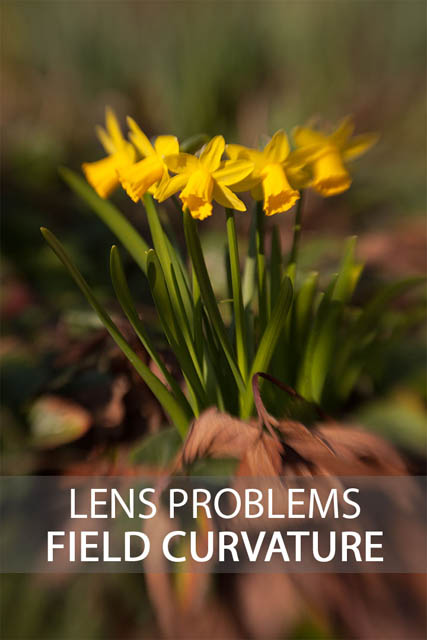 What is field curvature and why is it problematic?

To understand why field curvature can make the corners of an image appear soft, it might help to start with a diagram: 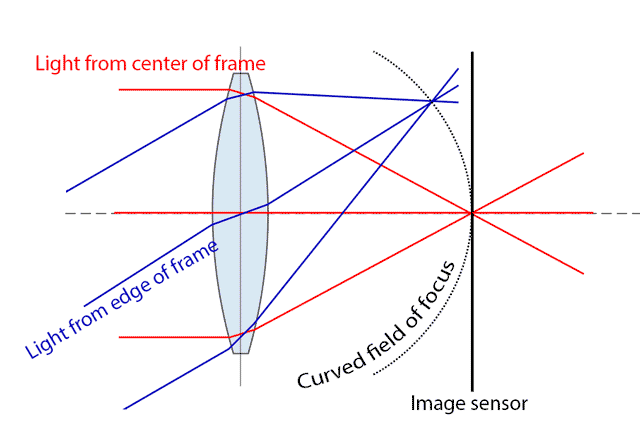 As you can see, the camera's image sensor is flat, and so it requires a flat field of focus to get a flat object in focus right across the frame. If the field is curved, then you cannot get all of the flat plane in focus at the same time.

And it is not only a simple bowl shaped field curvature that lenses can suffer from. Lenses contain multiple elements in an effort to correct for field curvature. But in some cases this results in a lens that is better corrected in some parts of the frame than it is in other parts.

Some lenses have donut shaped field curvature, where the plane of focus curves like a wave. This can cause an image to be sharp in the center, then go slightly out of focus away from the center, before getting sharp again at the edges. 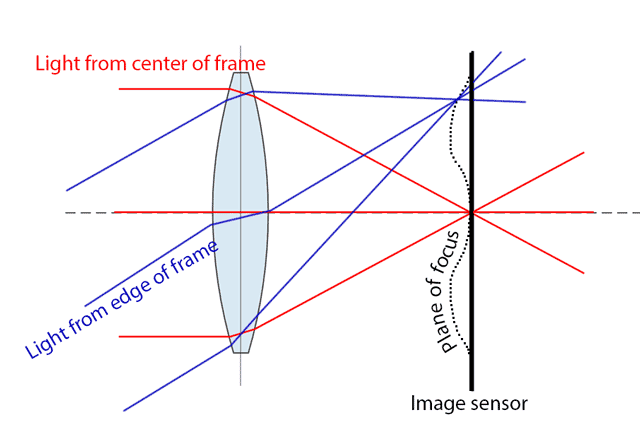 Field curvature can vary with focus distance, and with zoom lenses it may also vary over the zoom range. So you may find that a lens shows field curvature in some situations, while not in others. Whether field curvature is visible or not also depends on the subject you're photographing, and how flat it is.

Although most lenses suffer from some degree of field curvature, the amount is usually not enough to cause any problems when photographing real life subjects. Generally telephoto focal lengths (100mm upwards) are much less likely to show field curvature than normal and wide angle focal length lenses.

Where bad field curvature can be problematic is for subjects where you want the image sharp right across the image. For example, landscapes, astro photography, architectural photography. Bad field curvature make it very difficult to get both the center and edges of the frame in sharp focus.

With most lenses, problems with field curvature can be compensated for by stopping the aperture down. A smaller aperture means a deeper depth of field (more of the image will be in focus), and this can help hide any issues caused by field curvature. 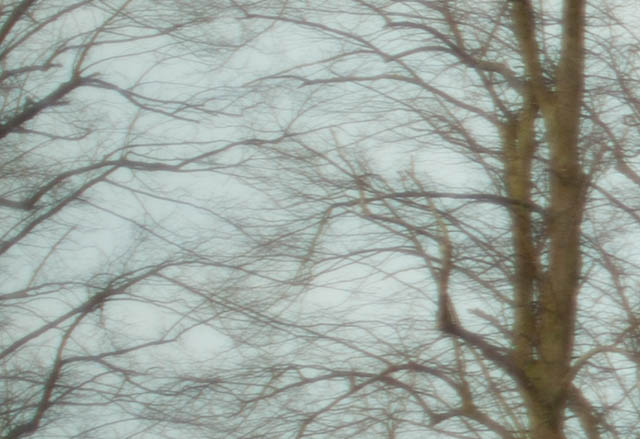 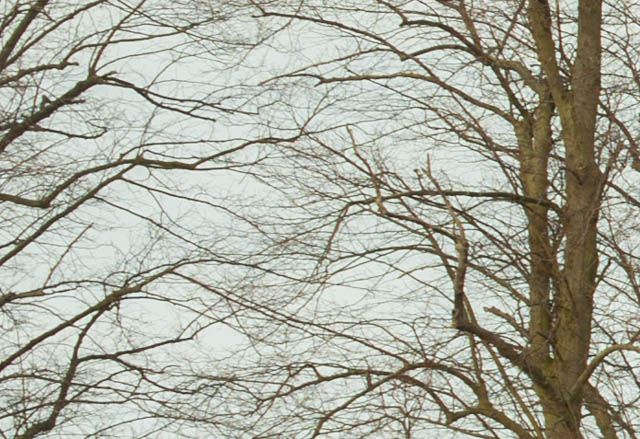 With the lens stopped down, the depth of field becomes large enough that the edge of the image (as well as the center) is in sharp focus. (And stopping down a lens generally improves image quality anyway).

For lenses with particularly bad field curvature, just stopping down the lens may not be enough. Or it could be that you want to use a wide aperture while keeping a flat, parallel subject in focus (I can't think of any examples where that would be the case though).

In this case you could resort to focus stacking. Using a tripod (so the camera does not move), take one photo focused to give a sharp center. Then take another focused to give sharp corners. Finally blend the two images together using image editing software. 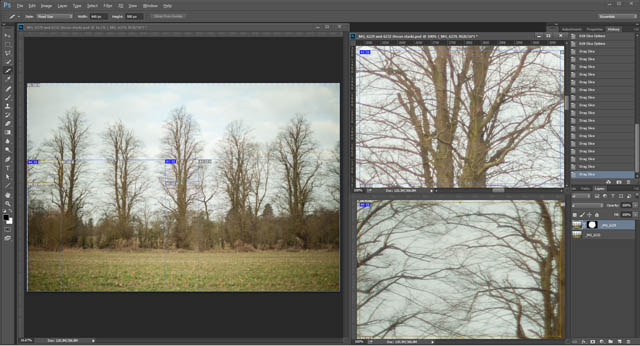 Focus stack of two images taken with lens wide open - one focused for center sharpness, the other focused for edge sharpness. On the right are crops of the center and edge showing both in are in focus (though neither as sharp as when the lens is stopped down).

Focus stacking is obviously not a good general purpose solution for combating bad field curvature though. It won't work for moving subjects, requires the camera be used on a tripod, and takes extra work. Really, if you have a lens with bad field curvature you'll just have to live with it or buy a better lens.

When is field curvature good?

Field curvature is not necessarily always a bad thing. For some subjects, such as portraits, having the edges of the frame quite soft can help draw attention towards the sharper middle of the frame.

While you might not compose your portraits with your subject right in the center of the frame, the vast majority of portraits have the subject's eyes (the important part) nearer the center than the edge.

Some lenses are actually quite popular because of their very strong field curvature. A couple of examples are the Petzval and Lensbaby lenses. Petzval lenses are based on an 1840 lens design, and have recently been re-introduced by Lomography. Typically used for portrait photography, the strong field curvature of the lens gives images quite a unique look. 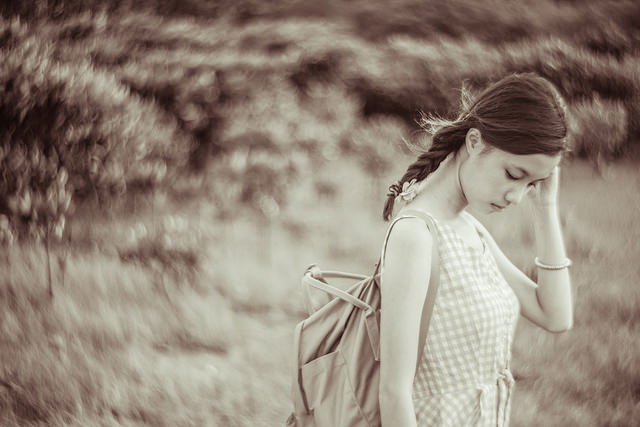 Lensbaby produces a range of different lenses, but their standard lens has a very strong field curvature. When combined with the ability to tilt the optic, this allows the photographer to position the center of the lens (where the image will be sharpest) in an off-center position. 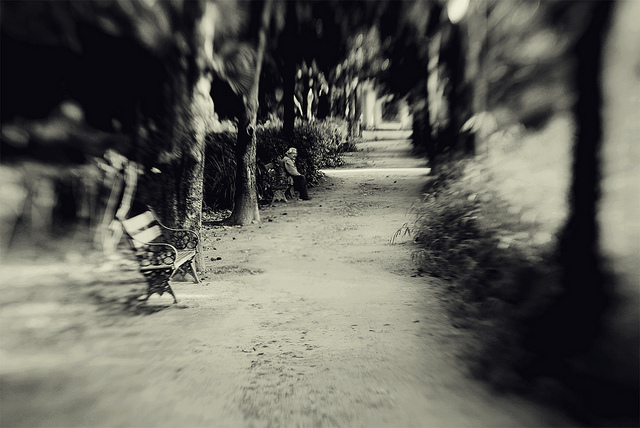 This can give some very dreamy looking images, Lensbabys have been used for filming dream or semi-conscious sequences in various films and TV episodes.

Testing a lens for field curvature

It could be argued that there's not much point testing a lens for field curvature. The lens either gives you results you want or it doesn't. However, if you do want to test your lens for some reason, the process is pretty simple.

Position your camera (with lens attached) so that it is parallel to a flat surface that has some detail (a brick wall is ideal). Focus the lens so that the center of the image is as sharp as possible and take a photo.

Now look at the image at 100% and see if the image is as sharp all the way across the image as the center or not. As mentioned earlier, field curvature isn't necessarily a smooth round curve, so the image could be sharp in the center and corners, but soft 25% in from the edges. 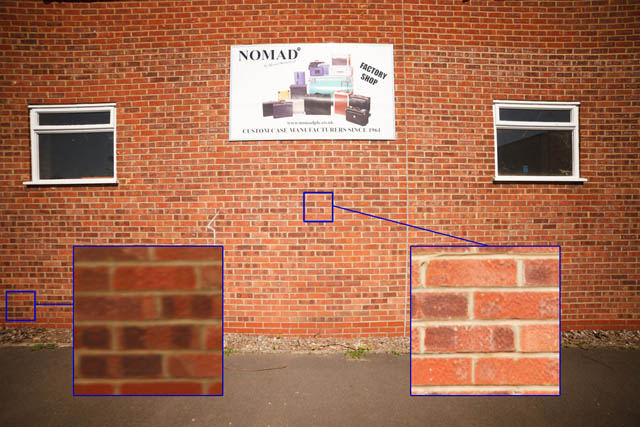 If you see an area of the image that is noticeably softer than the center, try refocusing the lens to get that area of the frame as sharp as possible. Then take another photo. If you find that the area you focused on is now sharper than the previous image, but the areas in the previous image that were sharp are now softer, then this means your lens has field curvature. 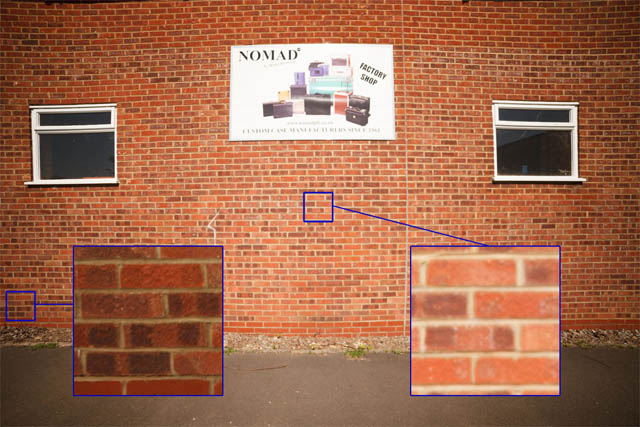 When the lens is focused for sharp edges the center becomes soft, indicating strong field curvature

Field curvature is just a fact of life. Designing lenses to project an entirely flat field is very difficult. In the future we may have curved image sensors, which will allow much simpler designs of lenses where the field of focus can be curved, but curved to match the sensor. But for now we have to put up with it. Or try and use it creatively 😉