Knolling photography involves capturing images of objects grouped together and arranged neatly, either parallel or at right angles to one another. The look of the resulting image can be quite clean and clinical - as opposed to a jumble of items, everything is neatly laid out.

The technique is very useful whenever you want to photograph a group of items, with each item clearly identifiable. Knolling is often used for sharing an image of the contents of a bag. But, of course, it can be used for other things too, such as the ingredients for a meal, clothes that form an outfit, a small book collection, or just a collection of related items you think would work well for a knolling photo. 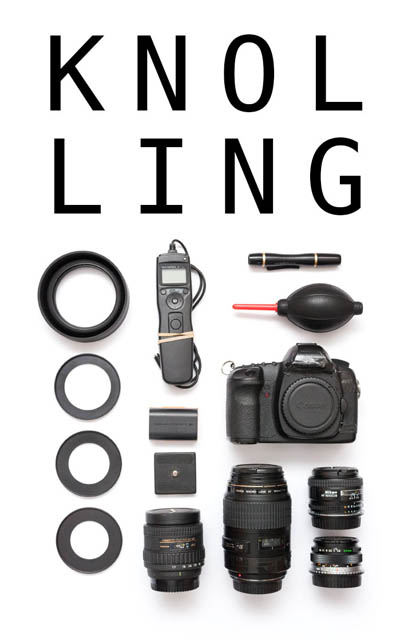 While people have been arranging objects neatly for centuries, the specific technique of knolling and definition of this technique only came about in 1987. It was first coined by Andrew Kromelow, who worked in a furniture fabrication shop where chairs were being designed for Knoll, known for its angular designs.

Kromelow worked as a Janitor, and kept tools tidy rather than leaving them lying around or just jumbled together. He arranged the tools parallel and at right angles to one another, spread out, so that all tools could be easily seen and found at once. He named the process Knolling because the strong angles were similar to that of the strong angles and parallel lines found in Knoll furniture.

The artist Tom Sachs spent two years working as a fabricator at the same shop as Kromelow, and picked up the technique and use of the term from Kromelow. After setting up his art studio, Sachs promoted the use of knolling in the studio. One of his assistants produced a '10 Bullets' studio manual when leaving, one bullet of which was to 'always be knolling'. In 2010 this booklet was then used as a basis for a video.

Although the ten bullets manual and video were designed to give information on how Sachs expected employees and interns there to work, the video was very popular as a general guide to effective working in a creative environment.

After Sach's promotion of the technique, it started to gain more popularity. The Things Organized Neatly blog must be one of, if not the earliest example of a curated collection of Knolling images. And it is still updated today. Knolling is now quite popular, and you will often see it used as a technique when people want to show off the contents of their bag, or what's on their desk, or what tools they use for a certain job, etc.

Before you start laying your items out, think about the background you will lay them out on. You want something that is quite plain and does not distract from the items. Importantly, it also needs to be large enough for you to fit all the items on in a neat arrangement. 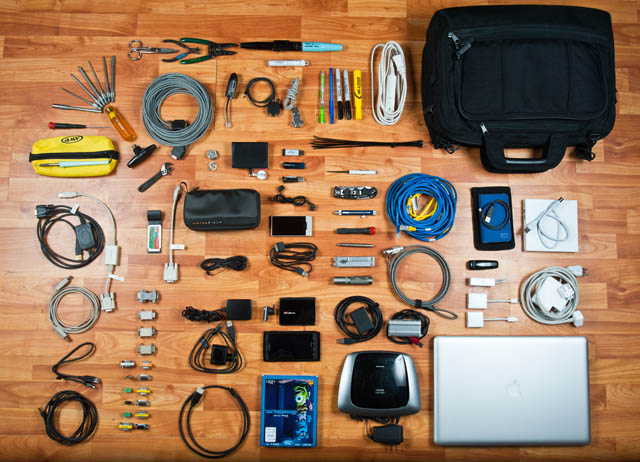 You can use a large sheet of plain white card as the background. However, think about what type of feeling you are trying to give with your image. Some items may be better shot on a textured wooden background. Or on concrete. Or grass. Or a sheet of old wallpaper.

The background should complement the items you are showing. But it needs to contrast (in terms of color or tone) with the items too. Otherwise it will be hard to pick the items out from the background when viewing the image.

If you don't have a background large enough for laying all your items out on, consider splitting the image up into groups of items that will fit on your desired background, and photographing each group individually. As long as the lighting is relatively even (especially on the background), this will then allow you to later composite the images together into a single image using image editing software.

Not really a tip, since it is integral to the technique, but make sure that you arrange items neatly, grouping similar items together. Items should be placed so that they are either parallel or at right-angles to one another. Try to keep spacing relatively even between each item / each set of items. 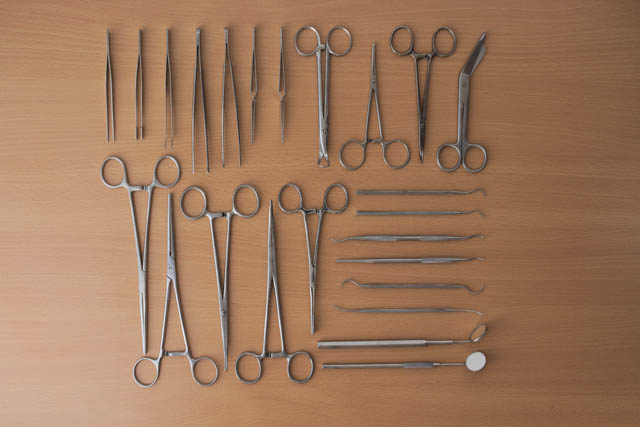 For a Knolling photograph you typically want an overhead view, looking straight down at the arranged items. You want everything in equally sharp focus. This can cause an issue if some items in your collection are much taller than other items. To get the tops of the tall items in focus as well as the other much smaller items, you need a large depth of field.

So, if you're using a DSLR or mirrorless camera, you'll probably want to choose a relatively small aperture, such as f/8. This will give you a large depth of field, putting most of the scene in sharp focus.

Alternatively you may want to try shooting the image with a compact camera or phone camera. These typically have small sized image sensors that natively provide a large depth of field, even at large aperture settings.

If all your items are relatively flat, then the depth of field doesn't matter so much. Everything can fit within a relatively thin plane of focus, and so using a small aperture is not so important. 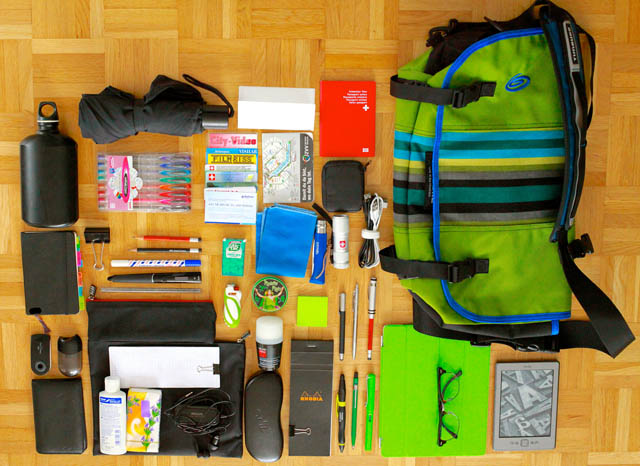 In terms of lighting, you typically want fairly soft lighting coming down at an angle of around 45 degrees. Lay your items out on the floor or a table, and use available light from a window, and you should get pretty good lighting. If using a speedlight flash you can just aim the flash towards a wall so that the light bounces back down onto the items at around 45°. 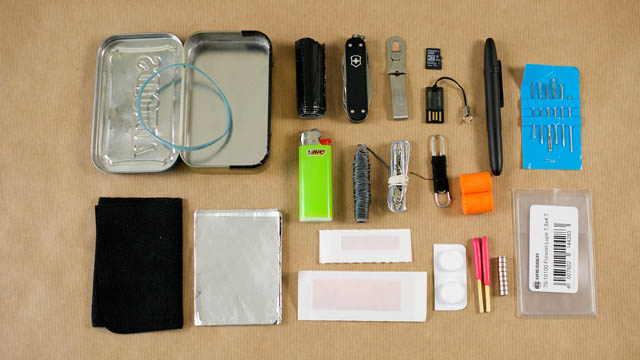 The reason for lighting like this is that we want the lighting to bring out some texture in the items, and give a shadow to bring out the three dimensionality of the items. If lighting was just from above, then it would give very flat lighting, and everything would look 2D. Likely it would also cast your shadow over the items, since you will need to lean over them to photograph them.

Lighting from a very low angle, on the other hand, would produce very long shadows. Sides of the items that were facing away from the light would appear very dark, while those facing towards the light would be quite bright. Lighting at 45 degrees just gives a nice balanced light where you get shadows, but not too much.

Knolling can be very useful to obtain a pleasing image when photographing a group of items that could otherwise be a bit boring. Why not give it a try, photographing the contents of your handbag, your camera bag, or the ingredients for a home-cooked dinner?