With the increased availability of photography editing software and the introduction of new, easier to use compositing tools, 'trick' photos have become much more common. Compositing together photos to create a trick photo is not a new technique though - even in the early 20th century photos would be cut up then stuck together to form a new image.

However, trick photography isn't just compositing photos together to make something new. There are plenty of tricks that can be performed right in camera, with no Photoshop wizardry needed at all.

In this article we'll look at 10 different tricks that can be achieved wholly in-camera but usually work best with some post production editing as well. 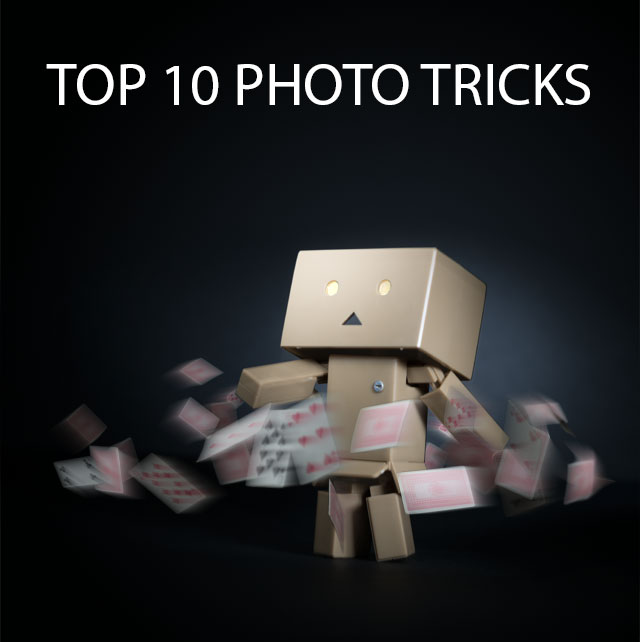 One of the classic photography tricks is forced perspective. This is where you compose the image in such as way that it becomes hard to discern the distance of a subject in the scene. By removing depth cues it allows for creative interaction between foreground and background subjects. 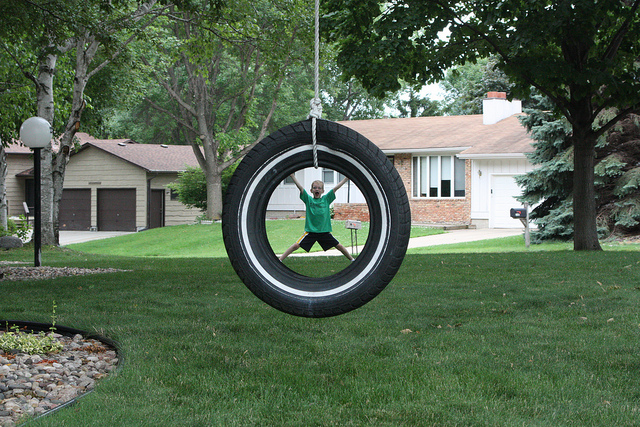 Or you might have a small subject in the foreground (such as a toy car) that appears to be a standard size compared to the background. The removal of depth cues means you can't tell the difference in distance between the foreground and background, producing this illusion of size.

The easiest way to remove depth cues from an image is to photograph somewhere very flat and devoid of any detail. For example, desert, a large beach, snow, large body of water. The lack of any items in the scene to give an idea of distance allows this trick to work. 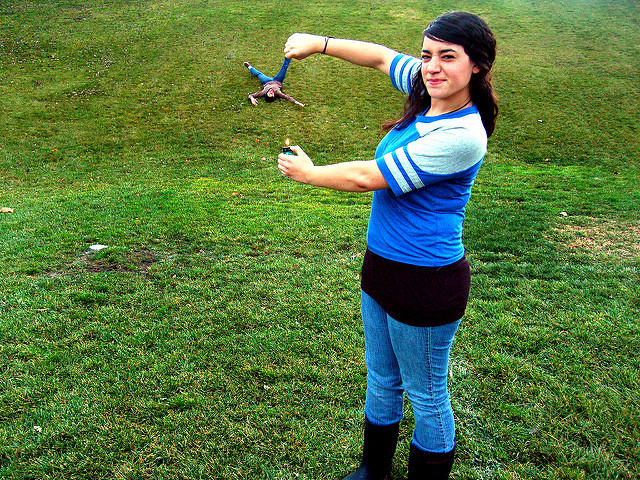 Another technique, which will work for some scenes, is to put the camera very low to the ground. Depending on the scene, this can hide receding items in the scene behind closer items, getting rid of them as depth cues. It can also get rid of converging lines, which again indicate depth.

For this trick you compose your photo to put two elements together that contrast one against the other. This works best when the elements are ones the viewer wouldn't normally expect to see together. 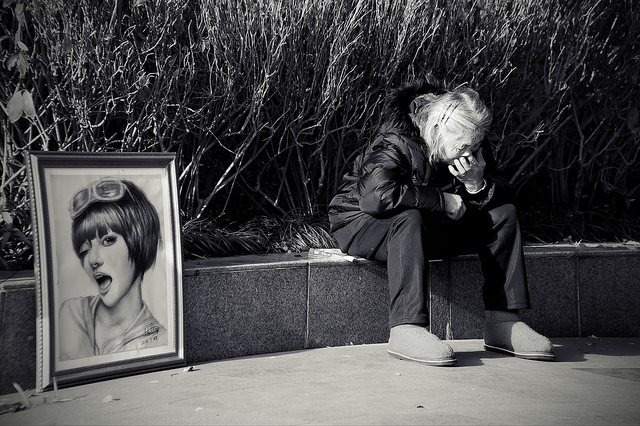 For example, new and worn-out, big and small, old and young, rich and poor. Sometimes you'll find juxtapositions in natural scenes you can photograph as-is. Or you can create such a setup artificially. 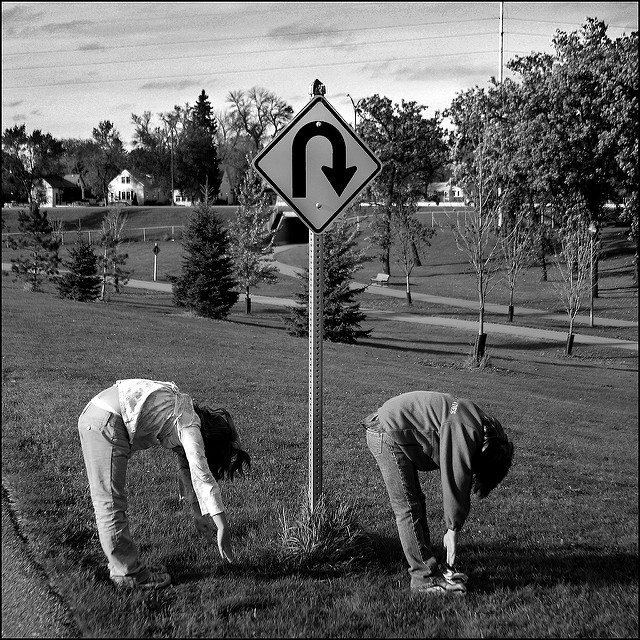 Other times you might find a scene that requires use of some of the other tricks mentioned in this article, such as forced perspective or reflection to create an effective juxtaposition. 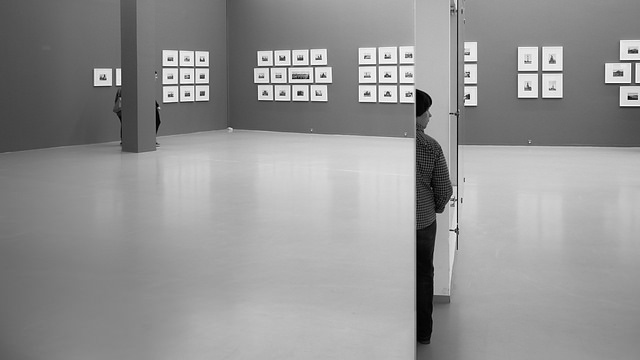 An impossible photo can have a much stronger effect than a drawing or painting, simply because people are used to photos depicting reality. By producing a photo that goes against our sense of reality, it makes the viewer look closer at the image to try and make sense of it. 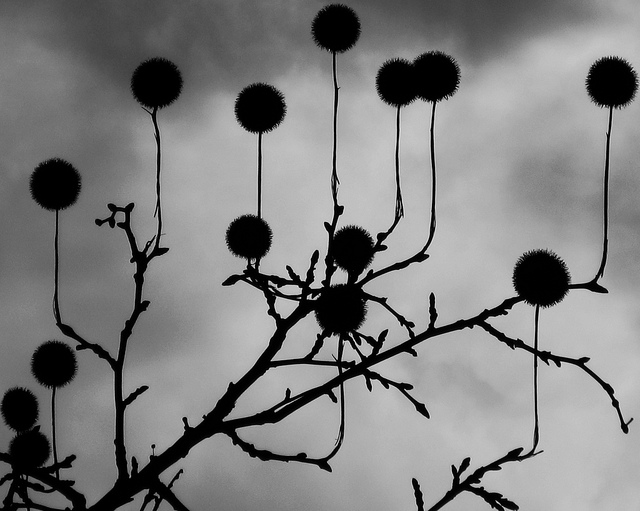 This is particularly true for photos where there are just one or two elements of the photo that are impossible, while the rest is grounded in reality. 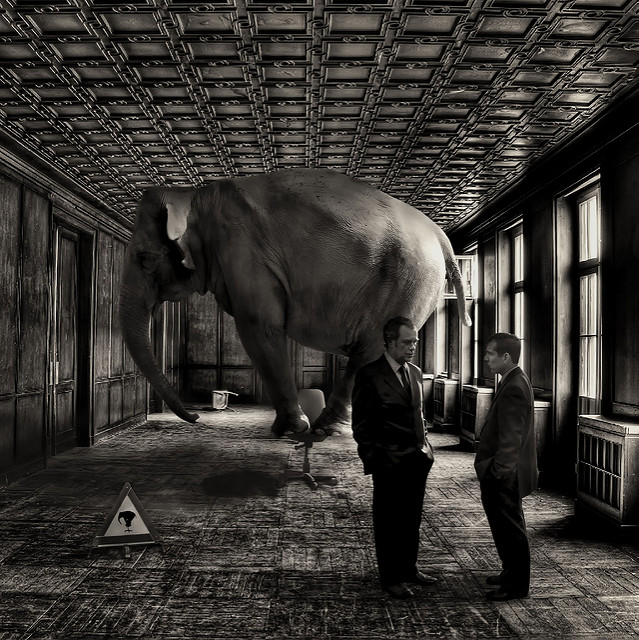 Afterwards Tom and Eric weren't exactly sure at which point during their discussion the elephant had entered the room by David Blackwell. on Flickr (licensed CC-BY-ND)

An impossible photo can be achieved in-camera via clever framing. Or shooting in a dark environment and lighting each part of the scene separately. But generally impossible photos tend to be a combination of both in-camera work and post-processing (compositing). 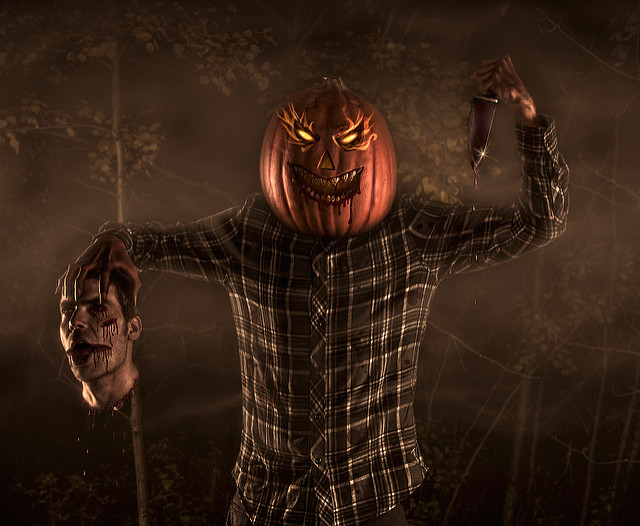 Getting as much right in-camera as possible makes the compositing process easier. For example, for a photo of someone walking on water, having them actually walking in very shallow water makes it easier to create a realistic composite than if they are walking on solid ground.

Probably one of the most popular photography tricks is that of multiple exposure. This is where you add the brightness of one photo on top of another photo. 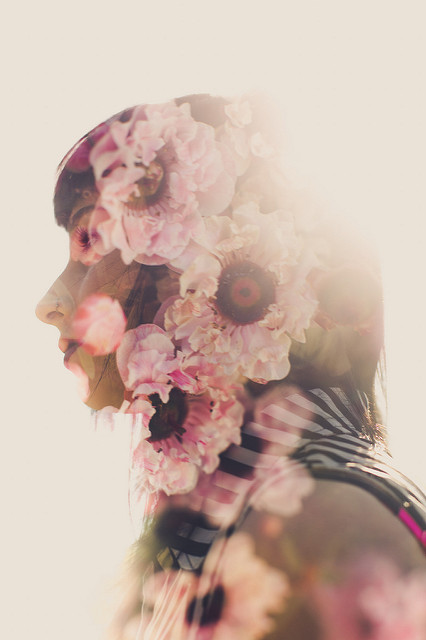 You can create multiple exposures using image editing software by overlaying one image on top of another and using the screen blend mode. However, most digital cameras feature a multiple exposure mode built in. Indeed, this technique actually is known from the very early days of photography, and can easily be achieved with almost any film camera too. 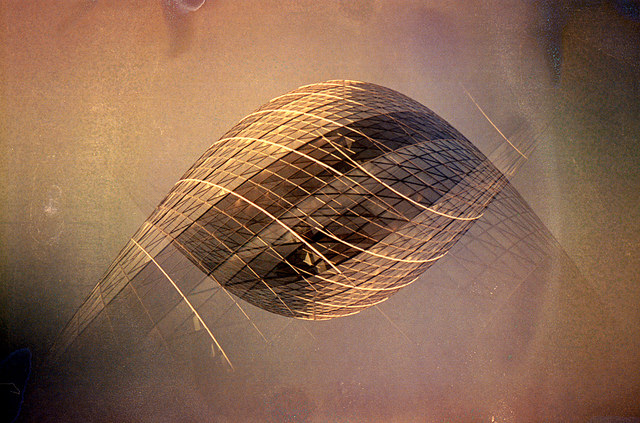 Photography is all about capturing light. But you don't have to use only static light sources. Nor do you need to photograph only reflected light. So long as ambient light levels allow, you can take a long exposure photograph and move the light source during the exposure, thus painting with light. 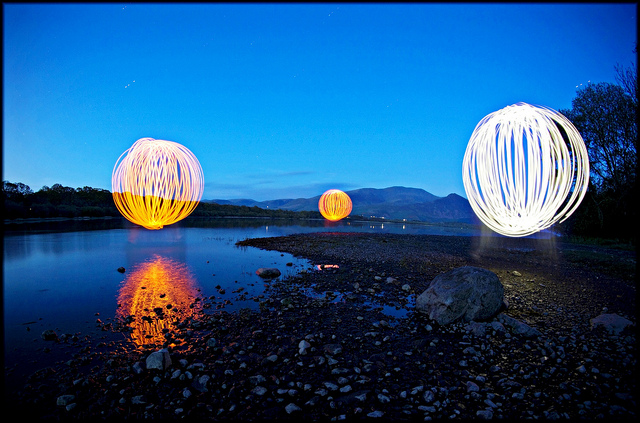 You can't really achieve this technique during the day as the sun is too bright for a long exposure. While you could used ND filters for a daylight long exposure, you would need an extremely powerful light source for it to have any observable effect on the resulting image. So basically you're restricted to shooting at night / twilight or indoors. 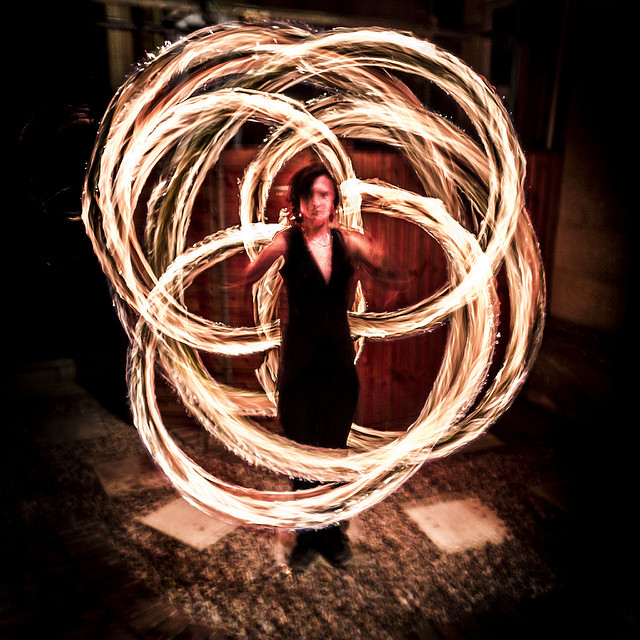 You can either paint light onto a subject, or use the light source (so long as it is a constant light source, not a flash) to draw a trail of light in mid-air. And of course, you can combine both techniques.

Underwater photography can have quite an impact, simply because it is not common. Most photographers don't have a waterproof camera or waterproof housing for their camera. And even if you do, working underwater presents a lot of extra challenges. 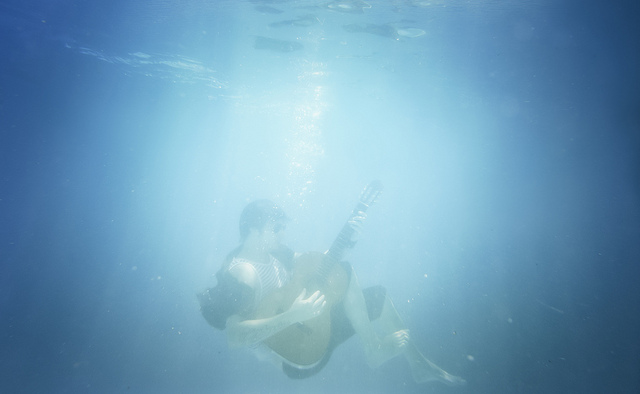 It can sometimes be possible to create a composite photo that appears to have been taken underwater, but actually was not. But achieving this with a realistic look can be even more tricky than actually shooting underwater, due to the way things like fabrics appear in water. 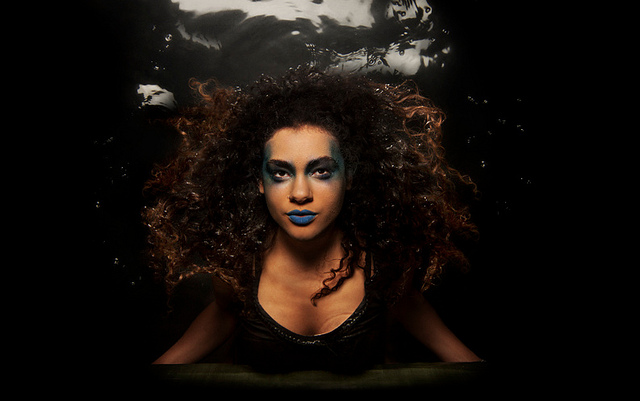 You'll likely want to shoot close to the water surface, as light levels drop off rapidly as you get deeper. You may also want to consider attempting a photo that shows both above and below the water. This can be extremely tricky to achieve though, and you may want to photograph each separately and then attempt a composite later.

The levitation photo is a popular trick photo, which some may consider over-done. But that doesn't mean all forms of 'anti-gravity' photos are tired and cliché.

To have something floating is fairly simple - all you need is a fast effective shutter speed. This freezes the object in mid-air. With careful composition (or direction of a subject), then the item can appear to be floating rather than falling. 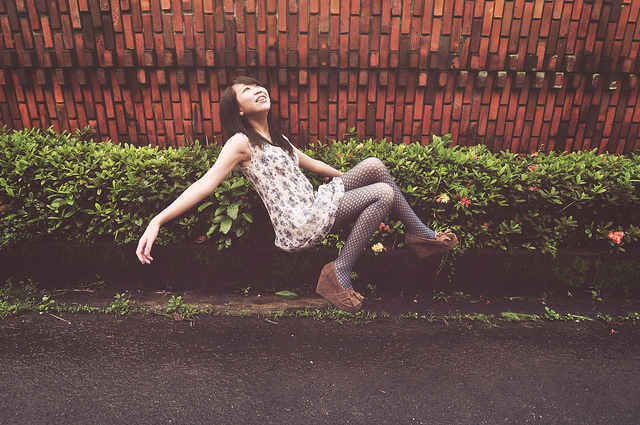 To achieve a fast effective shutter speed you can obviously use a fast real shutter speed. Most cameras go to 1/4000s, and some even faster, which is more than good enough unless you're trying to freeze something really fast.

The other option is to shoot somewhere that is quite dark and use flash to freeze the image. Flash has a very quick duration, and if it is the main light source in your image, then the flash duration becomes your effective shutter speed. 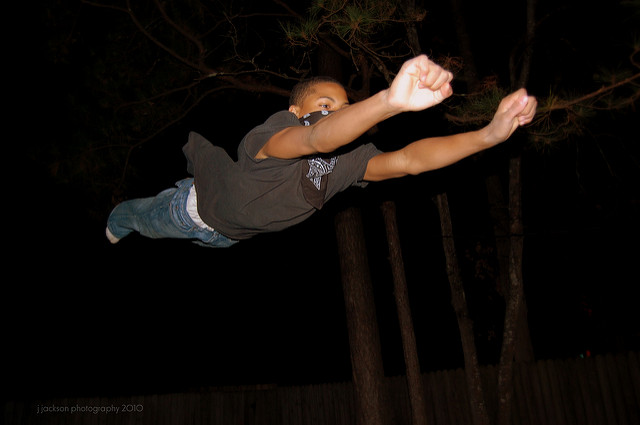 And of course, you can always take the editing option, and composite floating items into an image later. 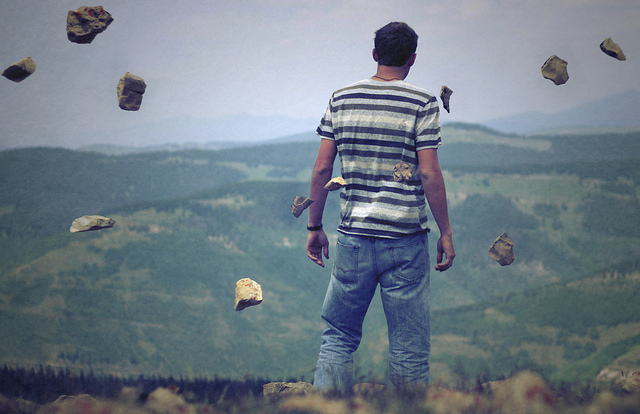 Normally distortion is something photographers look to avoid. Most image editing software includes controls to correct distortion. And distortion is always one of the factors looked at on lens tests. But distortion, much more than you would get in any normal lens, can be used for creative photography.

By photographing a subject through curved glass, water, or plastic, the subject will become distorted. Some parts may be shrunken, while others stretched and enlarged. You can use a glass jar, a glass filled with water, a bent plastic mirror, or anything that will give a distorted view. 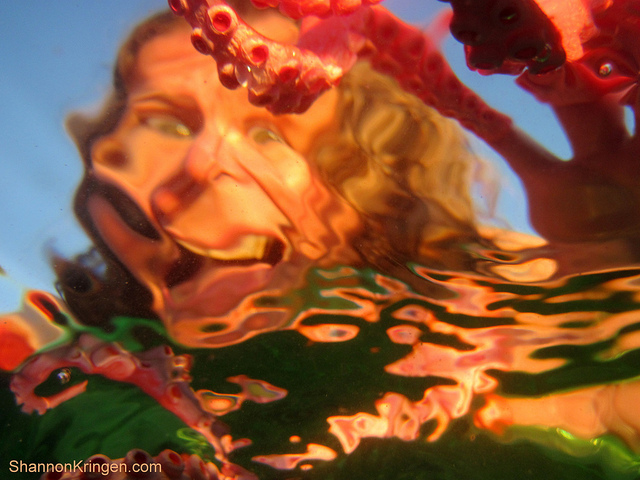 For extra effect, try composing your image to include some undistorted elements as well as the distorted view.

Reflection can be used to superimpose one image on top of another when photographing a partially reflective and partially translucent material, such as a window. 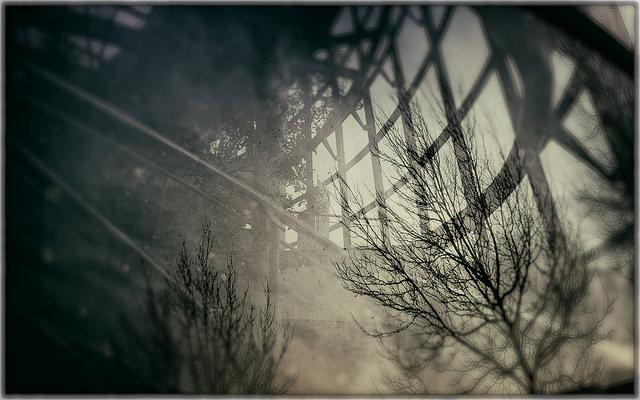 Alternatively, it can be used as more of a framing device, with the subject in the reflection, surrounded by an unreflective surface. For example, a person reflected in a puddle in the street.

It can also be used for a 'simple' mirror image, where you photograph both the subject (or part of it) plus the mirrored reflection all in a single frame.

The trick with reflections is getting your camera at the right angle so that the reflection appears where you want, while also keeping the composition of the surrounding area (or view through to the other side) where you want it.

Changing the color of an image can give a very different feel. You can use a cool blue color to trick the viewer into thinking the photo was taken somewhere very cold. Or use a warm orange color for the opposite effect. 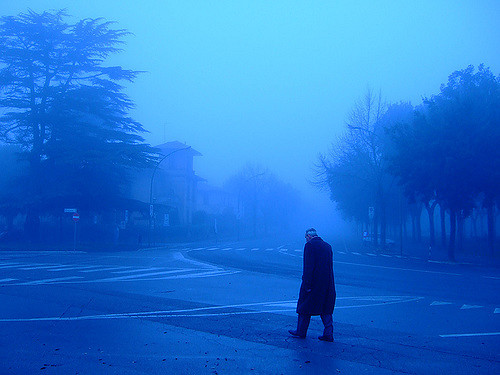 Another option is to use colored lighting. When using artificial light, you can easily place a colored gel in front of your light(s) to get any color light you like. You may actually want to combine colored light and white balance for a stronger effect. 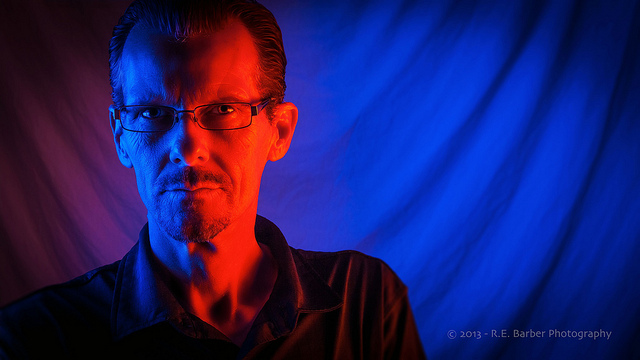 Lastly, you can always edit colors after-the-fact using image editing software. This gives you the greatest flexibility. You can change colors separately in different parts of the image, or overall for the whole image. You can alter the colors of highlights, midtones, and shadows separately. You can even swap colors around completely. 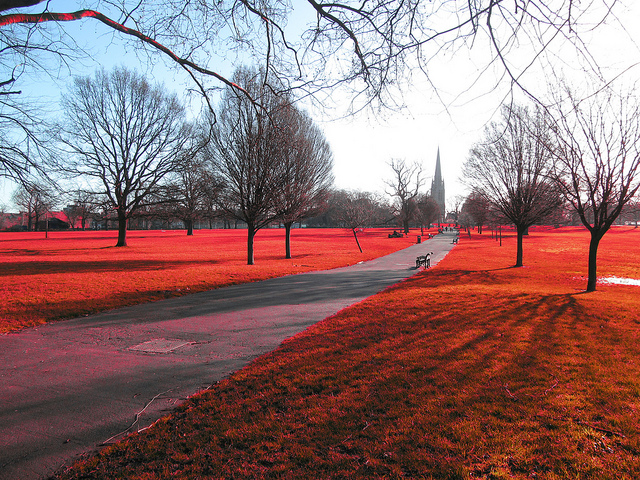 There are lots of other photography 'tricks' you can experiment with, such as various slow shutter speed blur techniques, clones, light stencils, droste effect, advanced compositing, etc. But I think the ten tricks mentioned above are probably the most effective. Do you have a favorite photography trick? Why not share it below?