Cities can provide a large number of photo opportunities, many of which are not available in smaller towns or elsewhere. Whether you live in a city or are planning to visit one, in this article I'll share some ideas for interesting subjects and tips for capturing great photos of them. 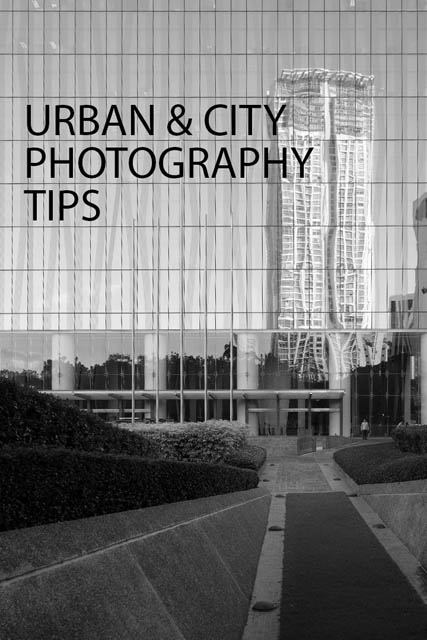 One of the subjects you can find in many cities, but missing from most towns, is the business or financial district. Filled with concrete and glass skyscrapers, this can be a great place for photography.

Using a wide-angle focal length and pointing your camera up to fit in as much of the tall buildings as possible can create an image with strong converging lines. The sides of the buildings get closer together the further up the buildings you look, drawing the eye into the image. 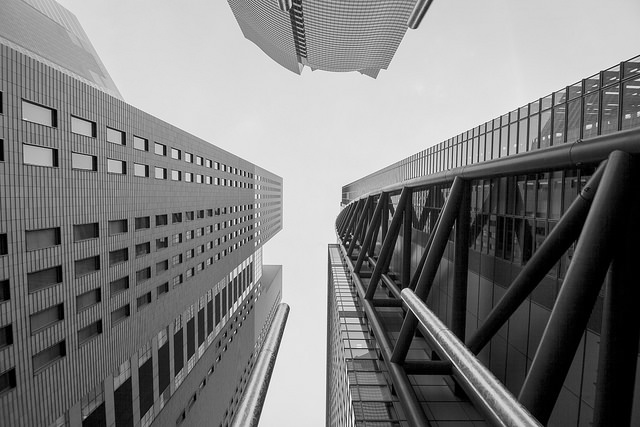 The strong lines and shapes this type of shot can produce a compelling image. Depending on the building, and the angle you hold your camera at, it is possible to turn the buildings into an abstract image of dark shapes (the buildings) against a brighter sky. (Or vice versa depending on the weather and the color of the building you're photographing). 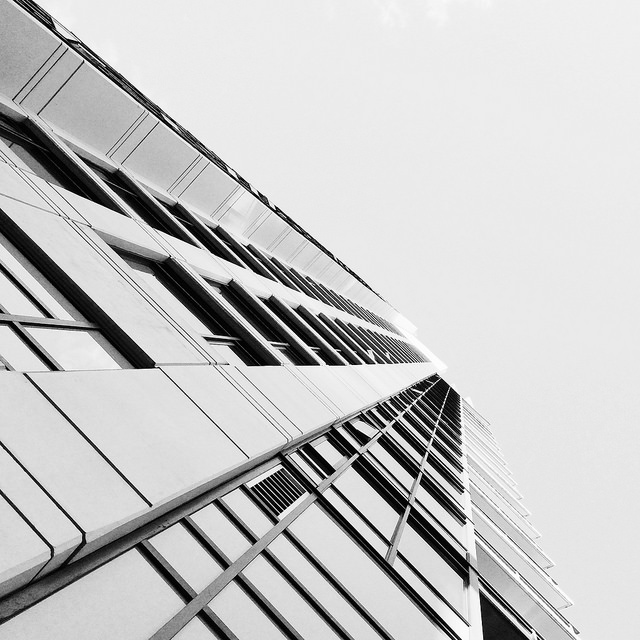 Look out also for buildings displaying innovative / unusual architecture. These can make great subjects just by themselves. Focus on capturing the lines and shape of the building.

Buildings covered with large amounts of glass can provide interesting subjects in the form of reflections in the glass. The strength of the reflection will depend on the angle of light (time of day) and where you're standing (which, of course, also affects what you see reflected in the glass).

Blue skies with white fluffy clouds can look great reflected in the glass of a skyscraper. The softness of the clouds provides a nice contrast against the harsh lines of the building. But reflections of other buildings, which will often appear warped, can also make great subjects. 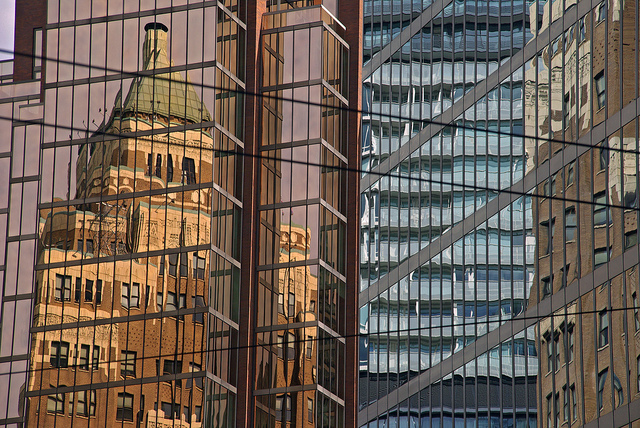 While shooting close-up in the streets between the skyscrapers can get you some fantastic shots, it's usually worthwhile to also try and put some distance between yourself and the area for a skyline shot. Skyline photos are best photographed at dawn / twilight or sunrise / sunset. 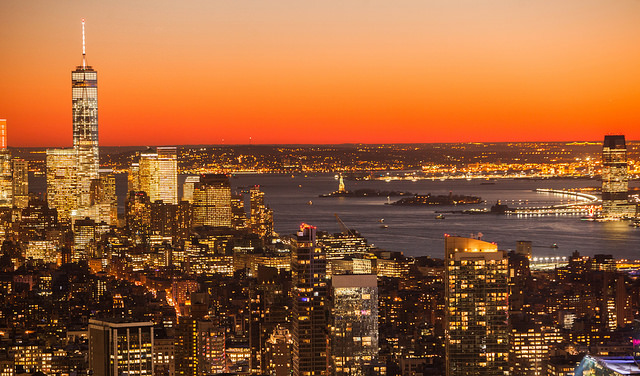 If there is a river or lake next to the large buildings, and you can get yourself on the opposite side, then this is even better. It enables you to get a great shot of the skyline, plus the reflection of the skyline in the water. 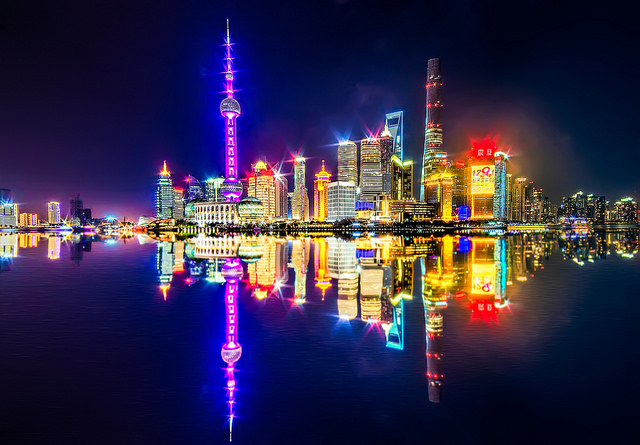 Photographing at dawn or twilight allows you to capture an image where the buildings have their lights on but there is still some color in the sky. Twilight is a slightly better time to photograph a skyline view than dawn, as there are many more lights switched on in the evening than there are at dawn.

Sunset or sunrise give quite a different image, where the tall buildings are bathed in the warm glow of the low sun. The low angle of the light also helps emphasize the shape and bring out the texture of buildings.

Most cities have a well developed public transport system, and this can often provide for some great photos. Underground train stations give some fantastic photo opportunities. Again, a wide-angle lens can be very useful for creating strong converging lines as the tunnel leads off into the distance. 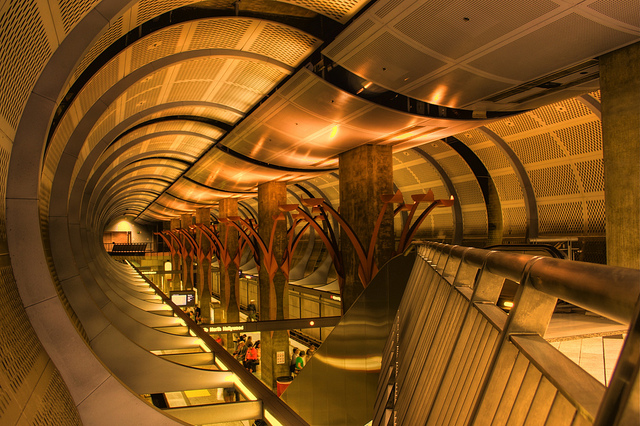 Above ground train stations, buses, and trams / trolleybuses can also be great places for photography. As well as capturing some photos of the stationary vehicles, try using a slightly slow shutter speed and capturing some images as the vehicle arrives or leaves. This adds a nice feeling of movement to the image.

When trying this type of photo, note that you will likely need to handhold the camera though - so don't choose (or let the camera choose) a shutter speed so slow that the whole image gets blurry. Particularly with trains, which come in quite fast, you don't need a super slow shutter speed to capture a good amount of movement. 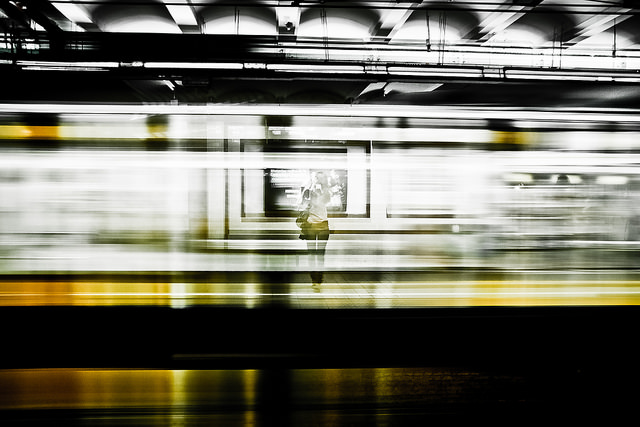 Most busy areas (such as public transport hubs) don't allow the use of a tripod. So you'll need to resort to careful hand-held technique for sharp shots. Many of these places are indoors and quite dimly lit, so you'll probably want to boost the ISO setting to allow for hand-holdable shutter speeds without the photos turning out too dark. For urban and city shots, the noise that using a high ISO introduces isn't necessarily a bad thing - it gives the photos a gritty look, which is often quite fitting.

If you're stopping at a cafe for a drink or a bite to eat, see if you can get a seat by a window or at table seating outside. This allows you take some photos of the city while you're there. The extra time you have to look around while staying in a single place gives you more time to really 'see', and pick out an interesting composition. 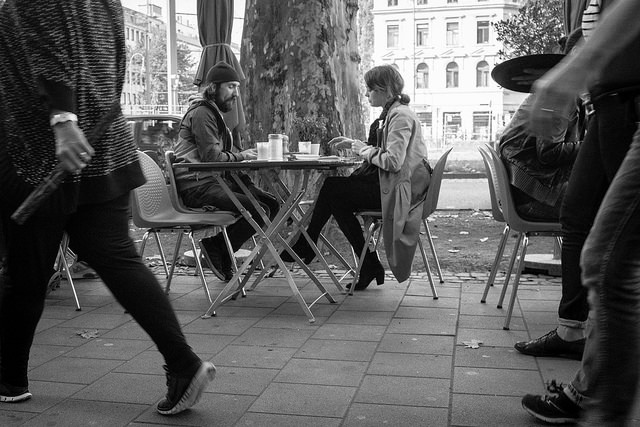 It can also be a good place to capture photos of interesting characters that walk by. When you're sitting down at a cafe with your camera rather than standing out in the street, you don't stand out so much. This can help you get more candid photos because the subject's don't necessarily realize they're being photographed.

Photos looking down at the street below give a different perspective, one which we are not used to seeing. Often compositions can be cleaner and less cluttered, and some scenes can even be turned into an abstract composition. 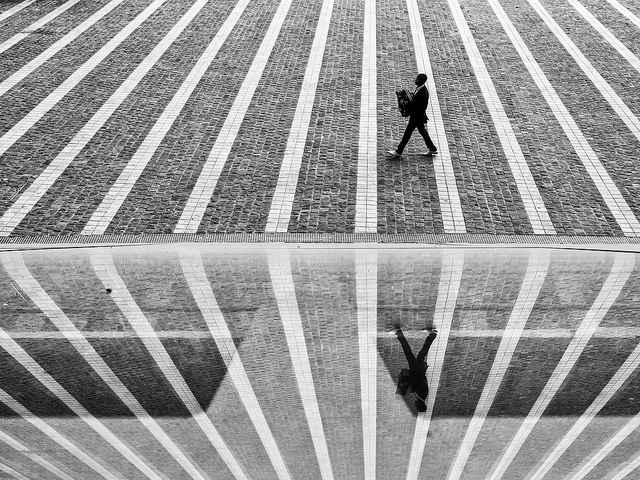 Although there are many tall buildings in cities that would be great to shoot down from, the vast majority are not open to the public. One building that is (kind of) open to the public though is multi level parking structures. These enable you to lean over the edge to get a clear shot looking down, with no dirty glass between you and the street below. Bear in mind though that these are private property, so you could be asked to leave by a parking attendant.

If you're staying in a hotel, then quite possibly you can get a good view from your hotel room. Many hotels feature balconies that you can go out on, which allows you to get a nice photo looking downwards at the street below. Often it can pay to wait a while until people / vehicles move into points within the frame that creates a pleasing image. 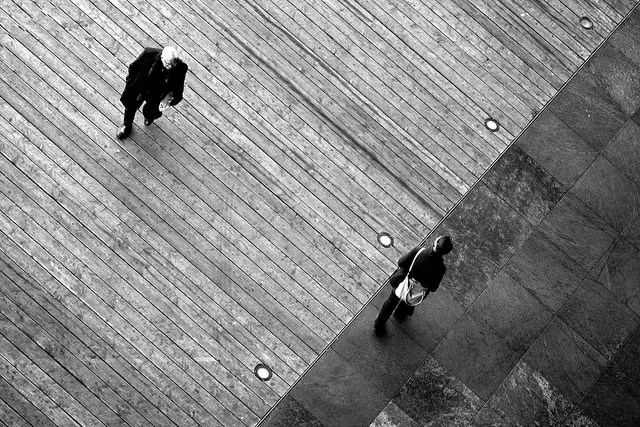 Bridges (especially road bridges) and elevated train stations are other options for taking photos from above. They get you a reasonable height above ground level, and you can take some photos of people or vehicles as they pass by below.

For capturing the large crowds that throng the city streets, a telephoto focal length can be very useful. This compresses the scene, so that items in the scene seem closer together (the opposite effect of a wide-angle lens). This helps emphasize how crowded the street is. 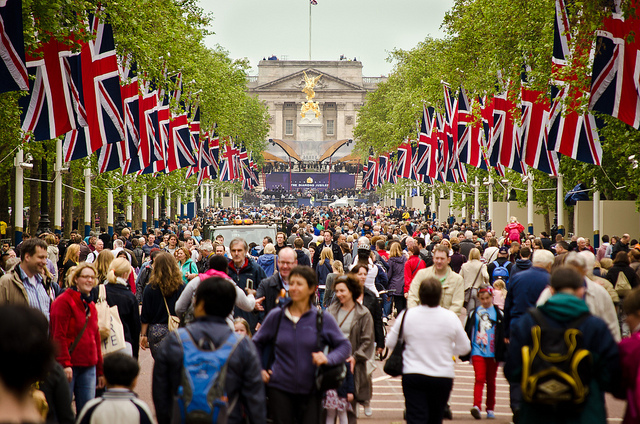 Getting up slightly higher than the area you're shooting will provide for the best perspective. This could be going up a footbridge. Or just standing further up a street that's on an incline, and shooting down at the lower area of the street.

In a similar way, a telephoto focal length is very useful for capturing photos of the many different signs displayed outside shops. The compression effect makes the signs seem very close together, when in reality there may be quite some distance between them. 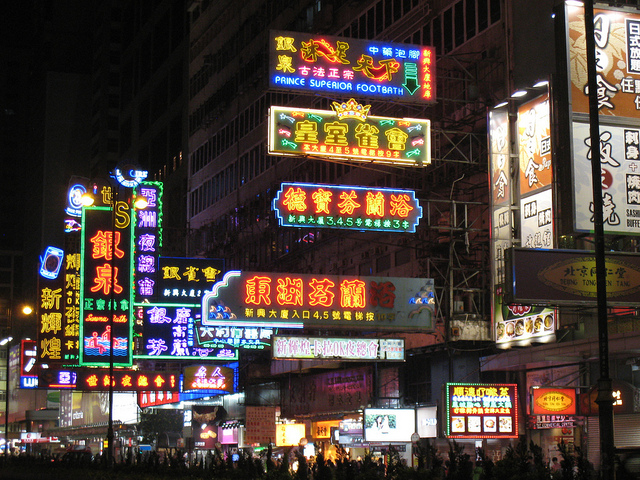 Getting out and about early in the morning (around 5 am) can be good if you don't like the hustle and bustle of the city. But it can also provide some photo opportunities that later risers will miss.

Shots of traders opening up their premises, goods being delivered for the day, market traders setting up their stalls. For coastal cities you may well be able to find a trade fish market to photograph early in the morning. 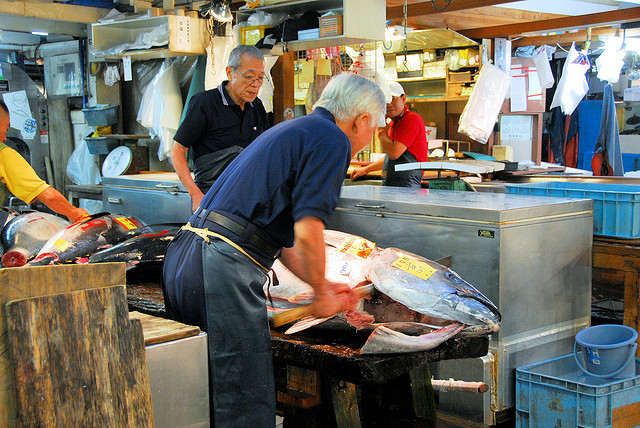 Early morning can also be about the only time you can use a tripod in the city streets without getting in anyone's way. If the weather is windy with a few odd clouds about, you may want to try capturing some long exposures of some of the buildings with the clouds blowing overhead.

Shooting into or in the same direction as the wind means the clouds record as white streaks that create converging lines, leading the viewer's eye into the image. Bear in mind though, that while dawn is the best time of day for using a tripod in the city, the weather needed for this type of shot is not that common around dawn.

I hope these tips have given you some good ideas for potential subjects to photograph next time you're in a city, or maybe opened your eyes to the photo opportunities if you live in a city and haven't thought of these before. Do you have any other suggestions for great subjects to shoot in the city? Or tips for photographing in cities? Feel free to leave a comment below.