Winter time can be quite cold, which might put you off going out with your camera. But this time of year brings with it photographic opportunities not available at other times of year. So wrap up warm and brave the cold to grab some great shots. 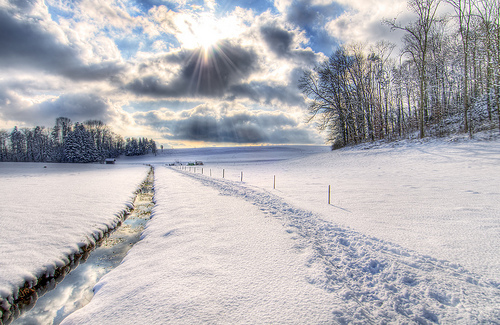 In this article I'll share a few tips about shooting in cold weather, and how to make the most of what the winter season offers.

During winter the sun spends a lot of the day quite low in the sky. This results in longer periods of soft warm light than you get in the summer. Make the most of the winter light while you can. 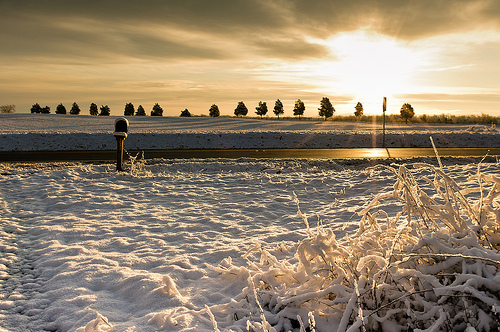 Sunrises are much later in winter, meaning you don't have to get up early to see them. Great if you're not an early riser. For many people it can be worth leaving a little earlier for work, and then stopping somewhere on the journey to grab some nice sunrise shots.

Scenes can be completely transformed by a blanket of snow. Capturing good photos of snow can be a little tricky though, so here are a few tips:

It is a good idea to set your White balance correctly, as otherwise you may end up with snow that looks more blue than white. Set the white balance to daylight or cloudy depending on the conditions, or set a custom white balance using the snow.

Snowy scenes will throw off your camera's exposure metering, resulting in photos where the snow looks more grey than white. To correct for this, apply one to two stops of positive exposure compensation. 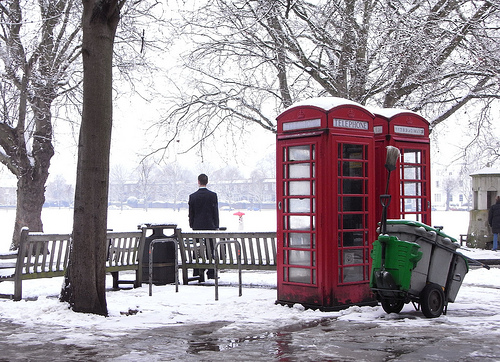 If shooting in falling snow, it is a good idea to give your camera some protection. Using a lens hood will make it less likely that you'll get flakes landing on the front element of the lens. You can also cover the camera with a plastic bag that has holes at both ends. Use a couple of elastic bands to keep it snug around the lens.

To capture the texture of snow, it really helps to have side lighting. Thankfully at this time of the year the sun is low in the sky most of the day, so side lighting isn't difficult to find. 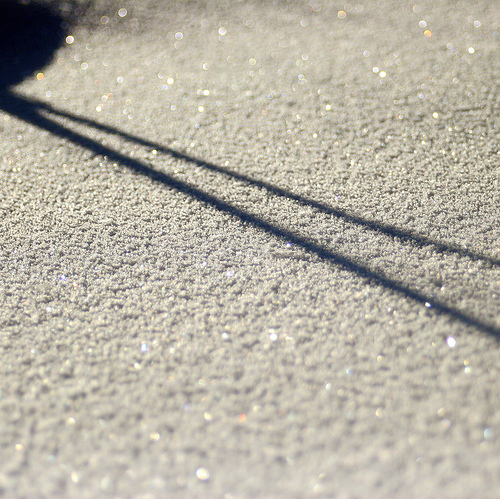 If the sky is cloudy and overcast though, you will find it hard to bring out the texture of snow. For shots of a small patch of snow, an external speedlight could be used to add in side lighting. For larger landscapes there is not a lot you can do except wait for a sunnier day.

Look for contrasts against the snow. Trees and twigs sticking out of the snow work well with their very dark tones contrasting nicely against the white snow. 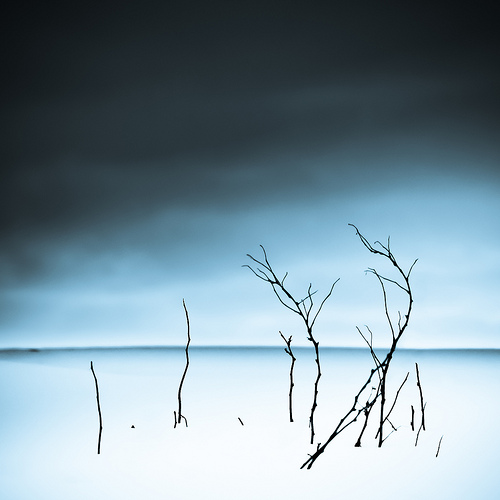 As well as tonal contrasts, look for color contrasts also. Bright saturated colors will stand out well against the snow. This could be red berries, someone wearing a colorful coat, or the sides of a building that aren't coated with snow. 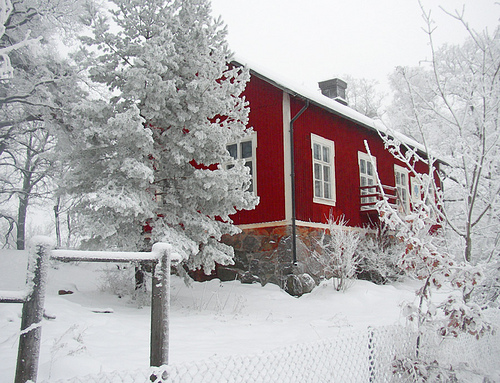 The snow acts like a giant reflector, bouncing off light and filling in shadows. This can be great for portrait photography. 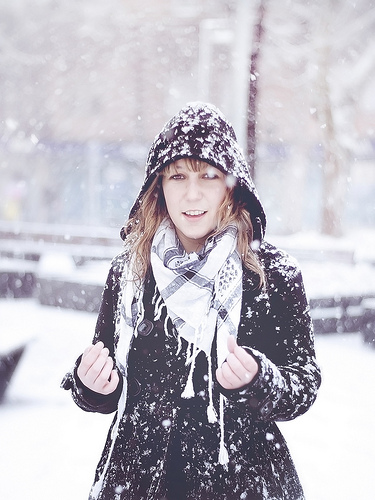 If you have kids or grandchildren, don't forget to get some shots of them enjoying themselves in the snow. Children playing in the snow, making snowmen, sledging, and having snowball fights can all be great photos. Even if these photos don't turn out to be technically great, you'll still treasure them for the memories they provide. 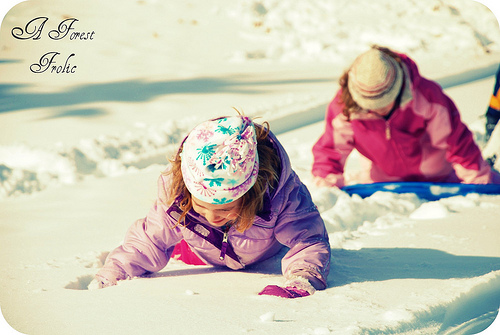 If you don't get any snow at winter, it is often cold enough at least a few times over winter that you'll get a frost. Hoar frost‎ is the most amazing kind of frost, where plants and trees get covered in a network of large ice crystals. 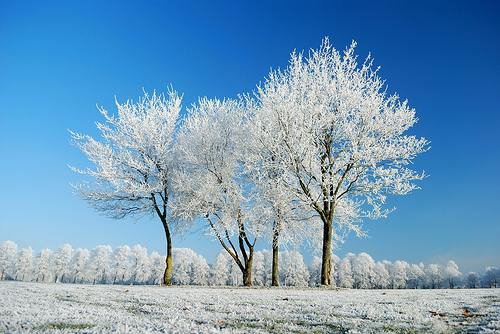 Sadly hoar frost only occurs in certain conditions, and you are much more likely to have a standard ground frost than see hoar frost. But even ground frost can give some excellent photographic opportunities.

Look for frost patterns on the glass of outbuildings, such as a green house. The frozen ice crystals adhered to the glass make for great close-up shots. 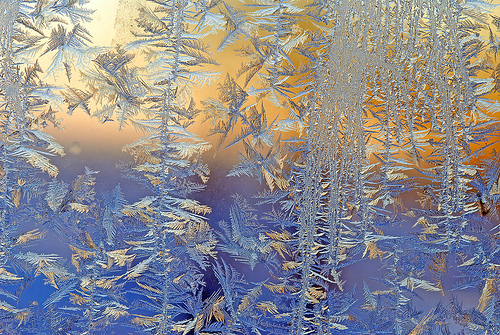 Frost on grass, frosty fallen leaves, frosty moss growing on a wall, etc. are all good subjects for close-ups as well. As with the snow, look particularly for subjects where there is a strong tonal or color contrast between the frost and whatever the frost is adhered to. 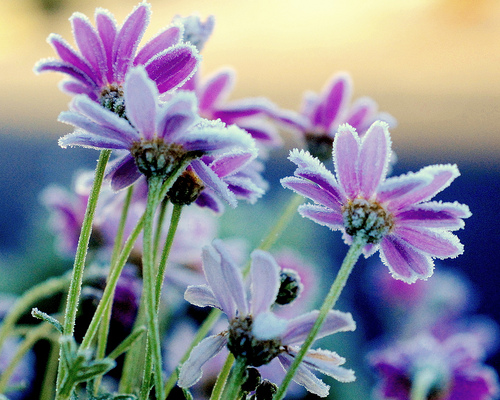 Misty mornings are probably more associated with Fall than Winter, but mist is still pretty common throughout winter. As the sun rises and starts to burn off the early morning dew or frost, it can create a very nice mist effect. 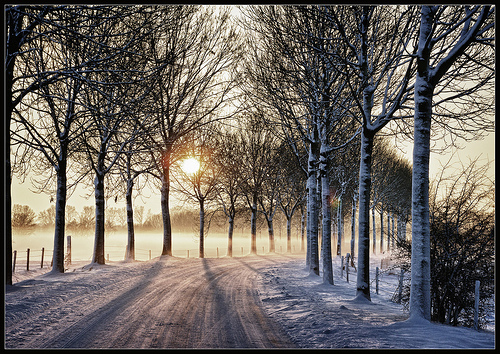 Mist can be used to help add depth to your photos as objects slowly fade away into the distance. Mist lit up by the early morning sun also adds another dimension to your photos.

In the cold, batteries can run out very quickly. It is a good idea to bring a spare battery for your camera. Keep it in an inside pocket, close to your body, where it will be kept warm.

If you move your camera from a cold environment into a warm one (e.g. bringing your camera inside from the cold), then condensation will form on it. Before you bring your camera back inside, place it in a zip-lock bag, optionally with some silica gel packets as well. After bringing the camera indoors, leave it in the bag until it has reached room temperature. You can then remove the bag without fear of any condensation.

It is a good idea to set up your camera before going out. Set all the shooting settings to what you think you'll be needing. If you're using an interchangeable lens camera, then attach the lens you'll be most likely to use to the camera. Get it all setup and ready to go so that you don't have to be fiddling around with it in the cold.

Winter is a great time for photography. Don't let the cold and slippy conditions put you off. Wrap up warm and get out there to take some great photos.

How to use Manual Exposure Mode What is Crop Factor?