Complete Guide to Neutral Density filters – Part 1: What are they used for?

Neutral density filters are like sunglasses for your camera. They reduce the amount of light that your camera receives. They can be very useful for long exposure photography, recording video in bright sunlight, and when you want to use flash in a location that is already brightly lit.

Over the next four articles we'll look at the different densities and mounts of ND filter that are available, how best to use them, and potential problems to look out for. To start off with, in this article we'll cover some of the ways ND filters can be useful for photography and videography. 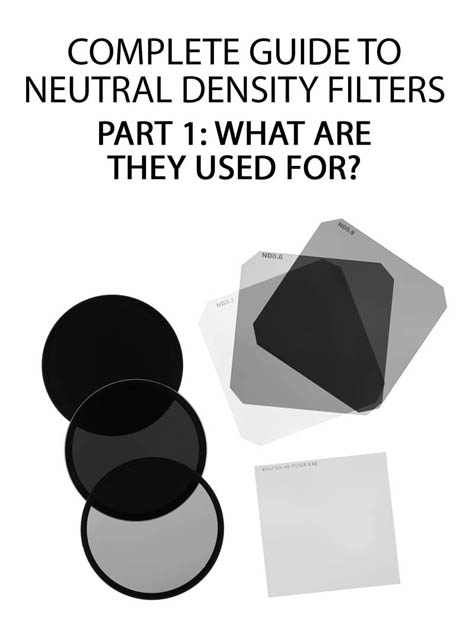 One of the main reasons for using an ND filter is for capturing long exposures. The brighter the light, the stronger the ND filter that will be needed for a long exposure.

For a 30s exposure at twilight you might not need any filter at all, due to the naturally low light levels at this time of day. But during the middle of the day you might need 12 stops of light reduction. (If you're not sure what a 'stop' of light is, it is a halving or doubling of the exposure, for a full explanation see Photography Basics – Exposure). For a 2 minute exposure at twilight you might need a 2 stop ND filter, while during the day you might a 14 stop filter for the same exposure length. (We'll look at the different strengths of ND filters available in more depth in the next article).

Long exposures allow you to record motion over time as a blur. You can capture clouds blowing across the sky, water in a stream, people walking along the street, waves at the seashore, or anything else that moves and turn it into a blur. When contrasted against the rest of the static scene, which remains sharp, this can create a compelling image. 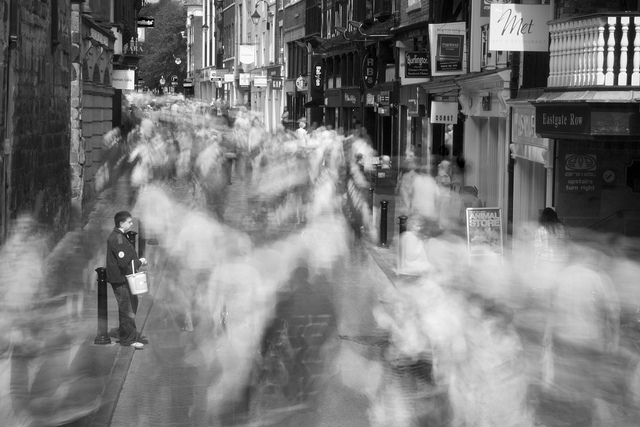 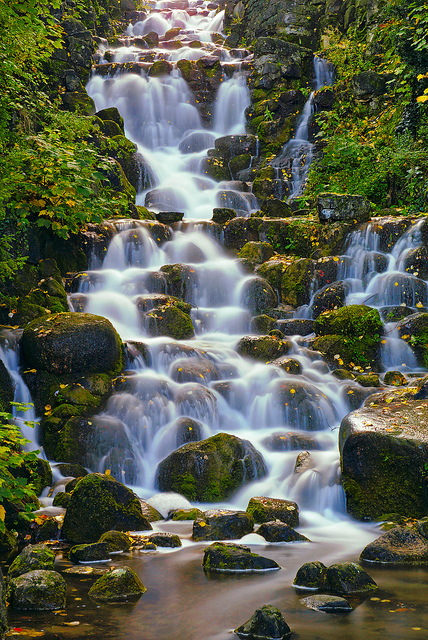 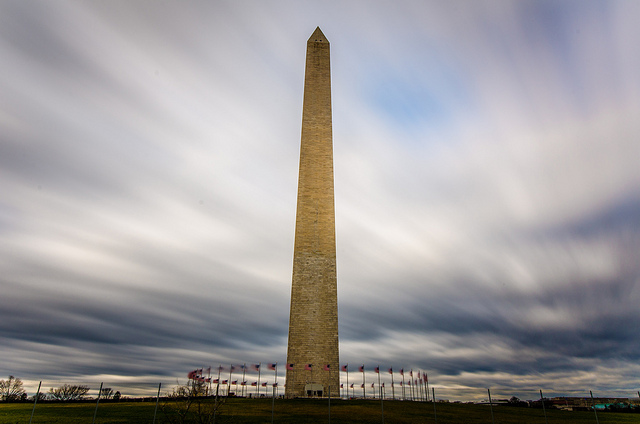 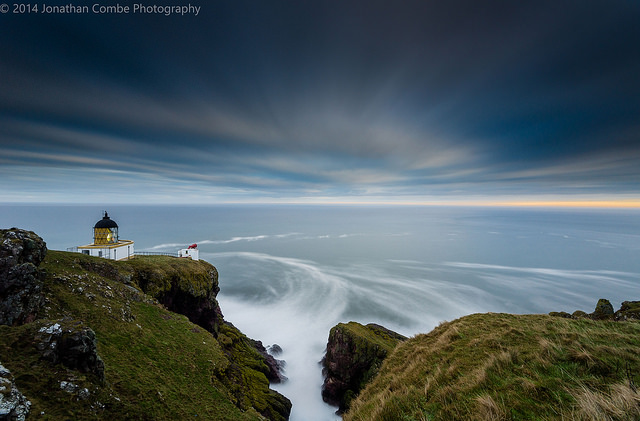 ND filters can also be used to slow the shutter speed down to levels that are not considered 'long', but are slower than they would be without the ND filter. The standard use is when you want to use a large aperture while photographing in bright sunlight. A large aperture (such as f/1.4) gives a nice shallow depth of field, but also lets in a lot of light. On a bright day it can let in too much light, resulting in overexposure.

Generally, most stills cameras, especially the newer models with electronic shutter options, have no problems with using a large aperture on a sunny day. You just have to use a very fast shutter speed such as 1/8000s. In some cases though the maximum shutter speed of your camera may still not be fast enough to prevent overexposure when using a large aperture setting. 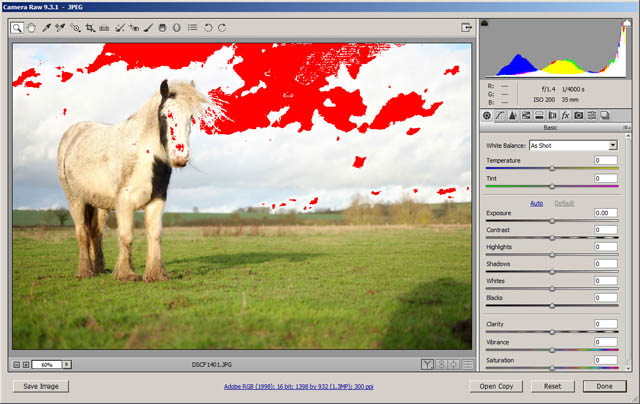 Despite being shot at the camera's minimum ISO and maximum shutter speed, this image is still overexposed. The red areas show where highlight clipping has occurred. Using an ND filter to bring the exposure down when taking the shot would have prevented this overexposure.

By adding an ND filter to your lens, you cut enough light to bring the exposure down to within what the camera can capture. E.g. You might have a camera with a max shutter speed of 1/4000s, but when shooting at f/1.4 in bright light, you find the image is overexposed by 2 stops. Simply add a 2 stops (or stronger) ND filter, and now the camera can capture the image without overexposure.

It is video where ND filters are much more useful for shallow DoF work though. Video is generally shot around at shutter speeds around 1/50 - 1/60. Faster shutter speeds than this can result in movement appearing jerky rather than smooth.

Getting a shutter speed this 'slow' can be very difficult in bright light without using a small aperture, which would mean most of the image would be in focus. To get a shallow depth of field, an ND filter can be used to cut down on the light, thus allowing a large aperture and 'slow' shutter speed suitable for video.

Occasionally, an ND filter can also be useful for flash photography in bright light. Many speedlights produced today have a high speed sync mode that lets them work at fast shutter speeds. But there are still plenty of flashes lacking this mode, which will only work at the camera's max sync speed - typically around 1/250s. At shutter speeds faster than this the flash will light only a portion of the frame.

If you're trying to capture an image in bright light, the shutter speed may well be over 1/250s, particularly if you're using a large aperture. By adding an ND filter you can bring the exposure down so that a shutter speed of 1/250s or less can be used. This then allows you to add your flash to the mix. 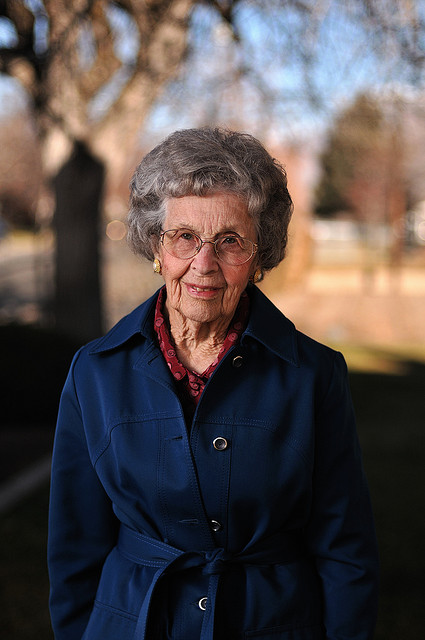 Note however, that you will need a pretty powerful flash due to the light reduction caused by the ND. The ND filter blocks all light to the camera equally, so while it brings down the brightness of sunlight, it brings down the brightness of the flash as well. Depending on how many stops your ND filter is, you'll likely want to have your flash at or near maximum power, and placed very close to your subject, to maximize the light output.

I hope this article has given you a good overview of the creative options an ND filter opens up to you, as well as the more technical options of controlling exposure. In the next article we'll look at the different strengths, types, and mount types of ND filter that are available.

How to give your photos a painted soft dreamy look Complete Guide to Neutral Density filters – Part 2: Types & Strengths explained

2 Responses to “Complete Guide to Neutral Density filters – Part 1: What are they used for?”