Very few digital cameras are made today with built-in memory, so a memory card is an essential accessory to be able to record photos. There are many different types of memory cards, and within each type, different capacities, speeds, and of course, costs. 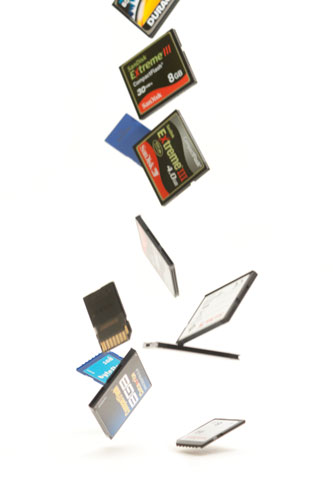 In this article I'll look at memory cards and explain the differences between them. I'll also look at why some cost more than others for the same capacity, and why it's not always best to get the largest capacity card you can afford.

There are a large number of different memory card formats available. The ones you might find in digital cameras are:

That's a quick overview of the different types of memory cards that cameras may use. The vast majority of cameras today use SD cards, with CompactFlash the second most popular. So let's look at these two in a bit more detail.

SD cards are available from a wide variety of manufacturers, and with a variety of capacities and speeds. Most cards produced today are SDHC (Secure Digital High Capacity) cards. This is a revision of the original SD standard to allow larger capacities and faster speeds. 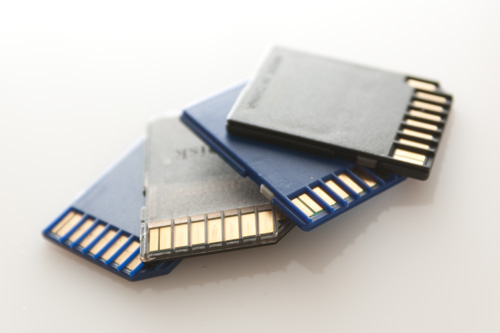 There is also an even newer revision, called SDXC. Many new cameras support this standard. Cameras that can use SDXC cards can also use SDHC and standard SD cards. Older cameras that support SDHC may not be able to use SDXC cards though.

SDXC is faster and offers higher capacity cards than SDHC. For most people SDHC cards offer large enough capacities and fast enough speeds that it is not worth spending the extra on an SDXC card.

MicroSD cards can also be used in cameras that use SD cards by way of an adapter. But the speed is not as fast a real SD card, so this is not really recommended.

CompactFlash used to be the memory format used in all DSLRs. So if you purchase an old DSLR camera, you may find that it uses CompactFlash cards. But today, it is only higher-end DSLRs that use CompactFlash. And even then, some of these have dual card slots to allow you to use SD cards as well or instead.

Most cameras that use CompactFlash use Type II slots. This means that they can accept both the slightly fatter Type II CF cards, as well as the standard Type I cards. It is very rare to find Type II cards for sale, all current CompactFlash cards produced are of Type I. Because Type II CF cards are so rarely used, future cameras may stop supporting them. (The Nikon D800 only supports Type I CF cards). 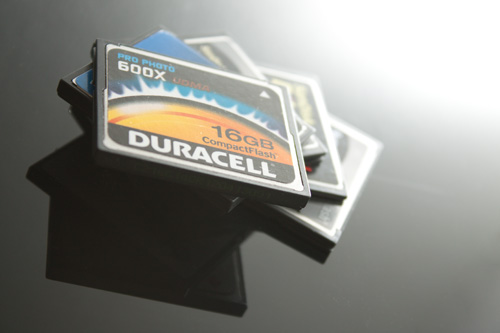 There have been various iterations of the CompactFlash standard. Generally new CompactFlash cards still work in older cameras, but there is always the odd exception. It is a good idea to check your camera manual to see if it gives a maximum capacity of CompactFlash card that it is compatible with.

SD cards can be used in CompactFlash slots through use of an adapter, but this usually gives very slow speeds.

Differences between SD and CF cards

In comparison with SD cards, CompactFlash cards are much larger. This means they take more space to store, but they are small enough that this isn't an issue for most people. The larger size can be seen as a benefit as it makes them easier to grip and less likely to get lost. 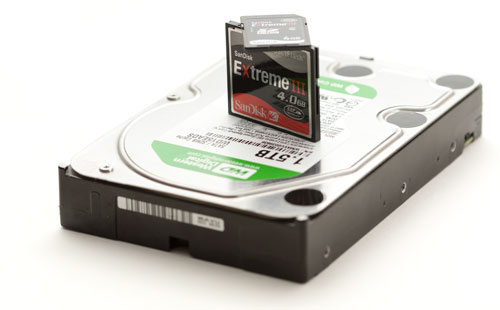 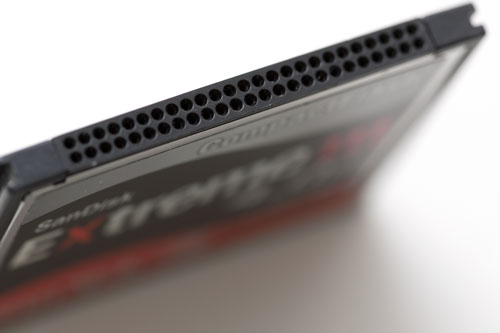 Connector with holes for pins on a CompactFlash memory card 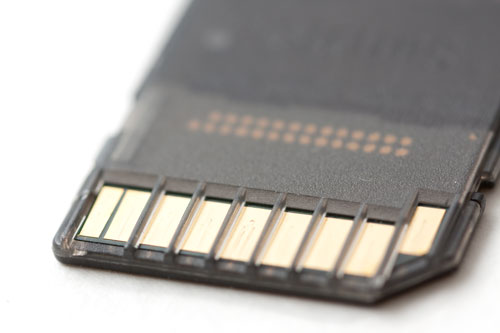 Contacts on an SD card

There can sometimes be problems with CompactFlash cards where a pin in the card slot of the camera can get bent. This is quite difficult to fix, and renders the camera unusable, since you cannot insert a memory card. This problem is quite rare, but it does seem to happen more often than contacts not touching properly in SD cards. 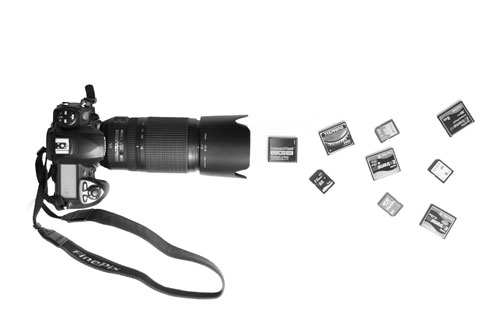 Faster cards are useful for a number of reasons:

There are a number of different ways that manufacturers indicate the speeds of their cards:

As you might be able to gather from the above, the way that manufacturers label their cards only gives you a general idea of how fast a card is. A class 8 SD card may have write speeds of 8MB/s, or it may write at 15MB/s. When comparing memory cards, it is good to look at independent reviews that show real performance for the cards.

Rob Galbraith did run a very useful memory card speed comparison database. This shows the speeds of a large range of different cards, tested with different cameras. Unfortunately this is no longer being updated, but it is still pretty much up to date at the moment. Searching the internet for 'SD card speed test', for example, will bring up other websites offering more current tests of cards' real performance.

Another reason why some cards cost more than others is down to the quality of materials and workmanship. While a cheap card from some unheard of manufacturer may seem like a great deal, it's not so great if the card becomes corrupted and you loose all the photos on the card. It's even worse if the card damages your camera (more likely to occur with CF cards than SD cards). 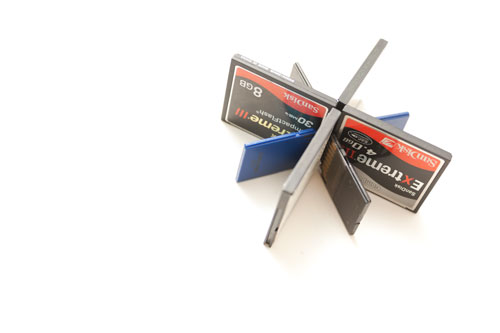 There aren't any tables (that I know of) listing the reliability of memory cards. So checking this is just down to reading reviews by other users of the card you are looking at. This should give you a good idea of whether there are potential problems with the card.

Sandisk and Lexar are the two main premium manufacturers of memory cards. Very few people report any trouble with their cards, other than the occasional compatibility issue from using a modern high capacity card in an old camera.

For example, it may be cheaper to buy 4 16GB cards than it is to buy 1 64GB card. There is also the issue of what happens if your memory card becomes corrupted or you loose it. If you only have one large memory card and you loose it, you have lost all your photos. If you have multiple smaller cards, you only loose the photos stored on that card, photos on the other cards will still be okay. 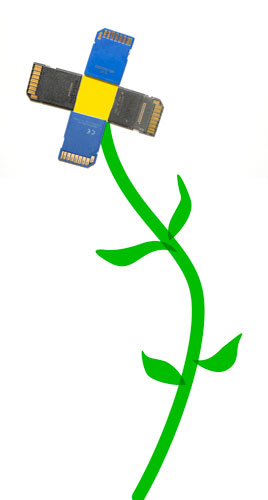 What capacity of memory card you should buy depends on your shooting habits. If you shoot a lot of video, then a high capacity (and fast speed) card is definitely a good choice. If you use RAW image format and like to take lots of photos, then again, it is a good idea to go for high capacity memory cards.

If you shoot in JPEG format, or don't take many photos when out on a shoot, then a smaller capacity memory card will suit you fine. The size of the card needed also depends on how many megapixels your camera has (if you set the camera to save images at full size). A 24MP camera will produce files about twice as large (sometimes more) than a 12MP camera.

If you are going on holiday and won't have access to a computer or laptop to copy your photos to, then buying high capacity cards for the trip makes sense.

I stated earlier that it is better to have multiple smaller memory cards than one large capacity card. When you fill up a card with images, it is best to 'mark' it somehow that it has been used. (So you don't try and use it again when the next card has been filled up).

This could be putting a rubber band round the card, putting it back into your card wallet face down, or using two card wallets - one for used cards and one for fresh cards.

As soon as you have finished shooting, it is a good idea to copy the photos from your memory card to your computer. This frees up space on the card for future shoots, and means that if something does go wrong with the card in the future, you don't loose a lot of old photos, just the photos from the current shoot.

When you have copied the photos from the card to your computer, check they have all copied okay and back them up. After this, format the memory card in the camera, so it is empty and ready to be used again next time you want to take some photos.

If something does go wrong with a memory card and you can't access the photos, there are numerous recovery programs you can try. These can sometimes recover images from a corrupted memory card. You can find plenty of different offerings by searching the internet. To start off you could try the free PC Inspector Smart Recovery.

As with most things, generally you get what you pay for with memory cards. More expensive cards tend to have faster speeds and be more reliable than cheaper cards. It always a good idea to read reviews of any card you are considering to make sure it will suit your needs.