How to photograph Dragonflies and Damselflies

Dragonflies and damselflies, with their bright colors and almost alien appearance, can make great subjects for photos. They can move incredibly quickly, and are often quite skittish, so are not the easiest of subjects. But in this article I'll share a few tips to help you get better Dragonfly and Damselfly photos. 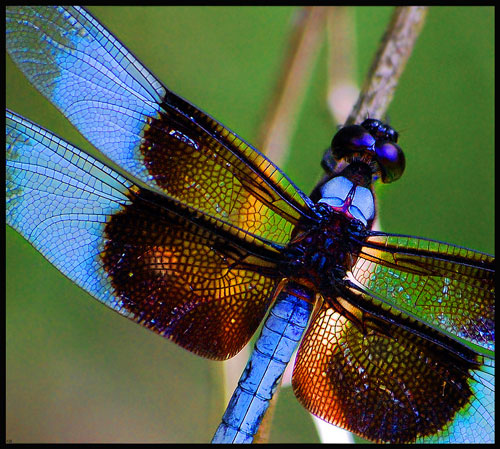 Where and when to find Dragonflies

Dragonflies and Damselflies spend most of their lives living underwater as nymphs. They live in fresh water, often preferring ponds and streams. After one to two years living underwater, the nymph climbs up out of the pond and onto a reed or piece of grass at the edge of the pond / river. The dragonfly then sheds its larval skin, and emerges as an adult dragonfly. 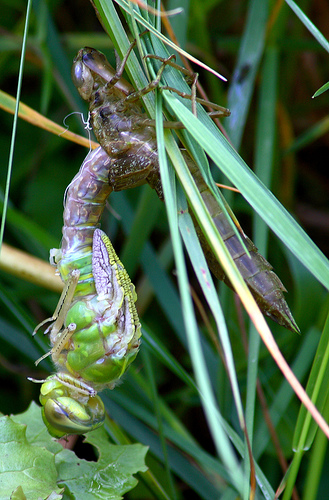 Typically dragonflies start to emerge around late Spring, finishing in late summer. Generally the water they live in needs to be quite warm before they decide to emerge, so if the weather is cold, you are less likely to find new hatchlings. In the autumn the frost kills the adult dragonflies off. Sometimes they can survive the first few ground frosts, but when it starts to get colder you won't see any more until next year.

The early morning can be a good time for photographing static dragonflies. Sometimes you might find one clinging to a reed near the side of a pond or lake. Insects are cold blooded and need the heat of the sun to warm up before they become active. So early in the morning they are less likely to fly away or move while you are photographing them. 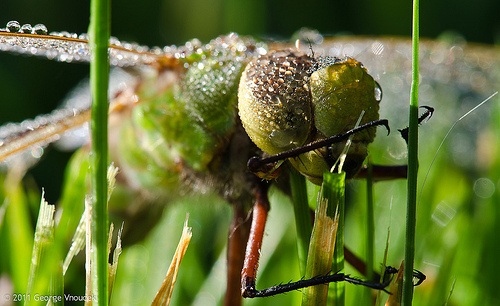 Quite early in the morning is also when you are most likely to see the adults emerging from the skins of their nymphal forms. This can make for some great photos in itself. But also, the dragonfly has to hang around while it first pumps up its wings, and then wait while the wings dry out. So this lets you get quite close without the dragonfly flying away.

For photographing dragonflies and damselflies, you really need a telephoto focal length. I would suggest a focal length of 50mm at an absolute minimum, and 100mm-200mm is preferable. If you have a camera with a built in zoom lens, then just make sure you zoom in when trying to photograph dragonflies. 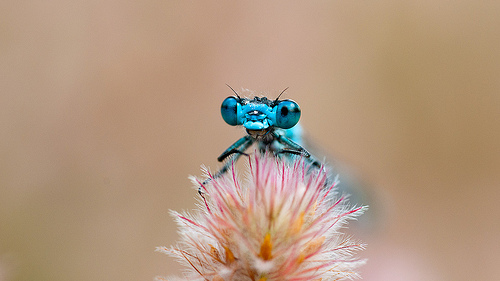 A wide-angle focal length isn't very useful because dragonflies are so small. For the dragonfly to appear a reasonable size in the image you would need to focus so close to the dragonfly that they would be practically touching the lens.

Lenses longer than 200mm can be used, but these lenses tend to be quite big and heavy. So they are not so comfortable to walk round with while you try to find a dragonfly or damselfly.

As well as using a telephoto lens, the lens must also be able to focus very closely. For interchangeable lens cameras, a macro lens is ideal. If you have a camera with a built-in lens, it may have a 'macro' mode. It is a good idea to test how well this works, as often the 'macro' mode just allows the lens to focus a bit closer than it can normally, which may still not be close enough.

For testing, I would suggest to try focusing on a small pencil. Different dragonflies are different sizes though. If you're after photos of a particular dragonfly (or you know that certain species of dragonflies are common where you will be photographing), then you can lookup the size of the dragonfly on the internet. Then just use a ruler for test photos to make sure your camera can focus close enough to get the shots you want.

If you have an existing camera / lens that can't focus close enough for a good dragonfly photo, you can make it focus closer in a couple of ways:

For taking natural light photographs of dragonflies and damselflies in the early morning, you will probably need a tripod. At that time of day the light level is still quite low, which requires a slow shutter speed (or high ISO). Using a tripod will let you use a low ISO and slow shutter speed without risking blurry images from camera shake.

Ronnie Gaubert was undoubtedly one of the masters of dragonfly photography, and he preferred natural light photos, often taken with a tripod. You can see a gallery of Ronnie's dragonfly photos here: IT'S A SMALL WORLD by Ronnie Gaubert 》 THE Odonate Of Louisiana (dragonflies).

We've already one technique for photographing dragonflies - get there early in the morning and use a tripod for natural light shots. But sometimes you might want to photograph dragonflies later in the day when they are active, or maybe you want to try and catch one in flight. 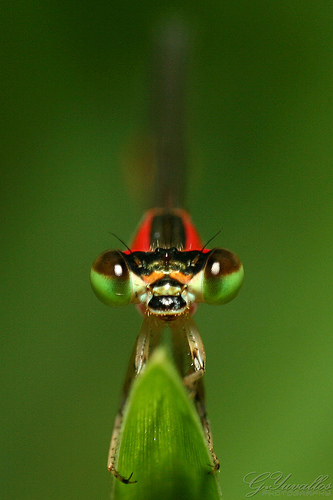 Dragonflies often have a territory that they will patrol. Observing their activity for a while can help you get a better photo. You will probably see that the dragonfly follows a set pattern of patrols. This can help you predict where a dragonfly will fly if you want to get shots of it in flight.

For capturing a dragonfly in flight, make sure that your camera is in continuous autofocus mode, or use manual focus. Try and follow the path of the dragonfly with your camera as it flies past you. Or, look for a spot where it will hover on each patrol. This can be very tricky, but will be easier if you have studied its flight patterns and have an idea where it will go. 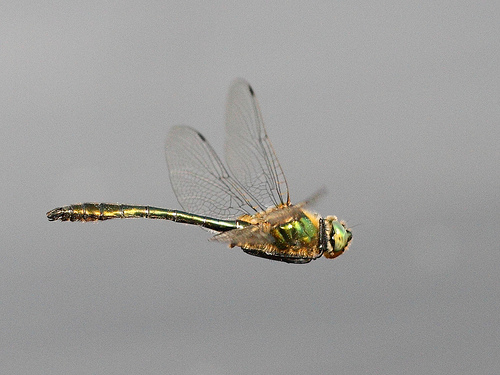 Just as dragonflies have a set patrol route, they often have a preferred perch (or perches). If you can see the dragonfly keeps landing on a certain perch, move next to the perch the next time the dragonfly is patrolling. Hopefully it will come back to the same perch, with you right next to it, ready to take its photo.

When photographing a Dragonfly or Damselfly (or most insects really), it is important to make very slow movements. If you make a fast movement, the Dragonfly will probably view you as a potential threat and fly off. 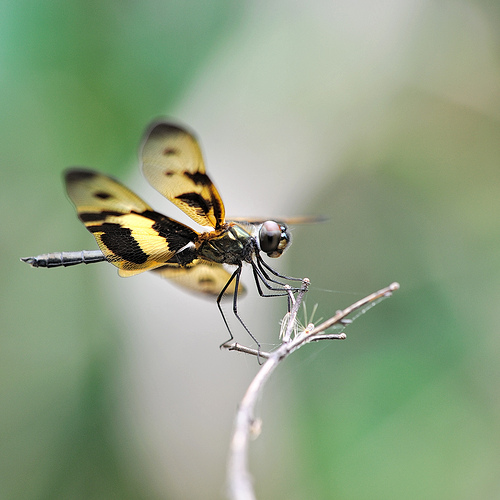 Remember that you also need to move the camera very slowly. If you sneak up slowly on a Dragonfly, then quickly bring the camera up to your face, your sneaking will have been a waste of time. However, all is not lost. Be patient and the Dragonfly may well land on that perch again.

Dragonflies and Damselflies aren't the easiest insects to photograph, but their bright colors make them a great subject for photos. If you have some freshwater nearby, try capturing some shots of these fantastic creatures.

One Response to “How to photograph Dragonflies and Damselflies”