How to Photograph Clouds

Interesting clouds can make all the difference to a great landscape photo. But have you ever thought about making the clouds your main subject?

Clouds come in a wide variety of types, and are always shifting and moving. You don't need to travel to get nice cloud shots. You can take cloud photos from the same location at the same time every day, and still end up with a good varied selection of shots. 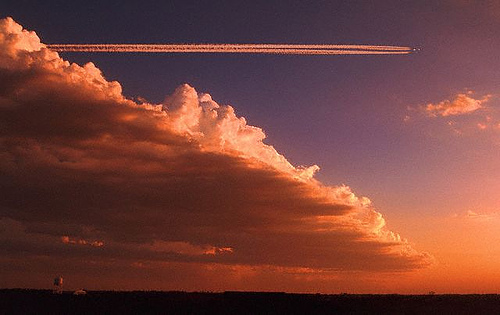 When photographing clouds, try not to clip the white highlights of the clouds to pure white. Most cameras have a highlight clipping warning option that will blink black where highlights have been blown out. You can use this to check whether the image is overexposed. If so, dial in some negative exposure compensation and take another shot.

Cloud photos can often benefit from some small adjustments in Photoshop or similar software. Darkening the image and increasing the contrast can have a marked improvement. 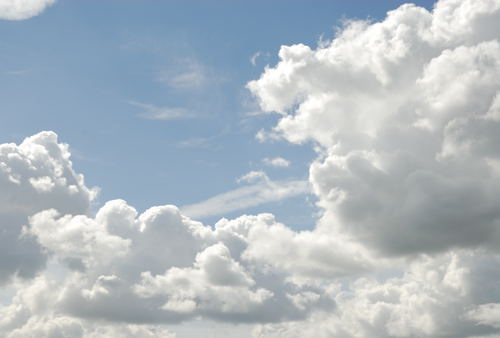 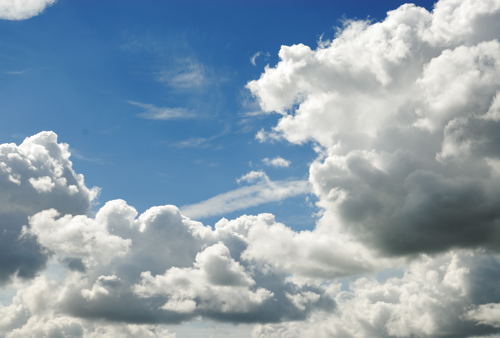 For the above photo I decreased the exposure by -0.2 and used a strong curves adjustment to increase the contrast. See Using the curves tool in Photoshop etc. to improve your photos for more information on how to use curves to alter the contrast of an image.

Adjustments made to the edited clouds image above

You can replicate a similar effect in-camera by underexposing the image. In the image settings alter the contrast setting to the strongest level. This should give similar results to the adjustment above, although you don't have as much control over the adjustment when doing it in camera.

If you are going for a softer pastel look (more suited to wispy clouds), then you are probably better to leave the image as it is.

If you are lucky, you can sometimes catch a fantastic scene when clouds are lit up from below at sunset. Occasionally a large amount of cloud will cover the sky, but the cloud will end near the horizon. When the sun dips down to the horizon, it will light the underside of the cloud with a warm orange glow. 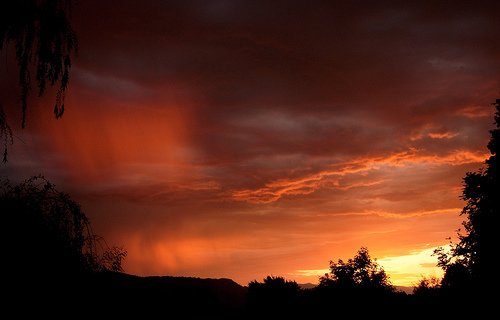 The contrast between the orange glow and the rest of the dark cloud works really well. This sort of sunset scene is most likely to occur shortly after or during a rainstorm, so it is not easy to capture.

Add some pop to clouds with a polarizer

To give some 'pop' to your cloud photos, a polarizing filter can often work wonders. It works best at an angle of 90° to the sun. If you are shooting directly into the sun, or in the opposite direction of the sun, then it will have little to no effect.

A polarizer darkens the sky and reduces reflections. This darkening of the sky really helps white clouds pop out against a blue sky.

Using a polarizer does result in some light loss though. So make your camera's shutter speed is fast enough to avoid a blurry image when using a polarizer. For more information on polarizing filters, see this post: Polarising filters.

The look of clouds can also be changed quite dramatically by using a long exposure. Clouds that normally have a strong shape and form can be stretched out, really showing their movement in a still photograph. 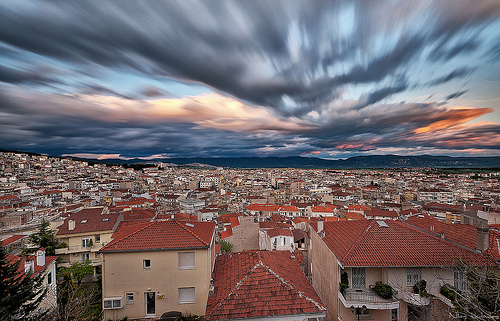 This works best around twilight, when the light level is quite low, so you can get a long exposure easily. You will need to shoot on a reasonably windy day as well, otherwise the movement in the clouds will be too small. For the photo above, the photographer used a shutter speed of 30 seconds.

Clouds from the air

If you get a chance, taking photos of clouds from above can make for some great shots. The view of clouds with a blue sky above them, rather than below them, makes for very different photos than you can take from the ground. 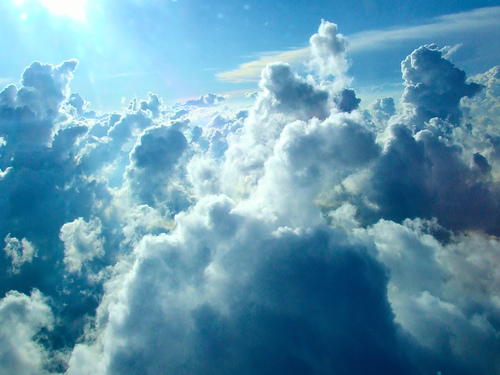 When shooting through a plane window, try and use a rubber hood on the camera / lens, pressing it right up against the window. You want to minimize any reflections from the window glass. Don't use a polarizing filter unless you want to capture the birefringent property of the airplane window. (You'll see light split into colors like a rainbow effect).

So next time you are out on a cloudy day, don't forget to look up. Clouds can make for beautiful abstract compositions by themselves, as well as adding to the wonder of a landscape.

Improve your photos by including less Stuck in a photography rut? – How to clear photographer’s block