What to look for when buying a Speedlight Flash: Size, weight, and usability

In recent years many photographers have decided to try and cut their kit down to a smaller and lighter selection of gear that doesn't give them a bad back after a full day shooting. This smaller and lighter mantra can extend to the choice of speedlight as well.

However, what you give up in terms of weight and size with a smaller speedlight, you are also likely to give up in terms of power and ease of use. But with good high ISO capabilities on modern cameras, a low power flash is not as big a problem as it used to be.

In this article we look at the size, weight, number of batteries a flash takes, and the usability of flash units, to help you decide which features are most important to you. 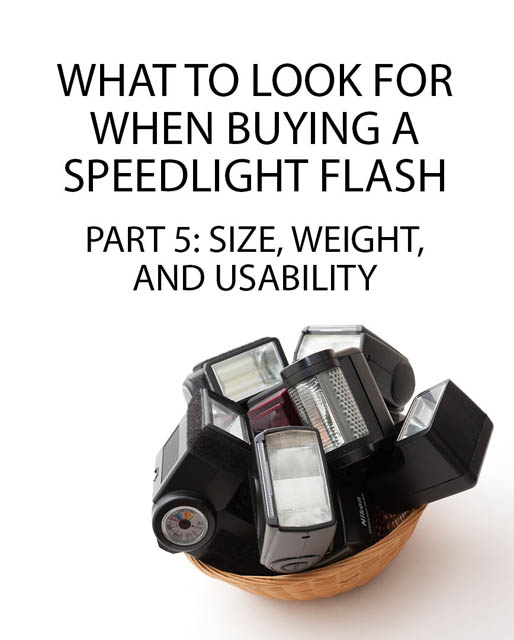 If you plan on using your speedlight(s) mainly in a studio, or on location where you don't have to transport them far from the car, then the size and weight of the flash aren't much of an issue.

On the other hand, if you're looking for a flash to accompany a small and lightweight camera, or to use on a bracket for macro / close-up photography, then size and weight are much more of an issue.

Speedlights come in a large range of different sizes. Some units are very small, designed to be a basic flash solution for cameras lacking a pop-up flash. Slightly larger but still small flashes are available for those wanting something they can fit in a pocket but get more power or flexibility from than a pop-up flash. Still others are a medium-small size, offering a trade-off between the maximum flash power, size, and cost. 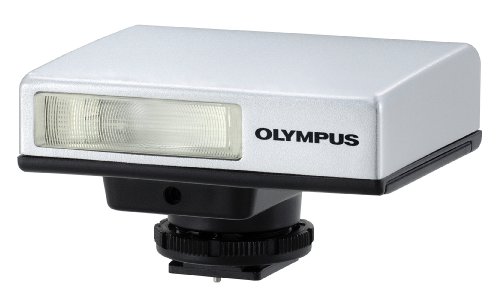 Olympus FL-14 Flash, an example of a very small flash.

The majority of speedlights though are a medium size, balancing well on most DSLR cameras. And light enough to use on lightweight lighting stands without needing sandbags to keep the stand weighed down (except in wind).

You can also purchase some larger heavier speedlights, which output a lot of power, and typically come with a separate battery pack. A kind of half-way house between your typical speedlight and a studio strobe. 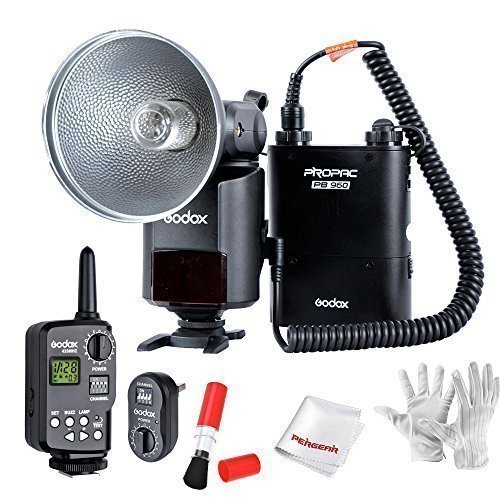 The Godox Witstro is an example of a larger flash, especially when the battery pack is taken into account.

For most photographers, the standard sized speedlights will be fine. But you should definitely think about how you intend to use the speedlight, and what kind of weight and size would be suitable for that work before you decide which speedlight to purchase.

Tying in with the last point, the number of batteries a speedlight takes affects the flash's weight. A medium-small flash that takes 2 AA batteries will be lighter than a similarly sized model that takes 4 batteries. If you plan on using the flash in a situation where weight can be an issue (such as on the end of a macro flash bracket), then just a small amount of extra weight can make quite a big difference. 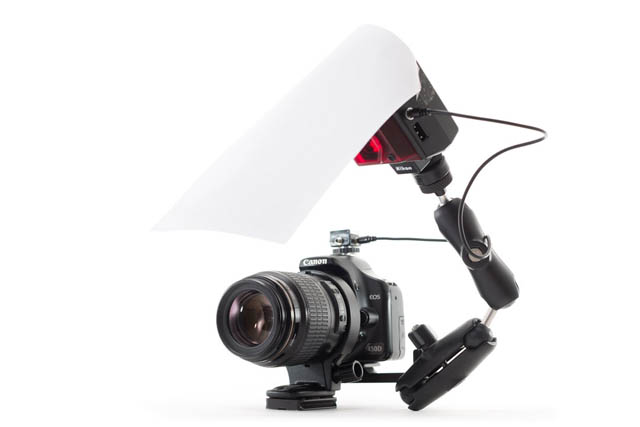 Weight becomes much more of an issue where the flash is not centered over the camera. Using a small 2 battery powered speedlight can make sense when using a macro flash bracket for handheld close-up photography.

The number of batteries should also be considered in terms of ease of use. You may find a speedlight that takes four batteries, then has an extra battery holder that can clip on to the battery chamber, in order to provide faster recycling times. If this battery holder takes a single AA battery, this gives you 5 batteries. Batteries are usually sold in packs / multiples of 4, and most chargers only have space for 4 batteries. 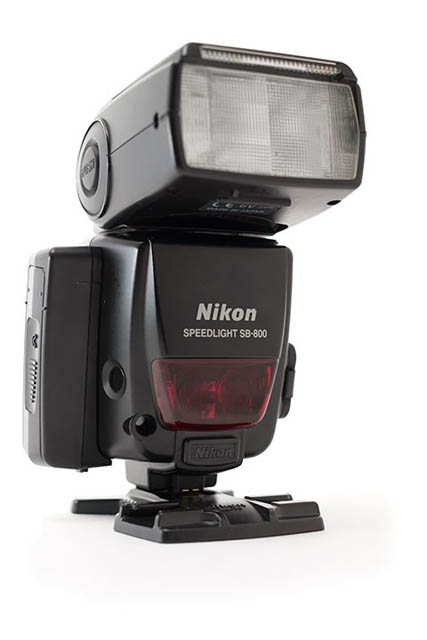 Some high power flashes may come with an external battery pack, or have one available as an accessory. These typically take 8 AA batteries, and so are quite sensible in terms of battery use. Having to carry the battery pack around with you can be inconvenient compared to a flash that is just using batteries inserted into the body as normal though.

Very small speedlights often have no controls, meaning they can only be controlled through the camera menus. While not a big problem for on-camera use, it can become more problematic for off-camera use, or if you want to use the flash with a camera model from a different manufacturer. 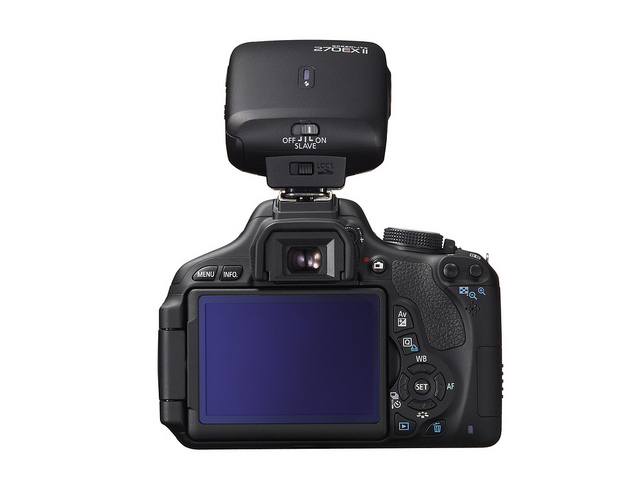 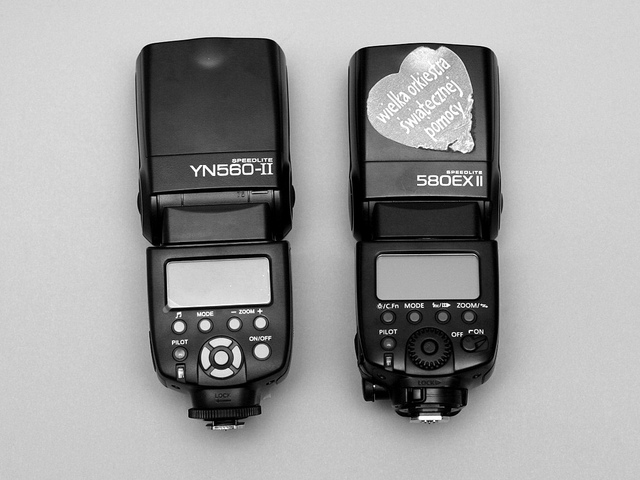 If you need to work quickly, then being able to directly change settings on the flash itself makes life much easier. Being able to quickly glance at the LCD on the flash and see all the current settings is also a great help.

For slower work, these features can still be useful, but are far from essential. It might take several button presses to decrease the flash exposure by 2/3 stop on a cheap speedlight compared to just two quick button presses on a more expensive model. But it doesn't really matter if there's no urgency to getting the shot.

Depending on your uses, you may decide that you're best off getting both a very small flash (particularly if your camera has no built-in flash), and a larger flash as well. This lets you choose the best flash for the job. And it also gives you the option of using two flashes when you want to get more creative with your lighting setups.

In the next article on choosing a speedlight flashgun, we'll look at off-camera use in more depth. We'll cover the different methods flashes may include to allow their use off camera, looking at the benefits and disadvantages of each method.