Urban Landscape Photography involves capturing the buildings and structures in our towns and cities. Because most of us live in towns or cities, it is a much closer subject to deal with than traveling out to the countryside for some traditional landscape photography.

Although photographing gray concrete buildings might not sound appealing compared to being out in the country, urban landscape photography can produce some fantastic photos.

You want to look at the lighting and shadows on your subject(s) to determine when the best time to photograph them is. With buildings on different streets facing in different directions, one set of buildings may have the best lighting at 12 noon, while another may look better at 3pm in the afternoon.

As you walk around you should make notes on possible locations for a good photo, and what sort of time they are likely to look best. Don't forget also, that the actual landscape will change with time e.g. signs outside shops will only be there during opening hours, flats with washing hanging across the balconies won't have the washing hanging there all day.

With the way buildings are constructed in regular, uniform way, it can be quite easy to find patterns to include in your compositions. 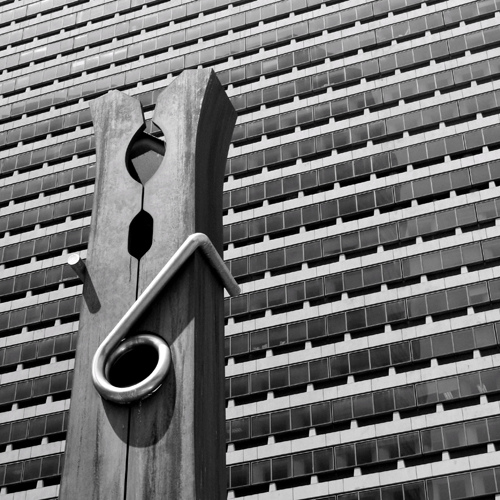 Although you're unlikely to find a circular shaped building, some builings are created with curves, while others are very flat and angular. Use the lines of the building edges in your photos as part of the composition.

In the photo below the wavy building acts a converging line to draw your attention towards the center of the photo. The buildings all meet at a point around the bottom right of the image, as per the rule of thirds. 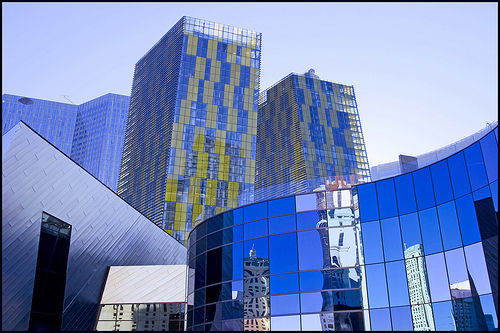 Look for contrasts between shape, color, size, age, well kept buildings and run down buildings, architectural styles, etc. These contrasts can be found quite easily in most cities.

A good example of color contrast could be one brightly painted building amongst a group of much more drab colored buildings. Or the warm early morning / late afternoon light on a brick building compared to the cool blue sky reflected from a glass and steel building. 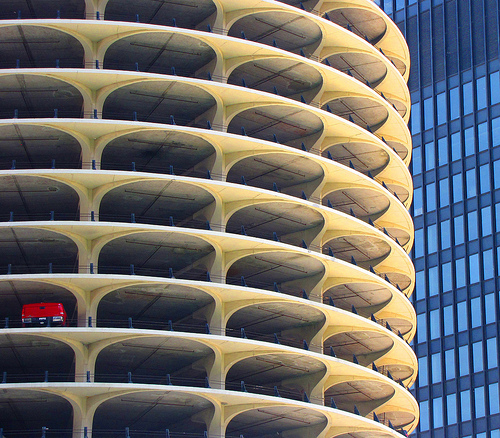 Buildings of different ages and architectural styles make a good contrast. You are more likely to find these in cities with a long heritage than new towns, but even in a new town there may well be buildings built in contrasting styles right next to each other. 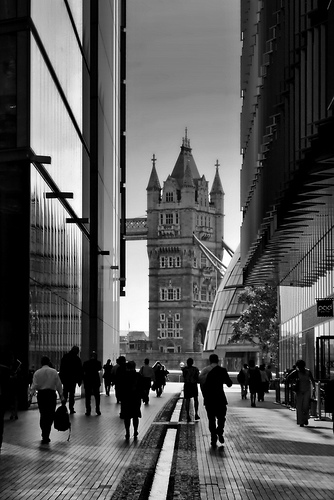 The majority of urban landscape photos tend not to include people. This is because it is easy for the people to become the subject rather than the landscape.

Of course, not every urban landscape photo is devoid of people. If the inclusion of people adds to the shot, or at least does not detract from it, there is no harm in including them. 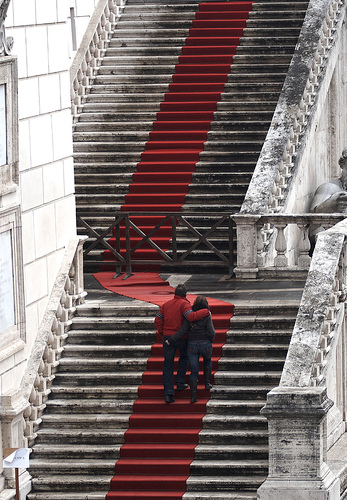 If you do have a scene where you think it would be better without the people, you could try coming back at a time when you think it will be less busy. Another solution is to use a very slow shutter speed. Shooting at night, or using a strong neutral density filter can allow this. With a slow shutter speed, moving people blur away into nothingness.

Don't pack up at night

Although it can be tempting to pack up when the light starts to wane, urban landscapes can look great at night. Unlike natural landscapes, where you only have the light of the moon and stars, urban landscapes are filled with artifical light. The lighting in towns and cities is often numerous colors as tungsten, flourescent, and neon lights clash together. 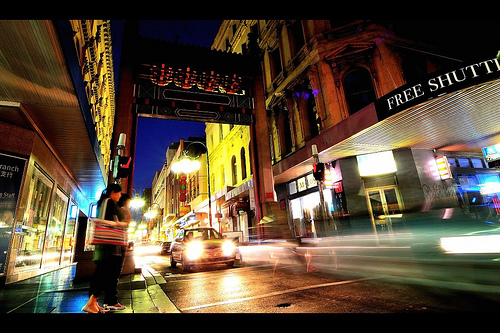 Shooting at night is particularly good on wet days, where you can get some great reflections on wet roads and surfaces. Depending on where you are shooting, you will probably want to use a tripod or monopod to steady the camera. If you're shooting in a busy area, bear in mind that a tripod might get in people's way too much.

With the heavy use of glass in buildings, there are reflective surfaces all around you. There are a few different ways reflections can be used: