Close-up images of insects can be fascinating. They often have an other-worldy look about them, as we are not used to seeing them so large.

There are millions of different species of insects, and they are all around us. But unfortunately this does not mean they are easy to photograph! In this article I'll share a few tips to help you get better insect photos. 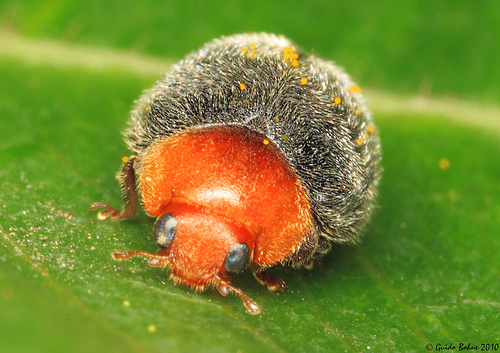 First off, you will need a camera / lens that is capable of the magnification needed for capturing a small insect. Many compact cameras feature a macro mode, often this may be good enough for dragonflies and larger insects, but not so good for smaller insects.

If your camera / lens can't focus close enough for good insect photos, then all is not lost. For advanced compact cameras that have a filter thread on the front of the lens, and interchangeable lens cameras, you can use a diopter lens.

A close-up diopter lens screws onto the filter threads of your current lens and allows it to focus much closer. Popular models are the Raynox DCR-250 for compact and superzoom cameras, and the Canon 500D for interchangeable lens cameras. 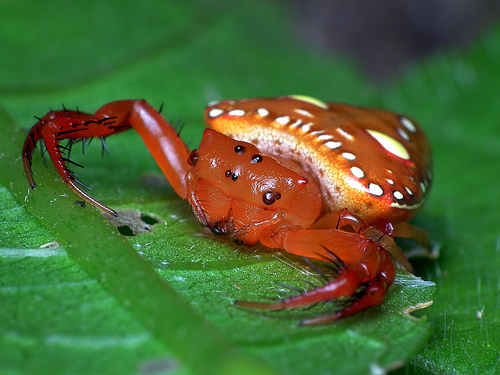 For interchangeable lens cameras there are also numerous other ways to get good close-ups of insects - bellows, extension tubes, reversed lenses, and macro lenses. But you certainly don't need an expensive DSLR and specialist macro lens to get great insect photos.

Secondly, working so closely to the subject, the amount of light can often be a problem. It is not essential, but you will likely find either a tripod or a flash useful.

A tripod can be used when your subject is still. It will keep the camera steady during the exposure and prevent camera shake that you often get when hand holding the camera.

A flash is better for freezing moving subjects and allowing a fast shutter speed. You will likely need to use a flash bracket to get the flash nearer the subject. Or you can construct some sort of home-made flash diffuser / bouncer that directs the light from the flash onto your subject.

Some insects, such as bees and butterflies, are quite easy to spot, since you can see them flying about. But if you take a look at a patch of ground or a bush, it might look like there aren't any insects there.

However, if you just sit and watch carefully, you often see small beetles or bugs moving about on the leaves. You might see a fly or wasp landing as well. Being still and sitting next to a flowering plant is a great way to let insects get close to you, without you having to chase after them.

Some insects are territorial. If you try to move close to them but inadvertently scare them off, it can pay to just stay still where you are. Often the insect will come back. 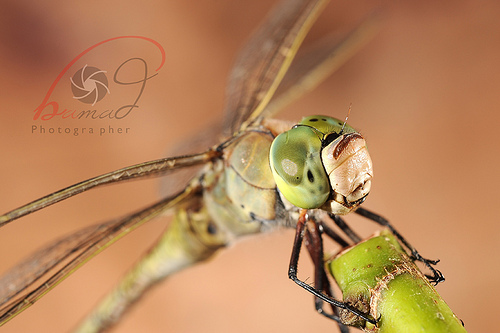 Where to look for insects 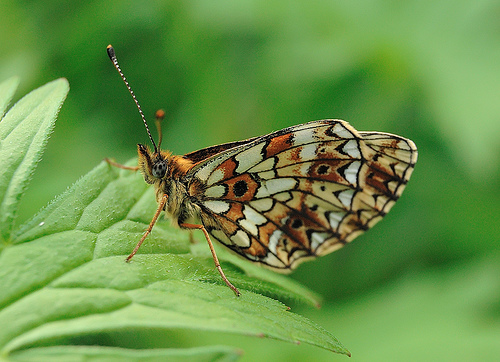 If you are just after photos of insects in general, the edges of woodland, and areas near water can be very rich in insect wildlife. Flowering meadows are great for insects that like nectar, such as butterflies, bees, and some beetles.

In the early evening, grass meadows are often full of grass moths. If you see leaves that look ill or partly eaten, check the underside of the leaf, and other leaves further into the plant. You'll sometimes find a caterpillar or other insect munching on the leaf underneath. 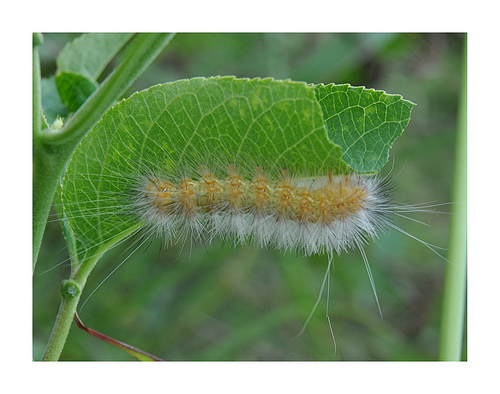 In winter you won't find too many insects outside (though some do seem to come out on warm winter days). Inside your house you can probably find plenty of spiders though. And in a garden shed or outbuilding you might find hibernating butterflies and clusters of ladybugs. Be careful not to disturb hibernating insects though.

When you see an insect, it is generally not a good idea to rush up to it to try and get a shot before it moves away. Often moving too quickly is what will scare the insect away.

Instead move very slowly. This includes bringing the camera up to your eye very slowly when you get near the subject. Be careful not to disturb any foliage around the insect. They are quite sensitive to vibrations, and may fly off or run away. 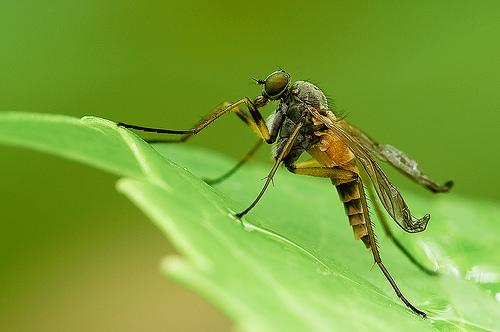 Pay attention to where your shadow is falling. Try to position yourself so that your shadow will not fall on the insect. The move from sun to shadow can be enough to scare off many insects.

If an insect is busy, for example feeding or mating, then you have a better chance of getting near it without disturbing it. 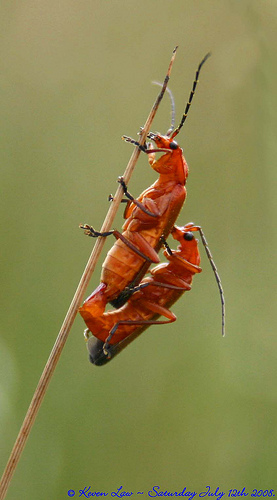 Insects are cold blooded and rely on the sun to warm them up before they can move about too much. You can take advantage of this by getting out early and catching them before or just as the sun comes up, while they are still lethargic. 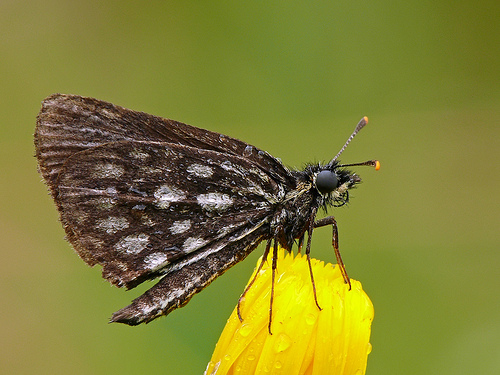 Because insects aren't moving much (often they won't be moving at all) at this time of day, it can be great for natural light shots. The soft warm light of sunrise gives a much nicer image than the harsher light of midday. And wind is generally less in the morning as well.

So once you've found an insect, you can set up a tripod and your camera, carefully consider the composition, and then grab a great shot.

One of the benefits of getting out early and using natural light is that you get a well lit background for your shot. If you're shooting with flash, you'll often find that flash fall-off results in an image with a black (or very dark) background, looking like it was taken at night. 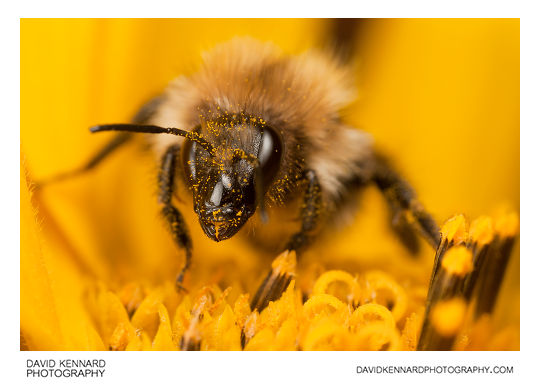 Sometimes shots with black backgrounds can look very good, but generally those with a brighter and more natural looking background are preferable. If you're shooting with flash, you can get a brighter background just by making sure that there isn't a large distance between the subject and the background. Just holding a leaf behind your subject as the background can work well.

With macro, moving the camera just a small amount can often result in quite a difference in the background. Look for colors that work well with your subject.

Shoot from the insect's perspective

If you only take shots of insects looking down on them from above, you'll find your shots look a bit boring. Instead, get down on eye level with the insect (if possible). 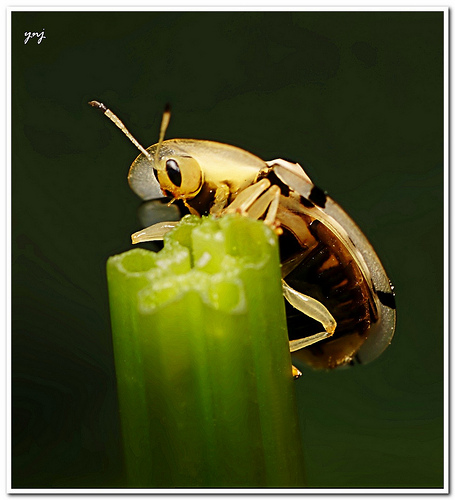 Where an insect is perched on a twig, blade of grass, or leaf, you may be able to rotate their perch. This way the insect becomes on eye level with you, without you having to lie on the ground to get the shot.

Macro photography of insects can be frustrating as it is difficult to get the focus, depth of field, insect pose, and background all spot on. But when you do get them right, the great images are really rewarding.

Stuck in a photography rut? – How to clear photographer’s block Why calibrate your monitor?