If it's raining, it can be very tempting to stay inside rather than go out and take some photos. Who wants to take photos in the rain anyway?

Well, actually, photographing in the rain can produce some great photos. One of the reasons rainy photos can seem so striking is just because we are not used to seeing photos taken in the rain. 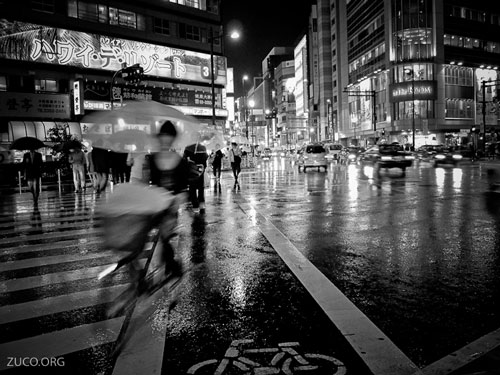 Most things, but particularly stones and brickwork, appear much more colorful when wet than when dry. The rain really brings out the saturation in the colors. 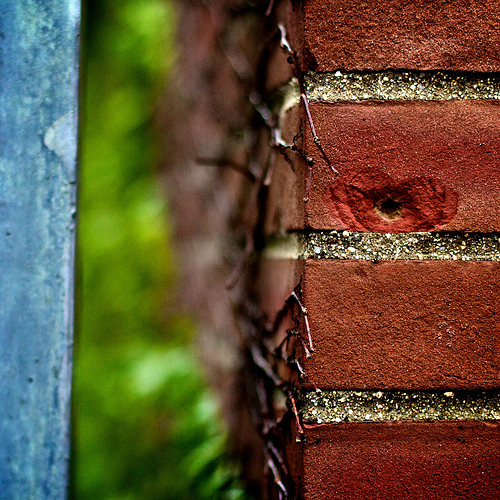 Raindrops on the window

A subject that you can find on a rainy day without even having to go outside is raindrops on the window. By themselves, the droplets can make for some great abstract patterns. If you have some out of focus light sources behind the window, this can create a great 'bokeh' effect. 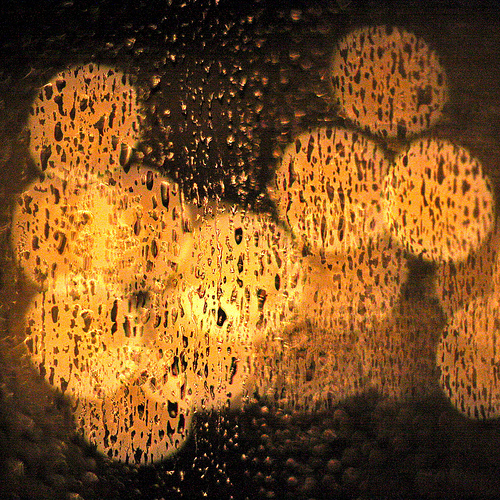 Shooting through a rain drop covered window towards a subject can also create an interesting photo. It gives a sense of separation, between the viewer on one side of the window, and the subject on the other. 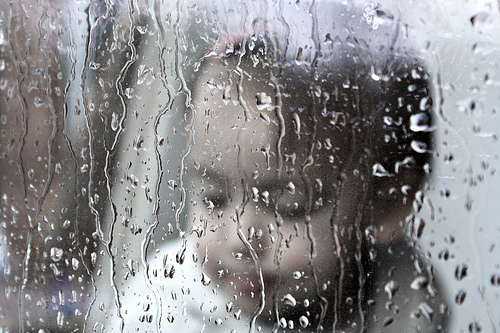 Tips for photographing the rain

To actually capture the falling raindrops, you need to make sure they are lit well. One option is using a small amount of flash to capture the photo. The flash hits the raindrops and reflects back, capturing them nicely. 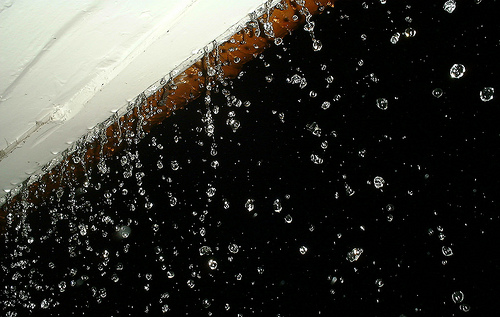 This works best if the background behind the raindrops is quite dark. For a natural light photograph, where flash is not the main light source, dial the power down on the flash. Most cameras have a flash exposure compensation option that lets you reduce the flash strength. This should still give enough light to highlight the raindrops, but not enough to overpower the photo and make it look like a typical flash photo.

Another (often better) option, is to try and photograph the rain so that it is backlit. Backlighting the rain brings out more definition and makes the falling rain easier to see. 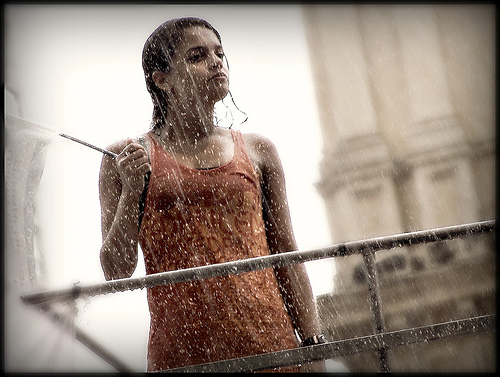 If the rain is just from a quick storm passing through, and the sun is still shining from beyond the edge of the storm, then this will work very well. Alternatively, look for artificial lights, e.g. street lights that can be used to back or side-light the rain. 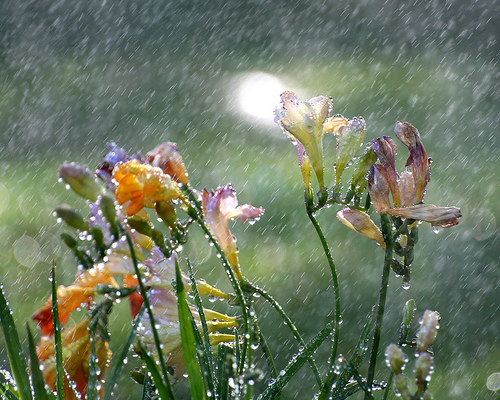 While a slower shutter speed e.g. 1/30s will capture much longer streaks. If you drop your shutter speed down too low though, you will find that the falling rain becomes so blurred that the streaks are no longer visible.

Showing the effects of the rain

If you can't get the rain backlit, and don't want to use flash to highlight the rain, then capturing the streaking rain will be difficult. But you can still show the effects of the rain, for example raindrops splashing in puddles. 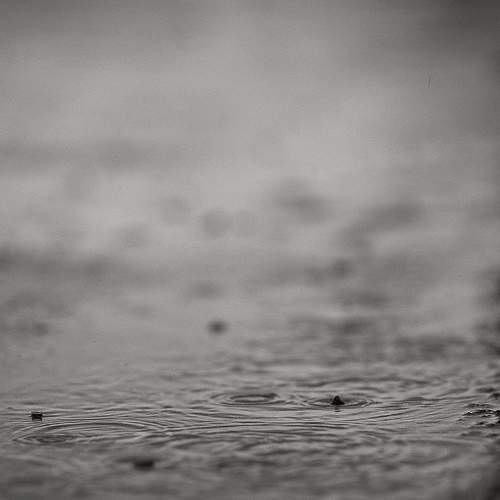 People carrying umbrellas are another interesting subject. One that you can only capture when it is raining. Brightly colored umbrellas contrasting against dark wet tarmac can work particularly well. Also try capturing some scenes where there are lots of people using umbrellas. 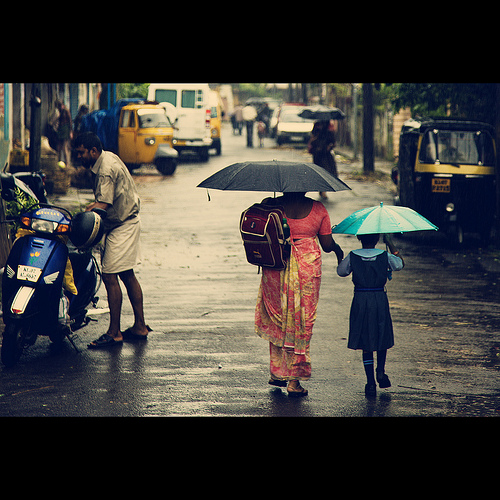 As well as the change in the way that people dress when it is raining, try capturing the change in emotions. For example, a disgruntled commuter who forgot to bring an umbrella or rain jacket. Or children happily splashing about in puddles. 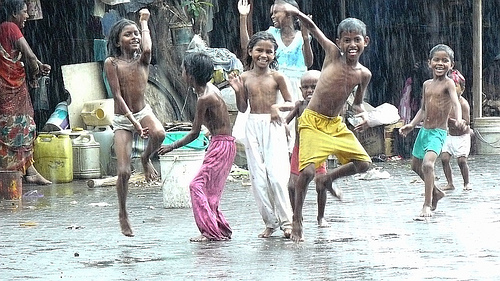 Look out for how places change in the rain. Outdoor areas such as street seating for a cafe can go from being very busy in the sun, to completely empty in the rain. Indoor places can suddenly become busy as people try to shelter from the rain. 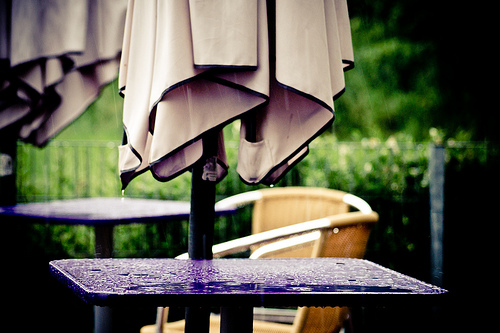 Wet roads and pavements can be great for capturing colorful reflections in. For this you don't need to go out when it is actually raining, you can wait until after the rain has finished. 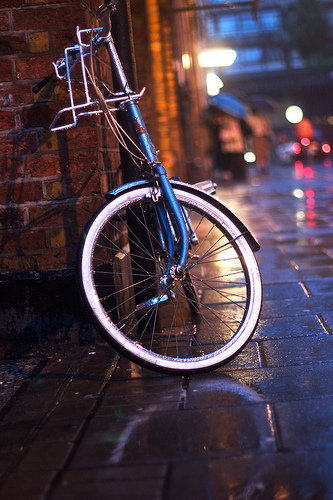 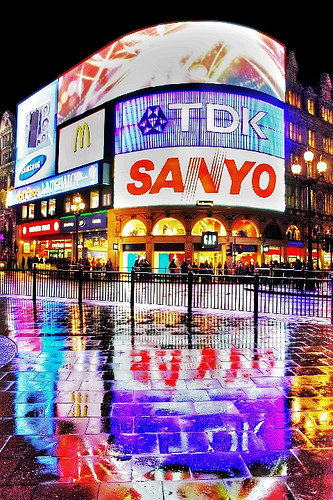 Edge of the storm

If you have just a brief storm blowing over, you may be able to get some fantastic photos as the storm arrives and leaves. This is especially true if the storm occurs around sunset. Look out for areas where the sunlight breaks through the clouds, giving a strong contrast between the areas that are lit and those that are in shadow. 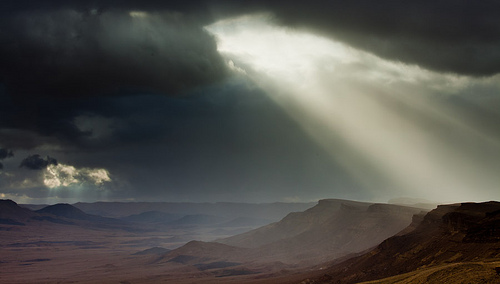 Other things to look out for are heavy rainstorms in the distance. And rainbows can often be found around the edge of a storm. Both can make for great and relatively unusual photos. 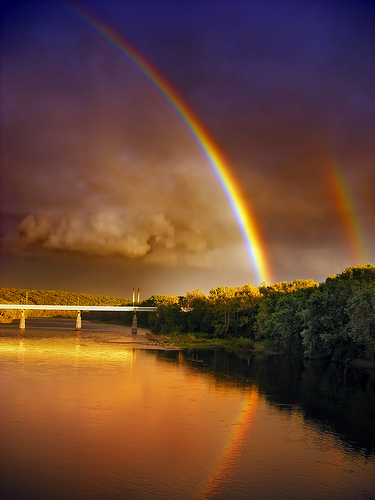 Occasionally you may get lightning during a rainstorm. If you can capture it, it can make for a great photo. The difficulty is that you cannot predict where lighting will appear, or when it will appear. 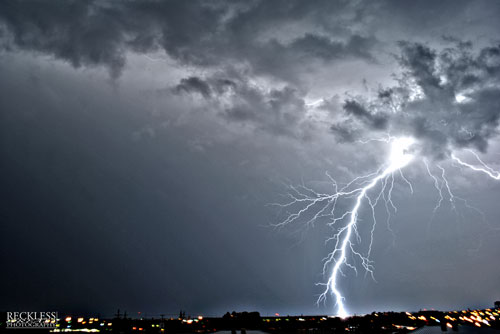 Then take the photo, and hope that the lightning will strike while you have the shutter open. Because the lightning is so bright, it will be recorded in the photo even though it only appeared for a split second of the full exposure. 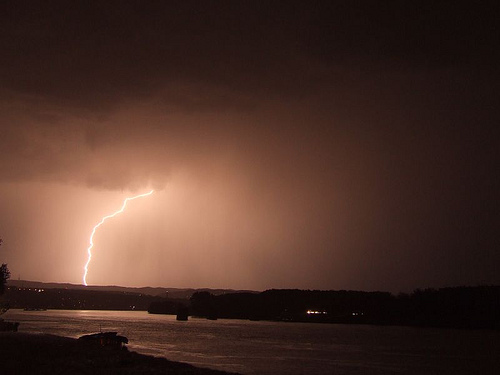 If lightning doesn't strike during the photo, just keeping taking more long exposure photos until you get lucky. Using a wide-angle lens to capture a wide area is a good idea as well. Then you don't have to worry so much about guessing the exact area where the lightning will strike.

Although you can go out and photograph plants and insects during the rain, I would suggest it's better to photograph them shortly after the rain finishes. There are a few benefits of photographing these subjects shortly after rain.

As discussed at the start of this article, the color saturation is likely to be higher when plants are wet, making for more striking and colorful photos. Plants covered in water drops, and also water drops hanging from leaves or flowers can both make for great subjects as well. 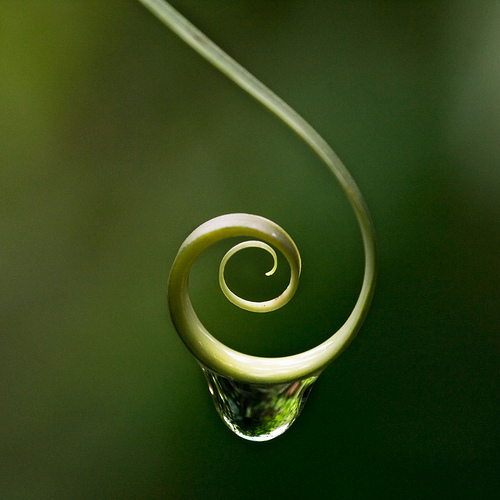 Cloudy skies produce a much softer light than direct sun. The result is images with softer shadows and a lack of harsh highlights. Shooting close-ups in cloudy conditions can also result in images with brighter and more colorful backgrounds. (There is a smaller difference in the intensity of light between the subject and a background in shadow if the subject is not lit brightly by direct sunlight).

Insects can also be an interesting subject to shoot after it has rained. You can sometimes find wet bees clinging to flowers, where they have had to stay during the rain. Because they are wet and cold, they won't move about much, making them much easier to focus on and get a good shot of. 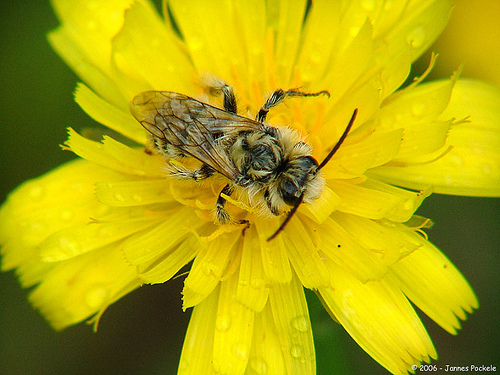 Furry insects, such as bees, can look quite different when they are wet. Don't worry too much about them, as they soon dry off and get going again when the sun comes out. Just be aware that if you put your hand too close to them, they may climb up onto your hand to take advantage of the warmth.

I hope this article has given you some inspiration to get out there and take some photos next time it rains. In a few days I'll post the follow up article, which will feature some more tips, mainly focusing on how to keep your gear from getting wet in the rain.

Photoshop tutorial: How to apply a texture to a face by using a displacement map Tips for shooting on rainy days