If you are considering purchasing a camera that accepts interchangeable lenses, you need to be aware of compatibility issues. Buying a camera and lens and then finding they don't work properly together could be quite annoying.

It is also important to remember that when you buy into a camera that offers interchangeable lenses, you are buying into a system. So you need to consider carefully the range of lenses available in that system.

In this article we'll look at the different compatibility issues you might come across, and also how some cameras can be used with a wider range of lenses via adapters.

The first thing to note is that each camera manufacturer typically has their own lens mount that they use on their cameras.

Here are the main lens mount systems used by the different manufacturers:

You can't use a lens designed for one lens mount on a different lens mount as the lens just won't fit. E.g. you can't use a Canon lens on a Nikon camera. Sometimes an a adapter can be used, but we'll look at this later.

Each camera manufacturer typically produces lenses designed only for their own lens mounts. There are also a number of third party manufacturers who produce lenses for a variety of mounts. The main lens manufacturers are Sigma, Tokina, and Tamron.

Although these manufacturers produce lenses in multiple mounts, the mount on the lens is not interchangeable. So you can't buy a Sigma lens designed for use with Canon EF mount and then use it on a Nikon F mount camera. Instead you'd need to buy the Nikon F mount version of the lens.

It is also worth noting that manufacturers can license a lens mount. For example, Fuji produced several DSLR cameras that used the Nikon F mount. And Kodak produced a couple of cameras that were available in both Canon EF and Nikon F mount versions.

Anatomy of a lens mount 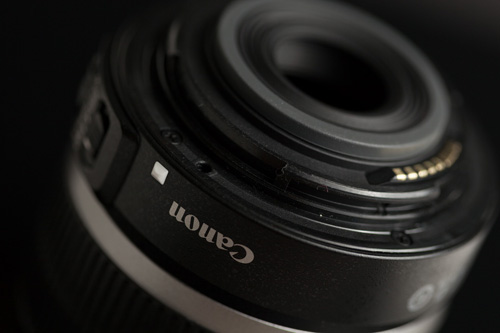 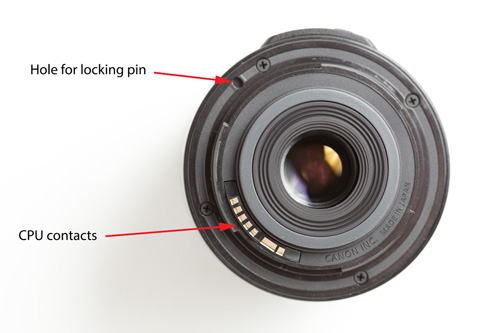 Rear of a Canon EF-S lens 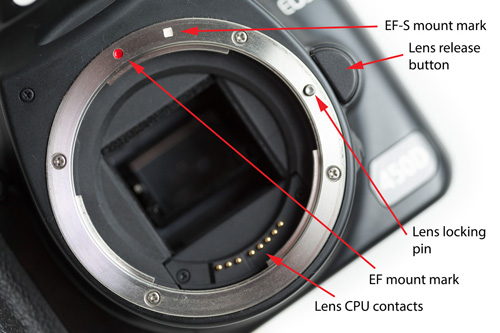 Nikon meanwhile uses a combination electronic and mechanical mount. Below you can see a Nikon F mount lens and the F mount on the camera. 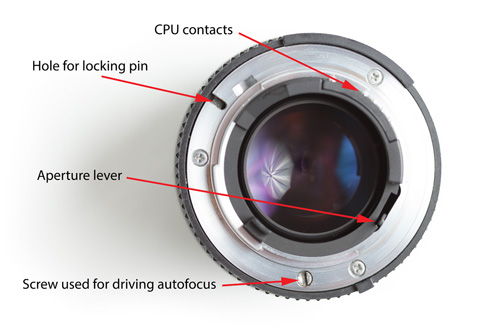 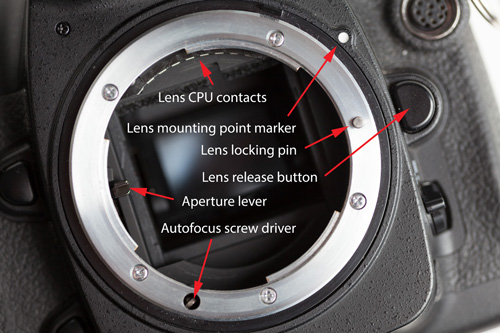 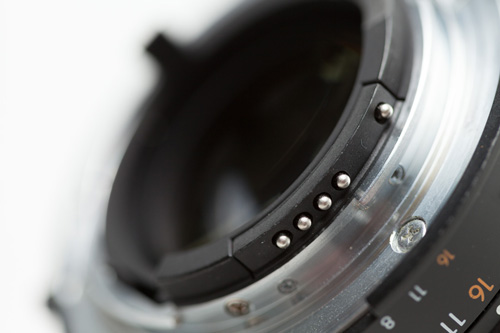 The number and placement of CPU contacts varies between each type of lens mount. Also, the signals sent through the contacts is different.

Mechanical mounts like the Nikon F mount often have an aperture lever. This is to allow controlling the aperture of the lens from the camera. Electronic mounts still allow this, just the control is done via sending an electrical signal to the lens rather than mechanically.

Some mechanical mounts feature a screw drive motor used for autofocusing the lens. (See section below on Autofocus motors for more information). In the Nikon F mount photo, the camera was set to manual focus, and so the "screw driver" is recessed in the body, in autofocus mode it would pop out.

The "screw driver" is spring loaded, so you can mount lenses without it scratching the mount as you rotate the lens to lock it in place. On the lens you can see the corresponding "screw" that the "screw driver" slots into.

Another thing to note is that the camera manufacturers also produce different versions of their lenses and lens mounts that are not fully compatible with each other.

The four thirds, micro four thirds, Nikon CX, Sony E, and Samsung NX mounts are all new 'designed for digital' mounts that have no hold-over from the days of film cameras. So if you have or are thinking buying a camera with one of these mounts, you can safely skip over this section.

But if you have or are thinking of buying a camera with the Canon EF, Nikon F, Sony A, or Pentax K mount, then this section is worth a read.

The main issue is the coverage of the lens. When digital cameras were first introduced, most of the manufacturers (with the exception of Olympus) carried on using the same lens mounts they had been using for their film cameras.

But, the sensor size used in the first DSLRs (and still used in many today) was smaller than a frame of 35mm film used in film SLRs. This was mostly due to the high costs of large sensor fabrication.

The image sensors used in DSLRs were about the same size as a piece of APS-C film. So they are known as APS-C sized sensors. 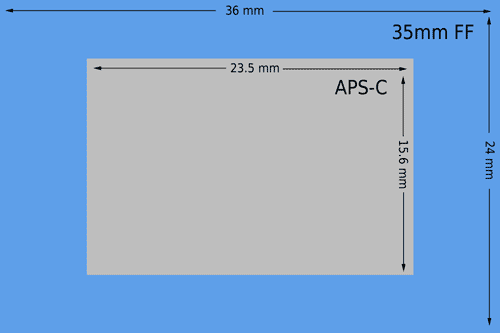 After a while, the manufacturers started to produce lenses specially to fit the reduced sensor size of their digital cameras. This made the lenses smaller and cheaper to manufacture. These lenses covered the smaller size of the digital sensors, but did not produce an image circle large enough to cover a frame of 35mm film.

Different manufacturers use different notations to denote these 'designed for APS-C digital' lenses:

As a note to the above table, Samsung produced a couple of K mount lenses for use with APS-C sized sensors, but their lenses are not specifically labeled as such. Samsung also licensed the Schneider-Kreuznach name for use on some re-badged Pentax K mount lenses, again these lenses are not labeled as to whether they are designed for use with APS-C cameras. 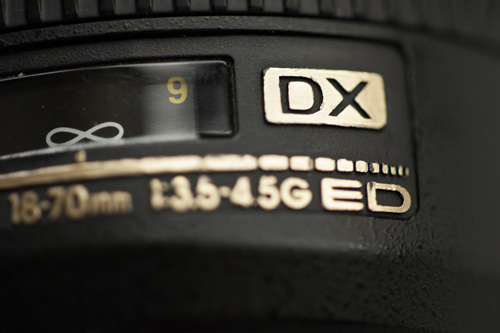 For cameras with APS-C sized sensors, they can accept both 'designed for APS-C' lenses, and lenses designed to cover the image circle covered by 35mm film (full frame).

For cameras with full frame sensors, they cannot properly use a lens designed for use with an APS-C sensored camera. The image circle produced by the lens is just not big enough to cover the full frame sensor.

Of course, cropping the image means you loose image data compared to what you would capture with a lens designed for use with full frame cameras. A DT lens used on the 24.6MP Sony A900 will only produce an 11MP image. The rest of the image has to be cropped away to compensate for the lens' reduced image circle.

The automatic cropping of lenses designed for use with APS-C sized sensors on a full frame camera can be disabled. This gives you a good idea of the reduced image circle that these lenses offer when cropping is disabled: 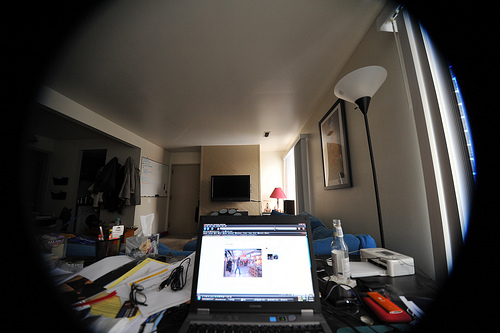 So if you have a full frame camera, or might want to purchase one in the future, you need to consider this when looking at lenses.

With Pentax cameras, you don't (currently) need to worry about whether a lens will be compatible with your camera or not. All Pentax DSLRs use an APS-C sized sensor, and so are compatible with lenses that use the K mount, whether they cover APS-C or full frame.

Some lenses feature built in autofocus motors, while other lenses use what's known as a screw drive, which is driven by a motor in the camera body. Not all camera bodies feature screw drive motors.

So if you buy a lens that relies on the screw drive motor of the camera body, but the camera body doesn't have a motor, then you won't be able to autofocus with that lens.

Canon's EF mount uses a purely electronic linkage with the lens, so all lenses for the EF mount contain a built in focus motor. 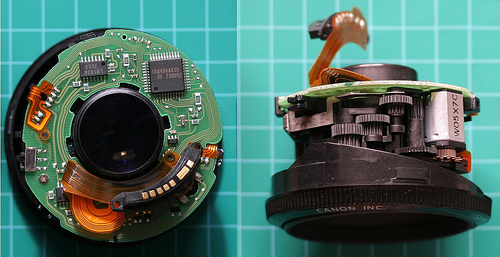 Pentax's KAF2 mount provides a screw drive motor and works with K mount lenses that have a built in focus motor as well.

So there are two possible things you need to look out for if you are looking at a Nikon or Sony camera:

To show that a lens has a built in autofocus motor, manufacturers use various different notations:

Note that Tokina do not have a special designation to show that the lens features a built in motor. Similarly, some Sigma and Tamron lenses may have a built in motor but not feature the HSM / PZD / USD designations. (The designations actually refer to the type of autofocus motor used in the lens).

So it is best the check the specification of the lens if you want to be sure whether or not it includes a built in autofocus motor. All Canon and third party autofocus lenses for the Canon EF mount feature a built-in focus motor. 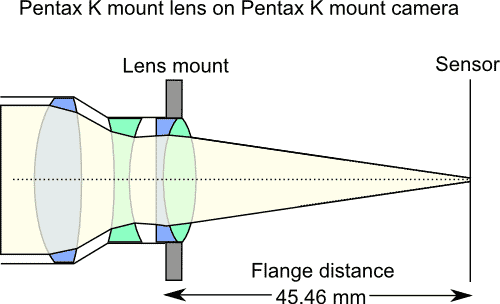 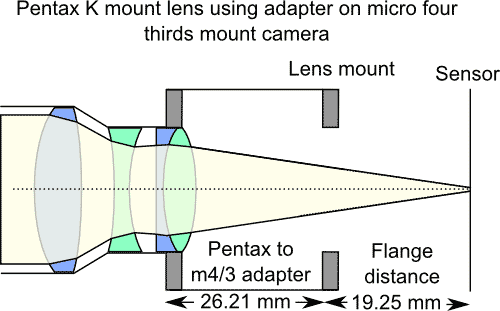 It won't work the other way round, of course. You can't have an adapter that removes 26.21 mm from the Pentax K mount to allow you to use micro four thirds lenses. The lenses would have to go inside the mount!

Example of a lens mount adapter, this one allows Pentax K mount lenses to be used on Micro four thirds mount cameras

As a general rule, a lens mount with a smaller flange distance can use lenses designed for use with a mount with a larger flange distance, provided the correct adapter is used. The exception to this is with some lenses where the rear protrudes back inside the camera. These can cause a problem with DSLRs and SLTs as the rear of the lens might hit against the camera's mirror.

However, you can (in some cases) get adapters that let you use a lens designed for a lens mount with a shorter flange distance than the mount your camera uses. There are two types of these adapters.

There are a large number of old lenses designed for use with lens mounts that are no longer in common use. That means these lenses can often be picked up fairly cheap. When used on a different lens mount via an adapter, they will always be manual focus, and you will also need to control the aperture manually. (Old lenses have an aperture ring you use to set the aperture).

So if you might be interested in using older manual lenses with your digital camera, it is a good idea to check the flange distance for the mount of the camera you are looking at. You can see a good list of different lens mounts and their flange distances at Wikipedia: Flange focal distance. 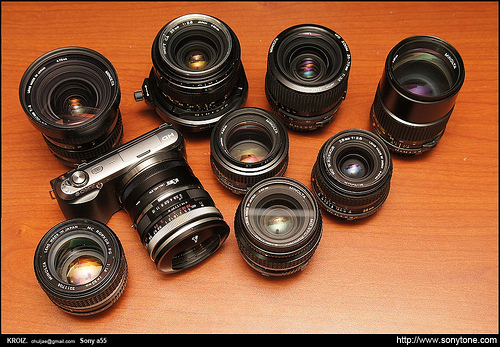 Mirrorless cameras tend to have quite a short flange distance because they don't need any room behind the lens mount for a mirror. This has made them quite popular for mounting old lenses on, and there are a wide range of adapters for using different mount lenses on the micro four thirds and Sony E mount (NEX) cameras.

The lens mount a camera uses affects what lenses you can use with that camera. Most lens mounts have a wide range of different lenses available, and so consideration of the lens mount is not particularly important.

However, the lens mount does become more important if you are looking to use older (and cheaper) manual lenses. It is also important when buying a lens to check that it is compatible with your camera. For most people though, the type of lens mount a camera uses is worth considering, but probably quite far down on the list of important features.